Vaccination and Coronavirus: Where the Public Good Clashes with Choice and Freedom 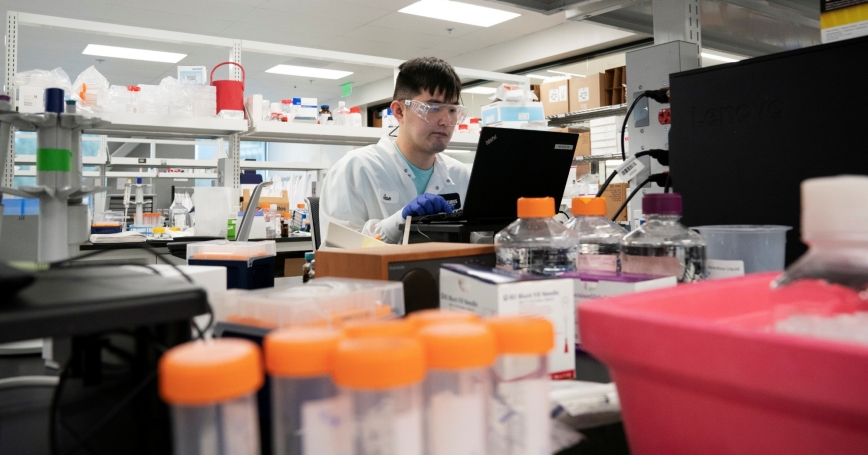 Research assistant Jae-Heon Kim conducts research on a vaccine for the novel coronavirus at a laboratory in San Diego, California, March 17, 2020

by Alina I. Palimaru and Marcus Dillistone

With scientists striving for a viable coronavirus vaccine, and public health officials considering its potential rollout, do calls for freedom of choice and anti-vaccination sentiments, as seen in recent televised protests, represent a worrying omen?

Choice is central to American life, with freedom of speech and of opinion embedded in the U.S. Constitution. But at what point does a communal necessity, such as immunization, outweigh personal choice? How much choice do people in self-acclaimed free societies really have? Choice to murder a troublesome neighbor, or drive through a red light? Of course not. Choosing to avoid taxes or decline a vaccine may be considered acceptable by some, but are arguably a moral failure (PDF) to contribute to the public good.

Herd immunity through vaccination generally requires 75 to 95 percent public participation, with more contagious diseases typically requiring higher uptakes. This majority who chooses immunization protects their whole community, including those who cannot be vaccinated for medical reasons.

The United States chooses to persuade public uptake, rather than legislate for it. There is no federal law mandating immunization. Although viruses don't respect state lines, individual states determine their own vaccination requirements for specific groups, such as children, health care workers, and residents in health care facilities, but there is little regulatory provision for the rest of the adult population, with limited public infrastructure for the mass vaccination of adults.

The majority who chooses immunization protects their whole community, including those who cannot be vaccinated for medical reasons.

Immunization resistance is complex. Concerns over the safety of vaccines may be understandable, but cases of negative reactions are few, and are vastly overwhelmed by the unquestionable benefits. Unsubstantiated anecdotes attributing other acquired ailments to vaccinations are commonplace. Many express hesitancy about some vaccines but not others, and doubts don't necessarily lead to refusal.

The choice to reject immunization seems mostly predicated on questionable notions : a mistrust of science, discredited work in vaccinology, suspicion of government, flawed anecdotes, the notion of “individual self-management” and even conspiracy theories about people associated with vaccine research, such as Bill Gates.

Even before the coronavirus pandemic, the U.S. Public Health Service and others considered a lack of accurate information about vaccines and disparities in access to immunization to be significant public health concerns. When only a small minority refuses immunization, self-exemption is politically tolerable provided the general uptake meets the percentage necessary for herd immunity.

Unfortunately, data tell us that the ease of securing personal belief exemptions has contributed to a decrease in vaccination protection among schoolchildren. With adults, an insufficient uptake of vaccines has led to an estimated annual death toll of 40,000 from vaccine-preventable diseases. In 2017, the Centers for Disease Control and Prevention reported that immunization coverage among U.S. adults was low, despite an annually updated and recommended U.S. Adult Immunization Schedule (PDF).

In 2019, the World Health Organization ranked vaccine hesitancy as one of the top 10 threats to global health. All these factors suggest that the current socio-political trajectory in the United States does not bode well for a potential coronavirus immunization program. Of course, there is no guarantee that a COVID-19 vaccine will be produced, but if it is, the population should expect a vaccination campaign. Any immunization initiative will need to tackle vaccine hesitancy head on, as well as consolidate the fragmented regulatory infrastructure.

The current socio-political trajectory in the United States does not bode well for a potential coronavirus immunization program.

Some warn that compulsory vaccination is likely to inflame public sentiment and lead to legal battles on the constitutionality of non-medical exemptions, so more nuanced policy tools, such as increasing the difficulty in obtaining non-medical exemptions and stricter oversight of exemptions, may be effective. There is a general perception that the delivery of a coronavirus vaccine will mark the end of COVID-19, and will be resoundingly celebrated, but will this be enough to garner mass compliance coast-to-coast, especially for a new vaccine without years of demonstrable public efficacy?

Educational programs that convey the historical benefits of vaccinations, and that present the rigors of modern vaccine development, may correct misconceptions, tackle unwarranted mistrust, and lead many skeptics to choose vaccination voluntarily. In parallel with public information initiatives, a logistical infrastructure must be established to deliver the vaccine effectively nationwide. Such information initiatives and infrastructure investments will require sufficient funding to reach the whole population. It's a huge ask, especially in a fractured U.S. health care system, but the cost of being ill-prepared is likely to be way worse.

The fact that some states are collaborating with their neighbors for a more consistent pandemic response helps advance the notion of a nationally coordinated campaign for vaccination. Federal leadership and effective persuasion will be imperative, but whatever happens, legislative intervention for vaccination uptake may be necessary, because sometimes choice kills.

Alina Palimaru is an associate policy researcher at the nonprofit, nonpartisan RAND Corporation. Marcus Dillistone is member of the Royal Society of Medicine.