An Israeli Escalation Against Iran? 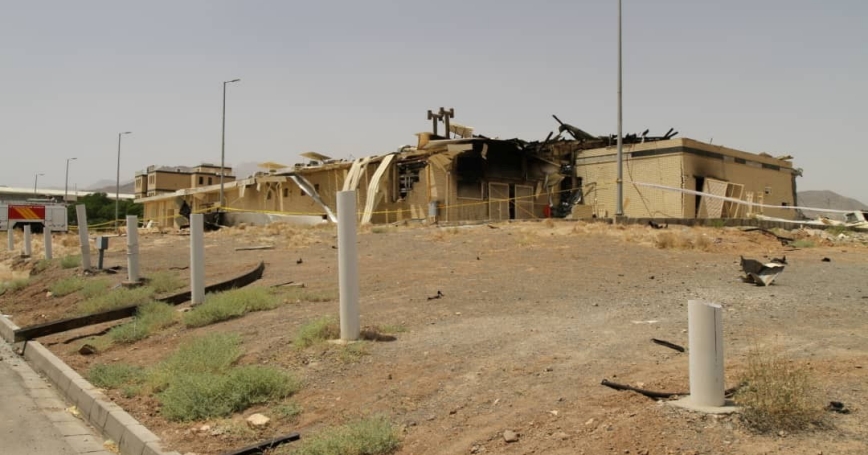 A view of a damaged building after a fire broke out at Iran's Natanz Nuclear Facility, in Isfahan, Iran, July 2, 2020

Over the last few weeks, Iran has been hit by a series of unusual explosions at such sensitive facilities as its nuclear enrichment complex, factories, and gas pipelines. Many analysts and diplomats suspect sabotage by Israel, the United States, or some other outside force. While reliable information from within Iran is difficult to come by, and conflicting accounts are emerging, at least two of the incidents occurred at sites linked to Iran's missile and nuclear programs. The New York Times quoted a “Middle Eastern intelligence official” claiming that Israel planted a bomb at the Natanz nuclear facility in the building where Iran had resumed work on advanced centrifuges. The Times of Israel reported that the “official” may be Mossad head Yossi Cohen.

These incidents reflect growing tensions and escalation between Iran and the United States and Israel since the Trump administration withdrew from the Iran nuclear deal, or Joint Comprehensive Plan of Action (JCPOA), in May 2018. Heightened tensions (PDF) between Washington and Tehran are a familiar story, including a targeted U.S. drone strike that killed Gen. Qasem Soleimani, the Iranian commander of the Quds forces, the foreign operations arm of the Islamic Revolutionary Guard Corps (IRGC), in January. Iran retaliated by launching a dozen missiles at Iraqi bases, one of which housed U.S. personnel.

Israel's escalating conflict with Iran is not as well understood. Several factors give weight to the reports that Israel might have found this an opportune time to attack a facility like Natanz—and may even be engaged in a larger campaign of sabotage.

Like top Trump administration officials, Israeli policymakers believe that Iran is especially vulnerable now. Based on conversations with Israeli analysts, they view the combination of the U.S. “maximum pressure” campaign, sanctions, the pandemic, and the aftermath of last fall's massive protests as weakening a constrained Iran. With few exceptions, Israeli security analysts and officials widely view the Soleimani killing as a success and endorse the Trump administration's narrative that the operation restored deterrence to prevent further Iranian attacks against U.S. personnel and regional partners.

In the Israeli view, Iran is weakened and isolated, creating more favorable conditions for kinetic actions.

Never mind that rocket attacks against U.S. forces by Iranian-linked military in Iraq have continued, killing two U.S. and one British service member in March. Or that Iran has launched a military satellite and attempted a cyberattack against Israeli water infrastructure in April, provoking an Israeli counterattack. Or that few other nations supported the U.S. attempt to gain international support for extending the U.N. arms embargo that is set to expire this October. In the Israeli view, Iran is weakened and isolated, creating more favorable conditions for kinetic actions. A former intelligence chief for the Israel Defense Forces voiced a common view in Israel that the Iranians are waiting out the Trump administration, hoping for a better agreement under a Biden presidency.

Second, an Israeli attack on Iran's nuclear facility would fit the emerging Israeli doctrine of striking Iran itself. Coined the “Octopus” doctrine by Israeli politician Naftali Bennett, the strategy involves directly attacking Iranian personnel in Syria and Iraq, not just proxies like Hezbollah. For years, Israel has been waging a “campaign between wars” to prevent Iranians from gaining a foothold on Israel's border with Syria. But over the last year, Israel expanded that campaign to Iraq, a far more sensitive theater, given the significant U.S. presence.

What's more, Israeli leaders have become more willing to acknowledge openly that Israel is behind these attacks, shifting the so-called shadow war with Iran into an open and direct conflict.

Israel's History of Targeting Nuclear Sites in the Region

Israel has a history of targeting nuclear sites to prevent other regional powers from developing nuclear weapons. Israel bombed the Iraqi nuclear reactor at Osirak in 1981; the Syrian nuclear facility at al-Kibar in 2007; and reportedly helped test the Stuxnet computer worm that the United States used in its cyberattack on Iran's nuclear centrifuges in 2009.

Even if these operations were tactical successes, it is less clear whether they produced strategic gains. In some cases, they may have only increased regional proliferation risks. For example, political scientist Målfrid Braut-Hegghammer found archival evidence that Israel's strike on Osirak propelled Saddam Hussein to embark on a covert nuclear program for a decade. That was only effectively halted in the decade after the 1991 Gulf War, when the International Atomic Energy Agency removed Iraq's weapons-related nuclear material and destroyed all known nuclear facilities.

The 2009 Stuxnet operation successfully destroyed Iranian centrifuges. But like the Osirak attack, that appeared to only deepen Iran's resolve to clandestinely develop a nuclear program. At best, it just bought time. Even after Stuxnet, Iran advanced its nuclear program so much that it could have converted its uranium to weapons grade material in just weeks, according to some accounts. The JCPOA restrictions on centrifuge development, enrichment levels and stockpiles extended that period—called its “breakout time”—to approximately a year. That's consistent with findings that, historically, diplomacy and international arms control missions have been more successful in curbing regional nuclear ambitions than unilateral military strikes and cyberattacks.

Finally, Washington isn't pushing back against potential covert actions against Iran; in fact, the New York Times recently reported that the United States may be coordinating such operations with Israel. At the very least, Israel is likely to believe it has a green light. Nor do Israel's political or security establishments appear to be debating the merits of military options against Iran, as they have in the past.

Given these conditions, Israeli involvement in the Natanz explosion would not be surprising—and more such attacks might be coming. However, Israel's bet that the Iranians will not respond is risky. It's hard to control escalation when things are so volatile, especially as hardline Iranian leaders may increase pressure to retaliate. Israel and the United States may be pushing Iran toward recommitting itself to a nuclear weapons program and dangerous regional actions.

Dalia Dassa Kaye is a senior political scientist and director of the Center for Middle East Public Policy at the RAND Corporation.

This commentary originally appeared on The Washington Post Monkey Cage Blog on July 15, 2020. Commentary gives RAND researchers a platform to convey insights based on their professional expertise and often on their peer-reviewed research and analysis.