Are U.S.-Japan Relations on the Rocks? 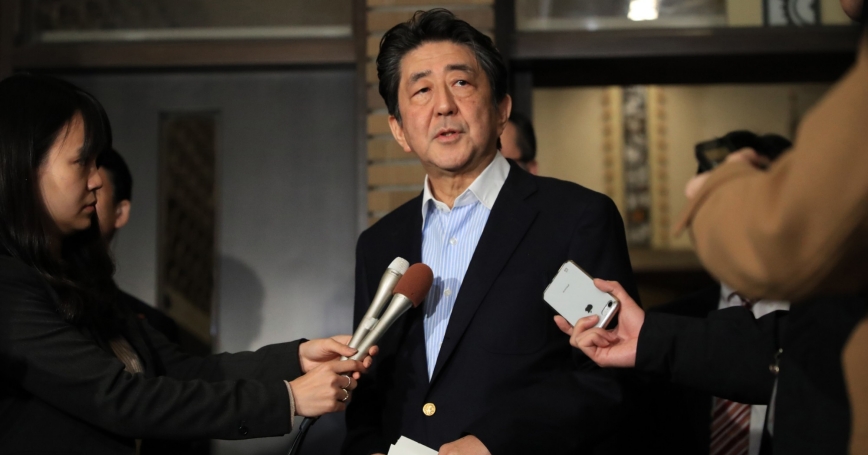 Japan's Prime Minister Shinzo Abe speaks to the media after having a telephone discussion with U.S. President Donald Trump, in Tokyo, December 21, 2019

The Trump administration is clearly willing to criticize traditional U.S. allies. Be it personally criticizing Canadian Prime Minister Justin Trudeau, criticizing British Prime Minister Theresa May's handling of Brexit as “foolish” and a “disaster” or repeatedly complaining that NATO members are not spending enough on their own defense, Trump has put U.S. allies on guard. Even in the Indo-Pacific, Trump has pressured Seoul to increase its contributions to the alliance and said he wants to withdraw troops from South Korea.

Japan, for the most part, has been a notable exception. Prime Minister Shinzo Abe has developed probably the closest and most time-intensive personal relationship with President Trump of any major democratic ally, and for the most part he has been spared the level of criticism that the president has leveled at a number of other U.S. allies. The Japanese government also appreciates Washington's more robust defense posture in the Indo-Pacific, which parallels the views in Japan's 2020 defense white paper (PDF) that China is the region's greatest security threat.

The relationship between the national security establishments in Washington and Tokyo appears to be close and trusting, matched only by Japan's relationship with Australia. Even the Trump administration's signature strategy for dealing with China—the “Free and Open Indo-Pacific (PDF)” strategy—was borrowed enthusiastically from planners in Japan's foreign ministry in 2017. To the likely ire of Democrats in Washington who follow Japan, an anonymous Japanese senior official wrote an op-ed in The American Interest in April praising Trump and arguing that his reelection would be better for Tokyo.

There are structural and ideological reasons for the Japanese government's readiness to work closely with the Trump administration. But it's Abe's patience and personal diplomacy with Trump that have likely impressed European diplomats incapable of getting their leaders to do the same. Though perhaps not as personal as some of the criticisms against European leaders, Abe has had to weather his own list of issues with Trump, including: Steel tariffs; unilateral withdrawal from the Trans-Pacific Partnership (TPP), which is a cornerstone of Japanese trade strategy in Asia; reported demands for a four-fold increase in payment for hosting U.S. bases in Japan; casual threats to withdraw U.S. forces from South Korea, which would leave Japan exposed to the ongoing North Korean threat; and the president's lack of interest in multilateral meetings such as the East Asia Summit and the G-7 that are crucial to Japan's diplomacy.

Yet Abe has never criticized Trump publicly as his European and Canadian counterparts have. Instead, he has patiently tutored the president on diplomatic and security issues during long golf games; tried to bridge his European and American counterparts at sometimes contentious G-7 meetings; worked with member states in the TPP to keep a place at the table for the United States while they moved ahead with the new Comprehensive and Progressive Trans-Pacific Partnership; and brushed aside opposition criticism of the United States in the Diet. This “yosh yosh” (“now now…”) diplomacy has been good for Japan, the United States, and even Europe.

But suddenly, in the span of only a few months, the alliance appears weaker in ways that no one anticipated. In June, Japan suspended, then cancelled, its planned deployment of two Aegis Ashore systems, a ballistic missile defense system. The surprise cancellation rocked an alliance used to close coordination, particularly one that carries operational benefits to both American and Japanese national security interests alike.

Then, the Japanese Defense Ministry announced that it would produce its next jet fighter indigenously, rejecting plans by U.S. firms in order to benefit Japanese industry, ensuring higher costs and longer production times. In the economic domain, reports surfaced that Japanese firms have been helping China build out its 5G network in China with Japanese equipment, despite years of close U.S. and Japanese government cooperation designed to stop Huawei's predatory policies. And most recently, a respected Japanese scholar and pro-alliance national security analyst who is close to Abe, Yuichi Hosoya, said in an interview that the time had come for Japan to reassess its overreliance on the United States and build its own defense capabilities, questioning whether the United States would remain committed to Japan's defense. Hosoya's comments struck a nerve because he vocalized what many Japan watchers have been increasingly hearing in private about Japan's concerns with the United States.

By themselves, these events would not be worrying; collectively, they may form a problematic trend. We can at best speculate on the reasons why. One factor may be both Abe's and Trump's falling political polls in the wake of COVID-19, leading Japan to consider hedging strategies. Another factor could be a growing concern in Tokyo that the more reliable checks on Trump's excesses were lost when Secretary of Defense James Mattis and National Security Adviser John Bolton left their jobs. We suspect that the Trump administration's poor performance in responding to the pandemic is also a factor in how Japanese leaders judge American reliability. And in private, some officials speak of fatigue at managing a disruptive president who shows no signs of steadying or becoming more reliable.

The growing threat from China means that Washington and Tokyo need each other more than ever.

There is not cause for concern about Japan abandoning the alliance with the United States. Abe came back to power promising (PDF) a stronger U.S.-Japan alliance and has given no indication that he is abandoning that promise. Nor are any of the major political figures trying to replace him challenging the alliance relationship. Moreover, the growing threat from China means that Washington and Tokyo need each other more than ever. But the growing points of friction and uncertainty in the relationship carry negative consequences, particularly given that even though polls show that the Japanese public supports the alliance, they also reveal that trust in the United States and President Trump has dropped precipitously. And it sends the wrong message to Tokyo that the next U.S. envoy is cooling his heels waiting for confirmation.

The concern is not that Japan somehow defects, but that Tokyo and Washington could let growing irritation and uncertainty distract them from the increased work that must be done to preserve a truly free and open Indo-Pacific. The White House website and the campaign website of presumptive Democratic presidential nominee Joe Biden both speak to the importance of the U.S.-Japan alliance. That is a very good thing, but alliances do not run on auto pilot. They take work. Lest the allies are prepared to let the current troublesome trends continue, more attention should be paid to what has otherwise been a reliably solid relationship.

Michael J. Green is the senior vice president for Asia and Japan chair at the Center for Strategic and International Studies, and director of Asian Studies at the Edmund A. Walsh School of Foreign Service at Georgetown University. Jeffrey W. Hornung is a political scientist at the nonprofit, nonpartisan RAND Corporation.

This commentary originally appeared on The Hill on July 17, 2020. Commentary gives RAND researchers a platform to convey insights based on their professional expertise and often on their peer-reviewed research and analysis.