Can America Weaken the Russia-Iran Axis? 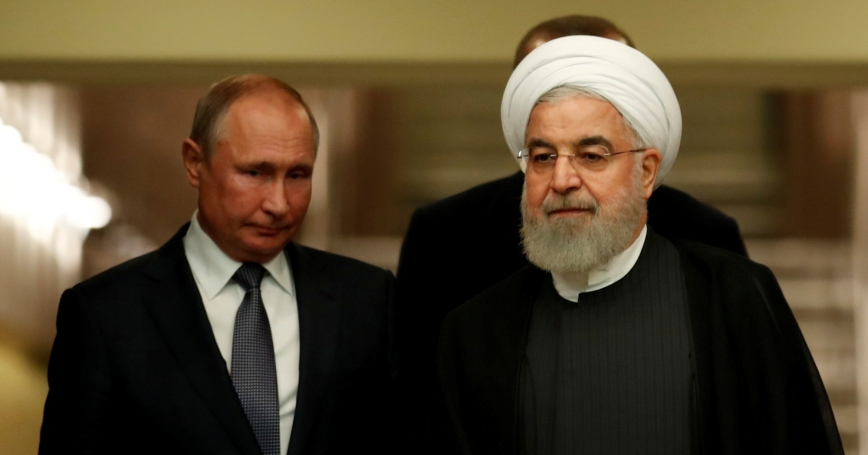 Presidents Vladimir Putin of Russia and Hassan Rouhani of Iran arrive for a news conference in Ankara, Turkey, September 16, 2019

America's slow-motion retreat in Syria could embolden Iran and Russia and perhaps lead them to underestimate U.S. resolve to protect its interests in the Middle East. Clearer U.S. priorities and more deliberate engagement could reduce risk and help avoid miscalculation.

In Afghanistan, Syria, and elsewhere in the Middle East, a U.S. military drawdown combined with modest diplomatic exertion is signaling irresolution and weakness. Not surprisingly, Russia and Iran are teaming up to hasten these trends.

In several theatres, Russia is on the offensive. In eastern Syria, it is deploying forces closer to U.S. troop positions. In Afghanistan, the U.S. is investigating whether three American soldiers died from explosives detonated by Taliban insurgents who might have received bounties from Russia. In Iraq, the government is exploring deeper military ties with Russia, most likely in part as a hedge against a potential U.S. pullback and in response to the U.S. assassination of Iran Quds Force chief Qasem Soleimani. In Libya, Russian combat aircraft and mercenary forces have deployed to help rebels oppose the United Nations-backed government.

Meanwhile, Iran is reaching out to Russia. On July 21 Foreign Minister Javad Zarif made his second visit to Moscow in a month. In Syria, Iran and Russia have propped up the brutal Assad regime and watched idly as the U.S. bore the burden of destroying the Islamic State.

Even though at various points Iran and Russia have grown frustrated with Assad, they have advanced their cooperation. Advisers from the Quds Force have operated alongside Russian officers to assist Syrian forces. Iranian and Russian proxy forces—including Lebanese Hezbollah, Wagner Group mercenaries, and Shia militias from Iraq—have combined their energies. Moscow and Tehran also have some overlapping interests in the South Caucasus and Central and South Asia.

The Pentagon has voiced concern about a Russia-Iran relationship that transcends the conflict in Syria and involves training, exercises, and weapons sales elsewhere.

Iran and Russia may have set up camps to train Taliban fighters and helped ship them arms. Both seek a compliant Afghanistan and are arming local assets to give them clout. And while this alone is not a reason for the United States to remain in Afghanistan, it should be recognized as one of several likely potential outcomes if and when Washington does draw down in earnest.

Although Russian-Iranian cooperation is not new, U.S. policy shows the risks of narrowly conceived policy choices to harm other American interests. In October 2018, the U.S. withdrew troops from parts of northeast Syria at the expense of Kurdish allies. Russia has sought to fill the power vacuum and exert more control, and Iran has had more opportunity for mischief. Last March U.S. partner forces clashed with Iranian-linked militias near al-Tanf, but it is mostly Israel that pressures Iranian forces in Syria.

By withdrawing from the Iran nuclear deal the U.S. has alienated European allies and assisted Iran and Russia to enhance their international stature.While some have argued that the "maximum pressure" is significantly hurting Iran, however difficult that is to measure, one clear implication of Washington's more aggressive posture toward Tehran is that it has led the regime to accelerate diplomacy aimed at securing new and more wide-ranging bilateral relationships, many with U.S. adversaries.

Even China is abetting the Russia-Iran axis. Last December the three countries participated in Marine Security Belt in the Indian Ocean and the Gulf of Oman, their first trilateral naval exercise.

As U.S. elections near, the time may be ripe for deeper debate on U.S. interests in the region, including how Russia and Iran may jeopardize them.

As U.S. elections near, the time may be ripe for deeper debate on U.S. interests in the region, including how Russia and Iran may jeopardize them.

This could help America better understand its interests, which would be best served by giving a higher priority to diplomacy in stemming Iran's nuclear activities, while retaining military contingents in Syria and Afghanistan to counter Iranian and Russian malign activities.

Since the invasion of the Iraq war in 2003, the United States has not put forth a consistent foreign policy in the Middle East. In particular, U.S. policy involving Russia and Iran in the Middle East has struggled for coherence. For example, if U.S. troop reductions are divorced from other regional foreign policy objectives, this could undercut diplomacy to isolate the Assad regime and keep NATO allies engaged in Afghanistan.

Without a more frank discussion of costs and benefits of the current approach, Washington may be unable to marshal sufficient support to achieve its goals. U.S. allies and Congress may be less likely to back policies that seem torn between pressuring Iran to stop interfering in Syria and pulling US forces out of Syria. Likewise, U.S. policies may lack for support if they seek to oppose Russian intervention in Syria but leave Moscow more running room in Afghanistan as U.S. troops draw down.

Without military and diplomatic exertion, the U.S. may be unable to secure its interests in Middle East conflict zones where Iran and Russia are joining sides to exploit American retrenchment.

Colin P. Clarke is senior research fellow at The Soufan Center and an assistant teaching professor at Carnegie Mellon University's Institute for Politics and Strategy. William Courtney is an adjunct senior fellow at RAND and was U.S. ambassador to Kazakhstan, Georgia, and a U.S.-Soviet commission to implement the Threshold Test Ban Treaty.

This commentary originally appeared on Newsweek on July 30, 2020. Commentary gives RAND researchers a platform to convey insights based on their professional expertise and often on their peer-reviewed research and analysis.