Demystifying the Belt and Road Initiative 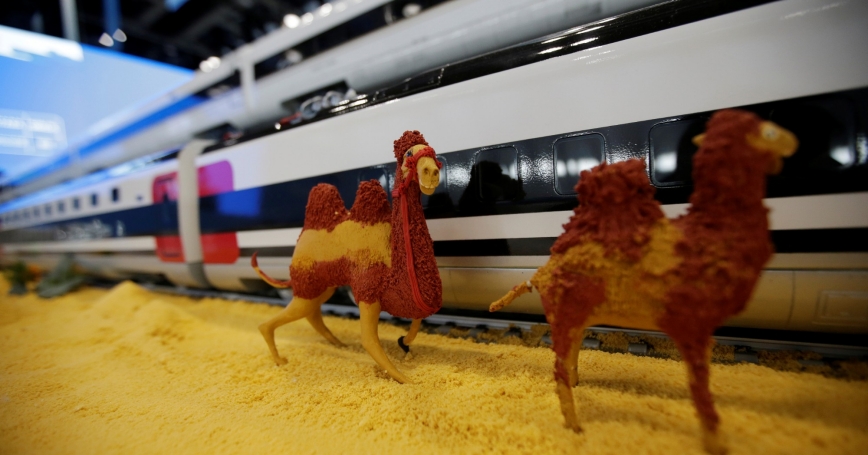 A replica of China Railway high-speed trains at a media center for the second Belt and Road Forum, in Beijing, China, April 26, 2019

Until 1999, China was the largest borrower from the International Development Association (IDA), the member of the World Bank Group responsible for lending to the world's poorest countries. Two decades of high growth later, in 2019, China overtook the World Bank as the world's largest lender of development finance.

This remarkable change is owed primarily to the Belt and Road Initiative (BRI), a global infrastructure plan conceptualized in China in 2013 and which has been implemented in more than 70 countries. Under the BRI, China works with partner countries to design and implement large infrastructure projects.

International infrastructure aid dates back to the Marshall Plan of 1948 and has been a regular feature of foreign aid to developing countries ever since. So, what is unusual or new about the BRI? In fact, there are several aspects to the BRI that make it particularly notable even beyond China's turnaround from borrower to lender.

One interesting aspect of the BRI is that while most of the partner countries are developing countries, several are high-income countries, such as Greece and Italy. Chinese firms own stakes in over a dozen European ports. The largest such investment is by Cosco, a Chinese state-owned enterprise, which purchased a majority stake in Piraeus port in Greece in 2016 and has since invested several hundred million dollars in upgrading the port. As a result, Piraeus is now the largest container port in the Mediterranean and the fourth largest container port in Europe.

Still, success stories aside, why are countries of all stripes turning to China for funding when the world is awash with cash? Traditionally, such countries have preferred to work with the World Bank and other multilateral lenders, which provide borrowers with good practices, while making significant funding available on a meritocratic rather than political basis.

From a developing country viewpoint, accessing the world's spare capital has been difficult because of the risk entailed in many such investments. The Asian Development Bank estimates that Asian countries face an infrastructure investment gap of $459 billion a year. Pakistan provides an example. As a poor state with weak infrastructure, Pakistan needs several billion dollars a year of foreign aid if it is to overcome its infrastructure challenges. Yet, its largest infrastructure investment, excluding the BRI projects, is a $382 million project, funded by a loan from the World Bank to develop a bus rapid transit system in the port city of Karachi.

By comparison, the BRI in Pakistan, termed the China Pakistan Economic Corridor (CPEC), will bring in investments of $62 billion over a ten-year period. The projects include transportation, communication, and energy investments that are located in overlapping zones, enabling comprehensive economic development. Already, Pakistan's energy sector has been transformed with CPEC investments that will total $33.79 billion by 2023, and will add 17 Gw of electricity capacity to an existing base of 28 Gw, i.e., an increase of 60 per cent.

Transformative, national-scale investment is naturally attractive to poor countries, and helps explain why they, as well as some rich countries, are willing to turn to the Belt and Road initiative.

CPEC is typical of BRI projects, now under way in a number of countries. Such transformative, national-scale investment is naturally attractive to poor countries, and helps explain why they, as well as some rich countries, are willing to turn to the BRI. In return, they appear willing to accept that the investments will connect them more closely to China—this is most evident through observing the geography of projects, but also through increasing these countries' reliance on Chinese project management and operating systems, and through transacting increasingly in renminbi.

It's worth remembering that despite its reputation as a leading economy, China is still a middle-income country with per capita income just a quarter of that of the average high-income country. An estimated 373 million persons, or about a quarter of China's population, still live below the poverty line. But as a nation, it has a high savings rate of about 47 per cent on an economy of over $13 trillion a year that has enabled it to channel substantial sums towards the BRI. Comparably, the United States, with a savings rate of about 19 per cent on an economic size of $21 trillion, saves less in absolute terms.

This brings us to what is likely China's strongest motive behind the BRI: long-term economic security. The maritime routes of the BRI will help the relatively underdeveloped, landlocked areas of China such as Yunnan and Xinjiang provinces by linking them with ports in the more rapidly growing areas of Asia. At the same time, the emerging land routes of the BRI are developing an alternative to the South China Sea, through which most of China's trade currently passes and which is becoming a zone of contestation between the United States and China.

To be sure, the onset of the COVID-19 pandemic will, in the short-run, disrupt supply chains being built up under the BRI and make funding less available. This will be a feature of all infrastructure projects, not just the BRI. China has already signaled a flexible approach to rescheduling sovereign debt. And this will likely address the main short-term concern of the borrowing countries.

Longer term, the linking of countries through the BRI's transport, energy, and communication grids will connect people in ways previously not experienced. This may have both positive and negative consequences. For instance, improved access to essential medical supplies and trained personnel due to the BRI grid will need to be balanced by the risk of faster spread of COVID-like diseases. If, and this is not a given, poor countries use the increased wealth generated by the BRI to improve resilience to health risks, the BRI could be a valuable tool to improve their health security as well. If not, some short-term gains from the BRI could well disappear in the long-term.

This commentary originally appeared on Encompass on July 6, 2020. Commentary gives RAND researchers a platform to convey insights based on their professional expertise and often on their peer-reviewed research and analysis.