How to Reform Military Gear Transfers to Police 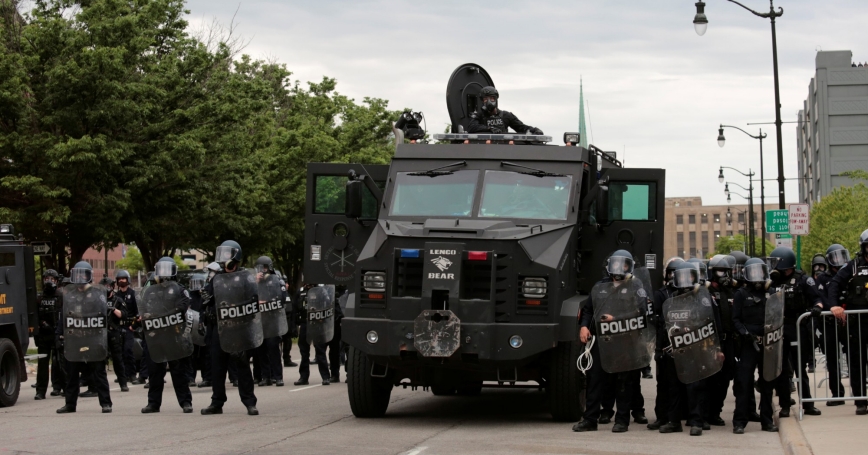 Detroit police line up next to an armored vehicle following a rally against the death in Minneapolis police custody of George Floyd, in Detroit, Michigan, June 1, 2020

Police officers equipped like soldiers have appeared on the streets of American cities amid the protests over George Floyd's killing, renewing concerns about “militarization of police.” Some federal lawmakers have called to overhaul or terminate the 1033 program, named after a section of the U.S. Code, which allows the Defense Department to transfer surplus equipment to federal, state, local, and tribal law enforcement agencies. But legislators should consider options short of elimination.

Concerns about the program have persisted, resulting in at least eight reports by the Government Accountability Office since 2000. After the 2014 protests in Ferguson, Missouri, we conducted a congressionally mandated independent review of the 1033 program. We found that the program was professionally managed and beneficial to law enforcement but little known and poorly understood by the public.

The Defense Logistics Agency's Law Enforcement Support Office, or LESO, runs the 1033 program. Only about 3,000 of the nation's 17,000 law enforcement agencies participate in it regularly. Those that do run the gamut, from the New York State Police to the Big Horn County, Wyoming, Sheriff's Office.

LESO equipment falls into two categories: uncontrolled and controlled equipment. The former includes things like hand warmers, generators, desks and office supplies. From 2015 to 2017, about 2.2 million such items were distributed, worth about $1.2 billion.

Controversy stems from the controlled items. This equipment—including firearms, armored personnel carriers and night-vision goggles—is more expensive and technically sophisticated. It also tends to be more visible and can be used in situations involving deadly force. From 2015 to 2017, the Pentagon transferred about 3,000 controlled items worth about $775 million to law enforcement.

To receive controlled items, a law enforcement agency must demonstrate it has a need for such equipment and civilian executive support for the acquisition—for example, the approval of a mayor or board of supervisors. Controlled equipment remains the property of the Pentagon and must be returned when it's no longer needed.

LESO compliance audits have revealed that some law enforcement agencies have lost controlled equipment and, as a result, they've been suspended or terminated from the program. The GAO once found that LESO approved transferring equipment to a fictitious organization. After these failings, LESO implemented measures to strengthen program management.

We surveyed U.S. citizens about the 1033 program in August 2017. We found that 48% of Americans weren't familiar with the program. Once the program was explained to respondents, a plurality—including 46% of Black respondents, 38% of Hispanic respondents and 37% of white respondents—said transfers should be limited to nonlethal equipment.

How should lawmakers reform a program that makes use of excess equipment and is popular with police departments, but that also raises substantial concerns about the militarization of policing?

How should lawmakers reform a program that makes use of excess equipment and is popular with police departments, but that also raises substantial concerns about the militarization of policing?

We identified three potential courses of action. The first was to leave the program unchanged. This is largely the path chosen by the Trump administration, which overturned modifications the Obama administration made after 2014.

A second approach is to modify the program's emphasis. Currently, 1033 gives preference to applicants that will use the equipment in drug enforcement, counterterror and border control—all associated with aggressive policing tactics such as no-knock warrants. Eliminating those preferences—or creating new ones, such as support for community policing or search and rescue—could reduce perceptions of militarization.

Congress could also stipulate that 1033 won't be the first provider of potentially controversial equipment. Police departments would have to buy their own night-vision goggles, for instance, before applying for more. This might place a financial burden on smaller agencies, but it would ensure that agencies think hard before requesting more equipment.

The third option is to shift responsibility for controlled equipment—including management of applications, allocation, and monitoring—to the Justice Department, which has more frequent interactions with most law enforcement agencies than the Pentagon does. Justice also has broad responsibilities for tracking, evaluating and improving the performance of American law enforcement. While LESO could continue to manage the physical distribution of equipment, Justice would be better at performing oversight.

It's appropriate that the 1033 program is part of America's long-overdue debate on policing. We think the program still adds value—but reforming it could improve oversight while allaying concerns about the militarization of U.S. police.

Jack Riley is vice president and director of the National Security Research Division at the RAND Corporation. Aaron Davenport, a senior policy researcher at RAND, served as White House special adviser for homeland security and counterterrorism, 2007–09.

This commentary originally appeared on The Wall Street Journal on June 14, 2020. Commentary gives RAND researchers a platform to convey insights based on their professional expertise and often on their peer-reviewed research and analysis.