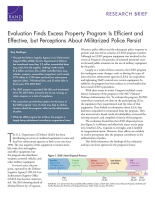 The U.S. Department of Defense (DoD) has been distributing its excess or outdated equipment to state and local law enforcement agencies at little or no cost since 1990. The vast majority of this equipment is routine items like tools, first aid supplies, and office equipment, but the program also distributes weapons, armored vehicles, and other military equipment.

In recent years, the program, operated by the Defense Logistics Agency's (DLA's) Law Enforcement Support Office (LESO), has become controversial. The 2014 shooting death of Michael Brown by a Ferguson, Missouri, police officer and the subsequent police response to protests and riots led to scrutiny of LESO program transfers. Although no LESO program equipment was involved in the events at Ferguson, the presence of armored personnel carriers focused public attention on the use of military equipment by the police.

Largely as a result of these concerns, the LESO program has undergone many changes, such as altering the types of items that law enforcement agencies (LEAs) can requisition and tightening DoD's control over certain equipment. In addition, the program has been subject to several audits that have tested LESO's procedures.

With these issues in mind, Congress included a mandatory evaluation of the program in the 2017 National Defense Authorization Act. To evaluate the program, RAND researchers examined raw data on the participating LEAs, the equipment they requisitioned, and the value of that equipment. They looked at information about LEAs that had been suspended or terminated from the program. They also interviewed a broad swath of stakeholders, reviewed the existing research, and compiled a history of the program.

The evaluation found that the LESO disposal process (see Figure 1) is efficient and effectively reuses excess property, benefits LEAs, responds to oversight, and is faithful to congressional intent. However, these efforts are unlikely to resolve perceptions that the program contributes to the militarization of police.

This brief summarizes the findings of the evaluation and lays out three options for the program's future.

What Property Is Transferred to LEAs?

From hand warmers to laptops to rifles, more than 7,000 unique types of items were transferred to LEAs through the LESO program in fiscal years (FYs) 2015 to 2017.

Equipment frequently associated with military functions, such as humvees and night vision equipment, represents less than 5 percent of transfers by volume. On the other hand, some of the most frequently transferred individual items include those that are common to both the military and LEAs, such as rifles and cartridges.

LESO distinguishes between "uncontrolled" property — routine items such as office furniture, emergency generators, and computers — and "controlled" property — certain military equipment such as firearms, night vision goggles, and many vehicles. Uncontrolled property becomes the permanent property of the LEA after one year and is no longer part of the federal inventory. Controlled equipment remains the DoD's property, and LEAs must return it when it is no longer needed.

NOTE: The bars reflecting 1 percent of respondents are not visible.

Since the program began in 1990, DoD has transferred a total of $6 billion in excess property — both controlled and uncontrolled — to LEAs. As of FY 2016, LEAs possessed nearly 1.6 million items worth nearly $1.9 billion that were still in the federal inventory (see Figure 4 for property transfers by state).

How Many LEAs Were Suspended or Terminated from the Program?

During FYs 2014 to 2016, 268 LEAs were suspended (see Figure 5), and 24 were terminated from the program. All but one of the suspensions were of state LEAs — North Carolina and Montana had the most suspended LEAs, with 23 percent and 10 percent of the total, respectively. Seven states — Alabama, Alaska, Minnesota, New Jersey, North Carolina, Ohio, and Rhode Island — and the U.S. Virgin Islands were suspended from the program. The most frequent justifications for LEA suspensions were lost, missing, or stolen weapons or a chronic lack of compliance.

Many Stakeholders Find the Program Valuable, While Many Americans Are Unaware It Exists

The researchers found that many stakeholders value the program. DoD deems it an efficient way to dispose of old equipment. LEAs can access at little or no cost equipment that protects officers and gives them more resources to do their jobs. And lawmakers view it as a way to help them act as good stewards of taxpayer resources. Even stakeholders who are concerned about police militarization did not advocate for the program to be completely abolished, but they did suggest that requests for excess equipment be tied to the requirement that LEAs be trained in how to use it and that equipment like bayonets and armored vehicles be off-limits.

Meanwhile, many Americans are unaware the program exists, according to the results of RAND's large survey, the American Life Panel; almost half of the respondents had not heard of the program (see Figure 6). Of those who do know about the program, 33 percent find the transfers valuable, and 20 percent view them as detrimental. More than 40 percent support limiting the program to nonlethal equipment, while 38 percent think there should be no limitations at all.

The Program Has Been the Subject of Two Recent Executive Orders

In response to the events of Ferguson and after extensive study, President Barack Obama issued Executive Order 13688, which required LEAs to justify their need for controlled equipment, provide evidence of the training to use it, and have approval from the civilian governing body in their communities. It also added some equipment (for example, bayonets and tracked vehicles) to a list of items that are prohibited from distribution. The state coordinators we interviewed said the most significant changes were the justification requirements and the increase in paperwork.

In 2017, President Donald Trump revoked EO 13688 when he issued EO 13809. As a result, LESO is reverting to operating procedures prior to EO 13688. However, few significant changes are expected in the types or quantities of equipment that LEAs requisition.

Government Audits Have Highlighted a Lack of Internal Controls

The U.S. Government Accountability Office (GAO) has paid close attention to the program since its inception. Over the years, GAO has issued eight reports identifying issues with DoD's overall management of excess property and made 24 separate recommendations for enhancing internal controls and improving program efficiency related to the LESO program. The DLA has implemented 22 of these recommendations that were within its scope.

Most recently, in July 2017, GAO released a report that described a sting operation it conducted in 2016. GAO investigators created a fictitious federal LEA, gained approval to use the LESO program, and obtained more than 100 controlled items worth close to $1.2 million. The DLA was notified in March 2017 and immediately suspended the federal LEA special program. As a result of the sting operation, GAO concluded that DLA's internal controls at the time were insufficient to prevent the approval of a fraudulent enrollment application for a federal LEA. The DLA has responded diligently to these reviews, and the evolution of the program reflects that.

Three Options for the Program's Future

Overall, and despite the recent GAO findings, the LESO program is largely being administered according to congressional intent. Program staff and officials are aware of their sensitive mission and the political and cultural issues surrounding it. However, the analysis leaves one question unanswered: How can LESO, DLA, and the U.S. government address the ongoing public concern about the potential effect that DoD excess property has on the militarization of local police forces? The researchers see three potential paths forward.

The LESO program is professionally managed, conscious of congressional intent, and popular with LEAs. DoD has a solid record of keeping track of controlled equipment, and the vast majority of transfers — measured in quantity — are of general office equipment, tools, personal protective equipment, and other noncontroversial material. However, maintaining the program as is does not address concerns about the militarization of police.

Currently, requisition priority is given to LEAs that provide specific justifications for border security, counternarcotics, and counterterrorism police activities — all of which put controlled equipment in front of the public. One modification would be to no longer give LEAs preference for drug, border, and terrorism missions. Another modification could be to require LEAs to purchase a piece of equipment from another source and use LESO to supplement what LEAs already have. This requirement would ensure that LEAs truly need a given item, have previously justified the acquisition internally through their own budget process, and have obtained permissions from their civilian leadership. However, fewer LEAs might participate because they cannot afford the initial purchase.

Shift Responsibility for Controlled Equipment to Another Agency

Under this approach, the DLA would still be responsible for disposing of the equipment in a timely manner, but the U.S. Department of Justice (DoJ) would handle requests from LEAs. DoJ is better positioned than DoD to evaluate the appropriateness and value of equipment to law enforcement and to assess the program's impact on policing through its existing evaluation programs and its relations with LEAs. DoJ management might also be more likely to develop standards for monitoring the equipment's use; link transfers to outcomes, such as improved crime rates or police use of force; and link equipment transfers to training.