The Indo-Pacific Contest: It Could be Time for Fresh Ideas on Allied Security Cooperation 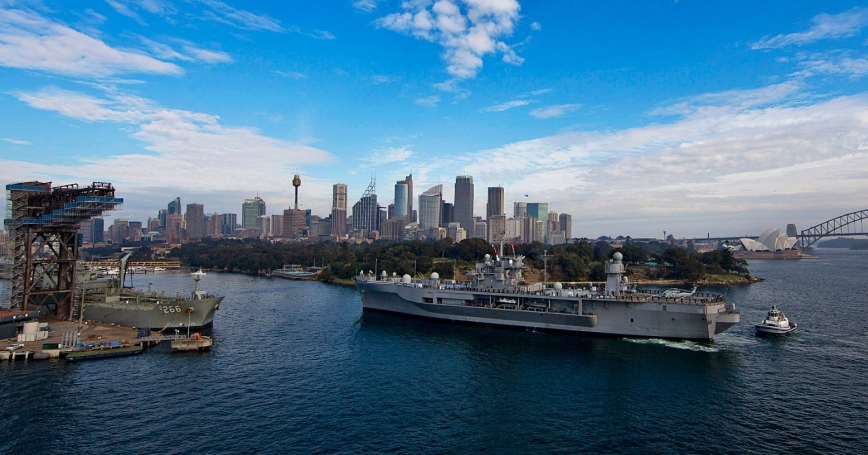 U.S. and Australian interests in the Pacific and Southeast Asia face unprecedented challenges from China, and Australia may not be able to handle them on its own. Without U.S. help, China's influence in the region will likely grow at both countries' expense. RAND's research points to China's unprecedented adaptation in its use of soft power while Australian National University research points to waning U.S. regional influence. Momentum is growing for heightened cooperation between Australia and the United States. The 2020 Australia–United States Ministerial Summit will need to address hard questions and identify innovative solutions as a matter of urgency.

China's activities have generated much concern across the region. Its adversarial stance in the South China Sea and on the Indian border is deeply worrying and its involvement with several small Pacific Island states, including possible military bases in places like Tulagi, Solomon Islands, is also disconcerting. Chinese entities have engaged in a forthright manner, with soft loans, apparently favorable security deals, and financial inducements, coupled with flashes of “wolf warrior” diplomacy and threats of a range of punitive measures. In short, China is outplaying and outsmarting the United States and Australia and time is running out to make the necessary changes.

China's assertiveness and an apparent U.S. ambivalence towards remaining engaged in Southeast Asia and the South Pacific multilaterally has driven Australian policymakers to develop a “Plan B” for foreign policy to reshape and provide additional resources for its defense policy, as well as to launch the Pacific Step Up program, which involves a multi-pronged re-engagement strategy for the Pacific. This approach takes account of the main needs of the region—that is, the overlap of looming environmental catastrophe, great power contestation, and related governance challenges that are transforming security cooperation practices in the Indo-Pacific, or what Pacific Islanders are now calling the Blue Pacific Continent.

Australia (and New Zealand) providers are well-placed to understand regional needs but, mindful of resource limitations, could achieve greater effects by working more closely with the United States. Yet what has been offered so far appears underwhelming, and largely uncoordinated. Anecdotal evidence abounds of Australians surprised upon arriving in remote Pacific Islands to find U.S. contingents there tasked with similar missions that would have benefitted from prior coordination and deconfliction.

Shared History a Pointer to the Future

Australia and the United States need to adapt their thinking and planning approaches in response to changed security dynamics, a fact emphasized by Australia's General Angus Campbell's War in 2025 address in 2019. The interests of the United States and Australia sometimes do not overlap, but for more than a century, there has been a significant correlation. Building on high levels of trust, shared experience and interests, the United States and Australia could recognize the overlapping environmental, governance, and contestational concerns to consider new and innovative ways to engage in combined security cooperation planning and execution.

The interests of the United States and Australia sometimes do not overlap, but for more than a century, there has been a significant correlation.

Australia already collaborates with the United States' Indo-Pacific Command (INDOPACOM) in contingency response planning, which includes deployments, exchanges ,and exercises, all of which are significant components of their posture aimed at bolstering deterrence to enhance regional stability and security.

Australia and the United States also have been principal first responders to a plethora of natural disasters, ranging from the Indian Ocean tsunami, to storms, to countering terrorism and piracy. Despite being slow on occasion, such actions have helped bolster trust and respect amongst neighbors, as well as an appreciation for the contribution that U.S. and Australian forces make. But what has worked in the past seems now to be of diminishing relevance.

Adapting to the Pandemic's Disruption

COVID-19 has brought many security cooperation activities to a halt (e.g., Australia's Indo Pacific Endeavour activity for 2020) or at least scaled back (e.g., Rim of the Pacific and possibly Talisman Sabre 21). Australia, along with New Zealand, has refocused its Defence Cooperation Program on the COVID-19 response and is working with partners to identify capability gaps.

The pandemic provides an opportunity to rethink how to engage each other and regional partner countries in a more coordinated way.

Military planners in INDOPACOM and Australia's Headquarters Joint Operations Command excel at short term crisis response planning, but long-term planning to support soft power initiatives is a challenge for both due to the uncertainty of partner relationships and limited resourcing. The concept of rigorously coordinated five-year security cooperation plans for INDOPACOM is a relatively new one.

Both countries could invest more in a whole-of-government, deliberate, and combined planning framework to enable longer-term projects in partner countries that can be sustained and that also work to counter China's influence. The confluence of interests should drive collaboration, building on trust and understanding developed over a “hundred years of mateship.”

Agility is a core feature of Australia's international engagement approach. Australian officials lament the difficulties in reaching inside the U.S. security cooperation enterprise to make things happen quickly. According to senior Australian Defence officials, in several instances coordination in the Southwest Pacific has not worked out (e.g., responding to requests for flat bottom landing craft and rigid hulled inflatable boats).

Overall, both countries should ensure that their security cooperation activities reflect their mutual strengths, schedules, and strategic priorities, as explained in Australia's American Alliance. Combined security cooperation planning should help so long as it prioritizes felt needs and is attuned to local mores. Planning should reflect the limited capacity in these countries to support large U.S. or Australian visiting teams. Sometimes less is more.

What Can Be Done Differently?

First, the United States and Australia should engage in out-of-the-box combined and deliberate planning practices, with pooled resourcing where possible and appropriate, rather than simply informing each other of planned activities. They should develop a combined security cooperation plan (as a pilot) with one or two countries, where Australian and U.S. resources work complementarily. INDOPACOM's multinational working group forum already seeks to coordinate and collaborate with Australia and Japan, so there is a structure to build upon. Papua New Guinea, East Timor, Solomon Island, or Fiji could be amenable to such fresh proposals, focusing on good governance and institutional capacity building.

The United States and Australia should engage in out-of-the-box combined and deliberate planning practices, with pooled resourcing where possible and appropriate.

Second, the United States should consider working more collaboratively with Australia to support the Pacific Step Up and, if endorsed, a grand compact for the Pacific—a burden-sharing proposal for micro states facing existential challenges that could be akin to the U.S. Pacific compact with the Federated States of Micronesia and New Zealand's with Cook Islands. The assumption here is that Australia would lead in the Southwest Pacific, working closely with New Zealand. The United States would provide enablers such as logistics, transportation, intelligence, surveillance, and engineering support to Australia on the ground activities.

Third, it may be time to launch combined, collaborative virtual initiatives in the region. This could include strategically focused seminars, lectures, table-top exercises, and crisis simulation activities addressing health, governance, and security concerns. Initiatives like the Pacific Humanitarian Pathway, involving health support in collaboration with Pacific Island Forum member states, is one such initiative aimed at addressing needs. The Australia Pacific Security College, and various university bodies and think tanks including the Australian Civil Military Centre already engage regional counterparts. Stronger links should be made with organizations such as the United States Department of Defense's Institute for Security Governance and the Daniel K. Inouye Asia-Pacific Center for Security Studies in Hawaii. Their models are different, but they could work in a complementary way with enough shared vision and concern.

Fourth, U.S. and Australian security cooperation planners should consider sending combined advisory teams to these partner countries. These could focus on governance procedures and policies including institutional capacity building and mentorship in such areas as strategy, policy, logistics (maintenance/sustainment), human resource management, cyber policy, and defense resource reform, building on the momentum of the U.S. Department of Defense and Australian Defence, which to this point have pursued mainly separate initiatives.

U.S. and Australian planners should double-down on capacity-building training and exercises.

Fifth, U.S. and Australian planners should double-down on capacity-building training and exercises under Pacific Pathways and Indo-Pacific Endeavour constructs, virtually if need be, mindful of the needs arising from the pandemic's disruption. The expertise of third-party partners from New Zealand, Singapore, Malaysia, Indonesia, India, Republic of Korea, or Japan (and others with a stake in the Indo-Pacific such as France, Canada and the United Kingdom) could help too. Ways to capitalize on NATO's renewed interest in the neighborhood could be explored as well. Such initiatives require strong assessment, monitoring, and evaluation practices to account for best practices and lessons, with specific, measurable, achievable, results-oriented and time-bound or “SMART” objectives.

Sixth, with INDOPACOM and Headquarters Joint Operations Command as lead planners, they should engage in deliberate, combined planning practices and streamline points of contact to foster better responsiveness and a deeper appreciation of what each other can offer. That could capitalize on collective strengths and respond to emerging regional needs.

These adjustments should be considered in the upcoming Australia–United States Ministerial Summit as they may help to address pressing environmental, governance, and contestational concerns, bolster security and stability, and deter escalatory Chinese wolf warrior behavior.

John Blaxland is professor of international security and intelligence studies at the Australian National University. His latest book is “In from the Cold: Reflections on Australia's Korean War” (ANU Press, 2020). His forthcoming book, “Niche Wars: Australia in Afghanistan and Iraq, 2001–2014,” is due out late this year with ANU Press. Jennifer D.P. Moroney is a senior political scientist at the nonprofit, nonpartisan RAND Corporation with 20 years of experience researching and writing on U.S. and allied security cooperation, coalition operational lessons, and Eurasian security. She currently serves on the Defense Science Board summer 2020 study program as a subject matter expert on security cooperation. From 2014 to 2018, Moroney served as the inaugural director of RAND Australia in Canberra.

This commentary originally appeared on Pacific Forum on July 8, 2020. Commentary gives RAND researchers a platform to convey insights based on their professional expertise and often on their peer-reviewed research and analysis.