Is COVID-19 a National Security Emergency? 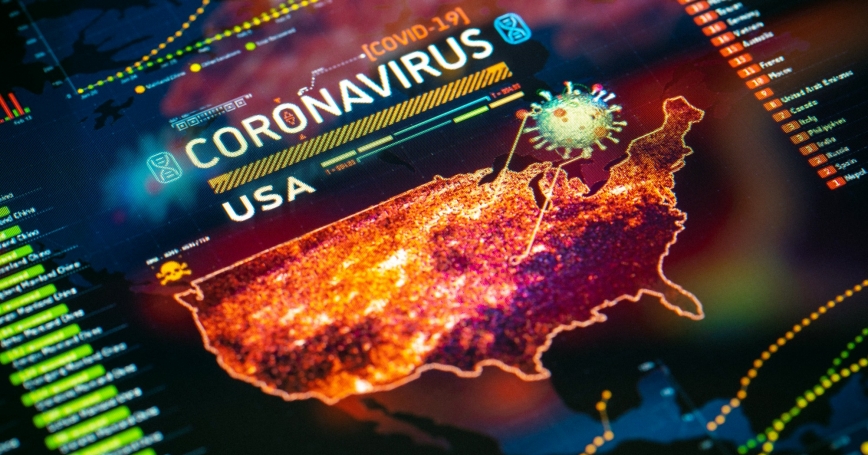 COVID-19 is the greatest threat to the United States to materialize in over a century. To put it into perspective, World War II, which many consider to have been an existential threat, claimed an average of 9,000 American lives per month. The novel coronavirus has, so far, claimed 30,000 American lives per month. And, based on epidemiological models, it is projected that roughly 225,000 Americans will lose their lives to COVID-19 by the end of October—an 8-month death toll that is more than double the total number of Americans killed in all wars since World War II.

Despite reports of Americans treating coronavirus in a nonchalant manner—congregating in large crowds, refusing to wear masks, and in some instances coughing and spitting on people that request they practice social distancing—the risk to human life is not lost on the majority of Americans. For the first time since the immediate aftermath of the 9/11 attacks, horror, fear, and anxiety have begun to overwhelm the public.

In just the past month, Gallup found that the number of Americans who feel that the pandemic is getting “a lot worse” has increased five-fold. Nearly 7-in-10 people now believe that conditions will continue to deteriorate. Similarly, a survey of parents found that 71% are worried about sending their children back to school in the fall because of the risks involved.

With new cases on the rise in 41 states, Americans fear for their safety. And when the safety of the nation is endangered, the situation becomes a matter of national security and it should be treated as such. While there is a National Health Security Strategy that stresses the link between health and security, the United States is currently not executing this strategy.

When the safety of the nation is endangered, the situation becomes a matter of national security and it should be treated as such.

When faced with grave threats to the security of the United States in the past, the nation's political leaders responded with bold and forceful measures. It may be time to do the same with the coronavirus pandemic. This could entail adopting three broad actions that proved successful during past crises.

First, a national strategy could be devised to mobilize the country into action. As implied by the phrase “national strategy,” for such a plan to be effective in reducing the spread of COVID-19, it could be designed to apply to the entire country as a whole. That is, all 50 states, which is no easy feat in the U.S. system of federalism where each state has limited autonomy.

Moreover, as with past national security strategies, the plan to combat coronavirus could offer clear priorities, measurable benchmarks, and tools to assist those on the frontlines. Chief among the objectives could be a flattening of the COVID-19 curve in all 50 states that holds for at least a 4-week period, across all key metrics. Fully reopening the economy and schools could become the focus once the coronavirus is under control.

Second, identifying the appropriate means for achieving national ends may require heeding the advice of experts, like the chemists, physicists, and engineers who were the key experts who developed atomic bombs that were used to end World War II. During the Cold War, political scientists and economists provided guidance on deterrence and containment. In the post-9/11 era, specialists in violent extremism and radicalization were called upon to counter terrorism.

Third, the president who will successfully lead America to safe harbor could benefit from their own Kennedy moment, where they implore Americans to ask themselves what they can do for their country. To resist the Axis powers in World War II, healthy men enlisted in the military while women filled workplace vacancies in an effort to keep the economy afloat. Professional sports were cancelled and Hollywood shifted from entertainment to infotainment—all with little complaint.

Developing an effective national response to COVID-19 could begin with elevating the pandemic from a public health emergency to a national security crisis.

It's hard to believe that people who had no problem standing in airport security lines for upwards of an hour, partially undressing on command, will refuse to wear a 2 oz. mask and keep 6 ft. of distance while in public. Yet, there have been countless stories of this happening. A unified front that includes the president and all 50 governors could mobilize Americans into action—backed up by the threat of shame and sanction for those who wish to put selfish interest before national interest.

Developing an effective national response to COVID-19 could begin with elevating the pandemic from a public health emergency to a national security crisis. The novel coronavirus may not be a threat that the military can defeat, but that doesn't mean America shouldn't set it in its sights and go on the offensive against it.

Louis Klarevas is research professor at Teachers College, Columbia University, and the author of Rampage Nation: Securing America from Mass Shootings. Colin P. Clarke is an adjunct political scientist at the nonprofit, nonpartisan RAND Corporation and an assistant teaching professor at Carnegie Mellon University's Institute for Politics and Strategy.

A version of this commentary originally appeared on justsecurity.org on August 6, 2020.