L.A. Has the Nation's Highest Unemployment. For Some Groups, It's Even Worse Than That. 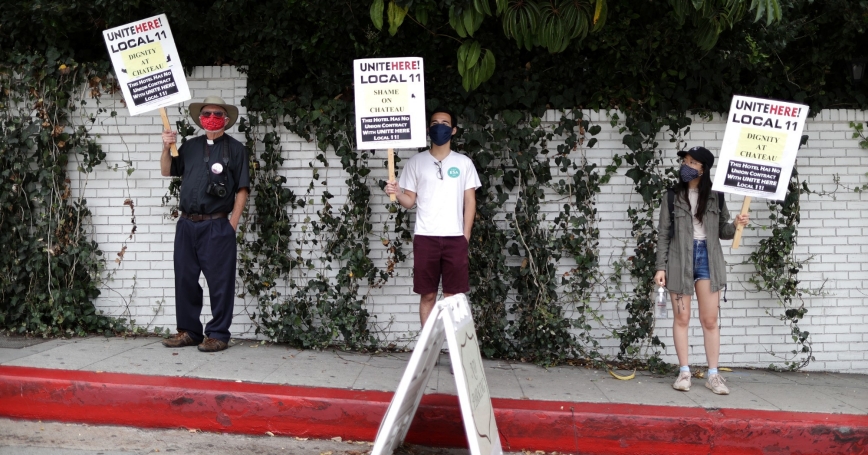 People socially distance as they protest in support of laid-off hotel workers without health care amid the COVID-19 pandemic, in Los Angeles, California, July 23, 2020

These shockingly high average unemployment rates only tell part of the story, however. For the poor and some racial and ethnic groups, the jobs picture is far worse.

The Los Angeles region has among the worst income inequality in the nation, and that divide is mirrored in the pandemic's effect on employment. Before the pandemic-related shutdowns, the average unemployment rate was 6.6% for lower-income families and 2.1% for higher income families. Although this is a substantial difference, both levels were fairly low.

Since the pandemic hit, however, the rates for both groups increased almost fivefold, profoundly magnifying that gap. From April through June, the unemployment rate for workers in households earning above $100,000 was only 11%. For those in lower-income families, it has hovered around 28%.

The Los Angeles region has among the worst income inequality in the nation, and that divide is mirrored in the pandemic's effect on employment.

Unemployment for L.A.-area Asian residents increased rapidly as the pandemic took hold and it has remained high. One reason is many Asian workers in the region work in service industries. Current Population Survey data show that personal and home care aides, waiters and waitresses, miscellaneous personal appearance workers, and cashiers are among the top 10 occupations for this group.

Bad as they are, these figures might significantly understate the true scale of L.A.-area unemployment. Informal jobs—like many in the garment industry, agriculture, and construction—represent an estimated 15% of total employment (PDF) in Los Angeles County. But changes to these jobs, which aren't taxed or registered in government data, aren't accurately tracked or measured.

Informal workers are often non-citizens, so looking at joblessness among that group gives us a picture of how badly damaged this informal sector is. From April through June, the region's 2.5 million non-citizens had an average unemployment rate near 20.5% compared with 16% for U.S. citizens. (Notably, immigrants without legal status, who disproportionately hold informal jobs, are ineligible for traditional unemployment insurance, explaining why the state's program to provide $500–$1,000 in disaster relief for up to 150,000 was quickly overwhelmed with applications.)

For low-income workers who are getting unemployment payments, the expiration of the federal $600 per week add-on is likely to be a profound loss. A proposal in the Senate would drop this supplement to $200 per week, which proponents say will encourage people to return to work.

At first glance, regional employers in construction and hospitality, which rebounded most strongly in June, might welcome an influx of workers seeking jobs. But a June–July spike in COVID-19 infections in Southern California led to renewed business closures, so those job gains may have evaporated. At the same time, the $600 benefit directly contributed to economic demand. Cutting it could also harm job growth.

Some California lawmakers have floated the idea of borrowing from a federal trust fund to extend the $600 payments in the state. But progress has been delayed by uncertainty about what aid, if any, might emerge from Congress or the White House. The only near-term certainty appears to be that effectively containing the spread of COVID-19, which is essential for economic recovery to take hold, remains out of our grasp.

Jason Ward is an associate economist at the nonprofit, nonpartisan RAND Corporation who studies labor market participation, education, health, and links between them.