Secretary Azar's Taiwan Visit Should Be Celebrated—for the Right Reasons 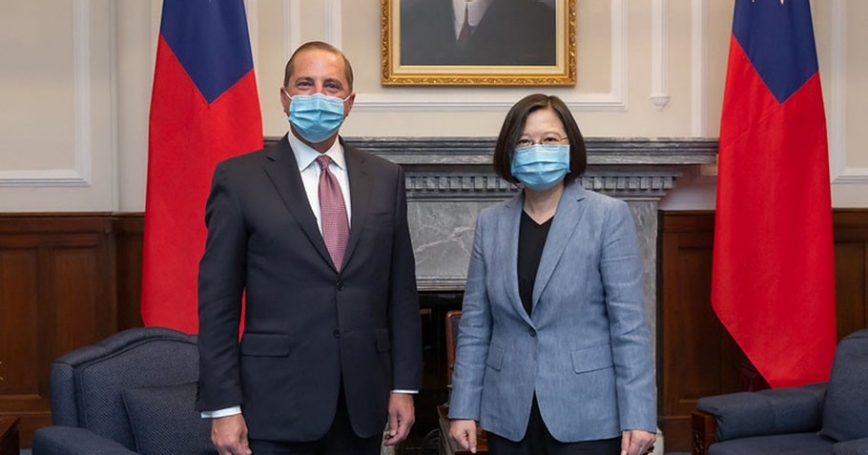 On August 9, U.S. Health and Human Services Secretary Alex Azar made a historic visit to Taiwan. Azar became the highest-ranking American cabinet official to travel to the island since 1979, which was when the United States dropped official diplomatic recognition of Taiwan in favor of communist China.

Indeed, Azar's visit should be celebrated by Taipei and Washington as it presents the latest evidence that bilateral relations are significantly strengthening—in this case, to better understand and handle the coronavirus pandemic.

However, Taiwan should also view the United States' moves to bolster bilateral ties with some measure of trepidation. Simply put, the United States' objectives in taking such unprecedented steps with Taiwan over the past few years remain unclear.

On the one hand, Taiwan and the United States are natural partners. Both are vibrant democracies with numerous overlapping political, economic, and security interests. From this perspective, it makes sense to enhance U.S.-Taiwan relations and to integrate Taiwan into the U.S. Indo-Pacific strategy (PDF) with “like-minded” nations.

On the other hand, Washington is embroiled in an increasingly ferocious great-power competition with Beijing, raising concerns that the United States may actually be strengthening ties with Taiwan primarily to frustrate and thwart China.

If the United States were to make increasingly provocative moves, such as one day sending the secretary of state or defense chief, forging a formal military alliance with Taiwan, or even unilaterally recognizing Taiwan as an independent nation, then this could lead to armed conflict between the United States and China over Taiwan—certainly an undesirable outcome for Taipei.

Indeed, Azar's visit prompted Beijing to dispatch fighter jets across the center line of the Taiwan Strait. In another very worrisome scenario, Washington might eventually use Taipei as a pawn to achieve victory in other areas of the U.S.-China relationship.

The U.S. probably wants to both strengthen its ties with Taiwan and dangle Taiwan in front of China, but Washington's prioritization of its goals is of utmost importance to Taipei.

Of course, the United States probably wants to both strengthen its ties with Taiwan and dangle Taiwan in front of China, but Washington's prioritization of its goals is of utmost importance to Taipei. If the former is paramount, then Taiwan should continue to deepen ties with its most valuable partner without worrying about the U.S.-China great-power competition or potentially being used as a pawn.

But if the latter is Washington's top objective, then Taipei should feel serious consternation, and perhaps even consider distancing itself from the Americans to avoid an undesirable outcome.

The problem for Taipei is that there is some evidence to suggest both possibilities.

Since the start of Donald Trump's administration in 2017, the U.S. Congress has passed numerous pro-Taiwan bills that have been signed into law by Trump.

To be sure, all of these pieces of legislation—the Taiwan Travel Act, the Taiwan Allies International Protection and Enhancement Initiative (Taipei) Act, the Asia Reassurance Initiative Act, the National Defense Authorization Act (PDF), or others enacted or pending—authorize specific U.S. actions and call for oversight to help Taiwan maintain its sovereignty in the face of rising Chinese pressure.

The Trump administration has further strengthened relations with Taipei in myriad ways, such as authorizing robust arms sales packages and hosting high-level Taiwanese leaders in the United States. Taipei should welcome these positive steps.

But Congress is also passing pro-Taiwan legislation in an environment of intense anti-China sentiment and competition with China—perhaps the most intense ever seen in U.S. history—that has only worsened due to bickering over the coronavirus pandemic.

Furthermore, Trump is a self-proclaimed deal maker. His tough treatment of allies—for example, demanding that South Korea and Japan pay more for U.S. protection—probably makes Taiwan, at a minimum, anxious about the future.

In the lead-up to U.S.-China trade talks in early 2018, Trump was angered to learn that a senior State Department official had visited Taiwan and met President Tsai Ing-wen, a move he thought could potentially jeopardize the negotiations.

The implication was that interactions with Taiwan were expendable in the context of a U.S.-China trade deal. Similarly, Trump remained relatively quiet in 2019 as China moved to bring Hong Kong protests under control, suggesting that expecting a values-based U.S. approach to Taiwan—democracy over authoritarianism—might be misguided as well.

Separately, Trump has reportedly likened Taiwan to the tip of his Sharpie pen and China to the Resolute Desk in the Oval Office—underscoring his view that China was far larger and thus more important than Taiwan.

Going forward, Taiwan should welcome strengthened ties with the United States, but also recognize that intensifying U.S.-China competition holds risks for the island. Additionally, Trump's penchant for deal making should be a factor in whether Taipei feels comfortable with the possibility that U.S.-Taiwan relations might be compromised or sacrificed in some way for a future deal with China. Unfortunately, there is precedent for this as well.

Derek Grossman is a senior defense analyst at the non-profit, non-partisan RAND Corporation and an adjunct professor at the University of Southern California. He formerly served as the daily intelligence briefer to the assistant secretary of defense for Asian and Pacific security affairs at the Pentagon.

This commentary originally appeared on South China Morning Post on August 21, 2020. Commentary gives RAND researchers a platform to convey insights based on their professional expertise and often on their peer-reviewed research and analysis.