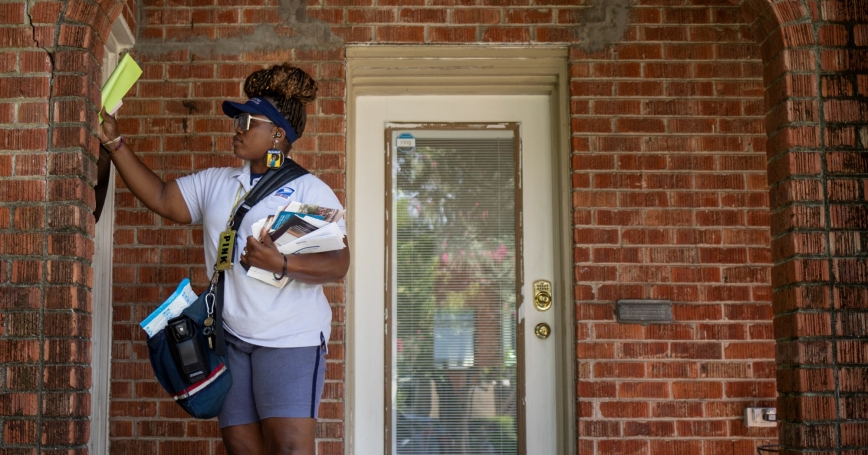 The United States Postal Service Is More 'Essential' Than You Thought

Concerns that changes to the United States Postal Service (USPS) may negatively affect mail delivery and interfere with mail-in voting are rampant. Although the Postmaster General recently announced proposed cuts will be halted until after the November election, some of the changes, such as the removal of postal boxes and mail-sorting machines, have already been implemented.

Meanwhile, a broader fight ensues over a $25 billion Postal Service funding increase. To be sure, observers have come to the defense of the USPS by highlighting its lifeline delivery functions, that it is the third-largest employer in America (including hiring nearly 100,000 veterans), and that it has long enjoyed the most favorable public opinion of any federal agency. But what is not being discussed is the even more essential role the Postal Service plays in the country.

Unlike other private delivery services, the USPS is bound by its universal service obligation—a collection of requirements to ensure that all users have access to mail service at a reasonable price. As such, the USPS is tasked with delivering mail to all locations everywhere in America—urban and rural—as well as to protectorates like Puerto Rico and overseas military and diplomats.

In practice, it is not profitable for private couriers such as FedEx or UPS to deliver to many rural and other areas. Given this, the USPS often makes “last-mile deliveries” on behalf of those private companies, because the Postal Service has the existing infrastructure in these locations while the private companies do not.

The existing infrastructure that allows the USPS to perform its critical functions—logistics networks, warehouses, sorting machines, vehicle fleets, and postal carriers—is another important element of its “essentialness.” The USPS is an invaluable public good.

Once COVID-19 no longer threatens the country, the Postal Service will continue to be an essential service that delivers mail to every address in the country and connects rural communities.

The National Response Framework (NRF)—which specifies how the nation responds to all types of disasters and emergencies—recognizes the value of that unique public good. The USPS is identified as a support agency for eight of the 15 Emergency Support Functions (ESFs) in the NRF, where its capacity for transportation, logistics, information dissemination, public safety and security, and many others, are expected to help the nation respond to crises.

For example, the USPS is tasked with assisting in the distribution and transportation of medicine, pharmaceuticals, and medical information to the general public affected by a major disaster or emergency. In 2017, following Hurricane Maria, letter carriers in Puerto Rico provided information to FEMA on vulnerable citizens who needed medical care.

Even though the USPS serves all these essential functions that private businesses do not, it is mistakenly thought of as a private business that should be able to turn a profit (something it has not done since 2006).

The USPS is unique in that it is a federal agency that does not receive tax dollars for its operating expenses, relying instead on the sale of postage, products, and services to fund its operations. And the Postal Service's ability to raise prices to increase revenue or expand its commercial services is severely restricted by the Postal Accountability and Enhancement Act of 2006, which also placed a $72 billion burden for future retiree health care costs on the USPS. No other federal agency or private corporation has this requirement.

After the November election, and once COVID-19 no longer threatens the country, the Postal Service will continue to be what it is now—an essential service that delivers mail to every address in the country and connects rural communities. The USPS is also essential in contributing to public safety. It is a uniquely funded government agency, not a business—one that is vital for our nation and should be funded accordingly.

Michael Pollard is a senior sociologist and Lois Davis is a senior policy researcher at the nonprofit, nonpartisan RAND Corporation. Both are professors at the Pardee RAND Graduate School.

This commentary originally appeared on The Hill on August 25, 2020. Commentary gives RAND researchers a platform to convey insights based on their professional expertise and often on their peer-reviewed research and analysis.