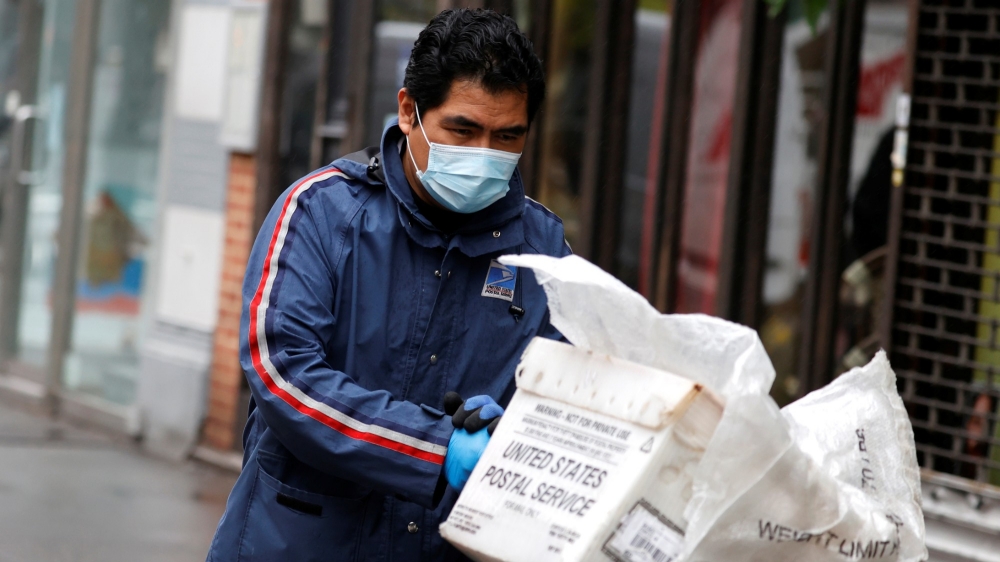 A U.S. Postal Service worker delivers mail in the rain on Manhattan's Upper West Side, April 13, 2020

The coronavirus disease 2019 (COVID-19) pandemic has claimed many victims and is threatening to claim another one—the United States Postal Service (USPS). In May 2020, a statement from the USPS said that the its main source of revenue—letter-mail volume—had dropped dramatically as businesses cut back on sending advertisements and bulk mail and that it will exhaust its cash on hand by the end of September.[1] Unlike other federal agencies, the USPS does not receive tax dollars for its operating expenses; instead, it relies on postage and product sales and services. Given these dire circumstances, the U.S. House of Representatives passed a $3 trillion coronavirus relief package on May 15 that included relief funds for the USPS, although the Senate is unlikely to consider the bill.[2] However, this is not the first time the USPS has needed federal relief, and this request is being debated in Congress in light of whether we need the USPS at all, given the other private delivery services that are now available.

As part of a nationally representative RAND American Life Panel (ALP) survey about how Americans are coping with the COVID-19 pandemic, which was fielded from May 1 to May 6, 2020, we asked more than 2,000 individuals about their perceptions of the USPS; their concerns about handling mail and packages during the COVID-19 pandemic; and how they felt USPS compared with private courier companies, such as FedEx and United Parcel Service (UPS).[3]

Overall, this survey found that the public places a very high level of trust in the USPS as an agency; it ranks just below the Centers for Disease Control and Prevention (CDC) but significantly above the Federal Emergency Management Agency (FEMA), the Central Intelligence Agency (CIA), and the U.S. Congress (see Figure 1). These results are consistent with a long history of surveys indicating that the public holds a highly favorable view of the USPS.[4] Furthermore, our survey found that trust in the USPS is significantly higher in rural communities than in urban communities.

Respondents also were asked to compare the USPS with such private courier services as FedEx and UPS on the COVID-19–related safety measures each uses. Roughly half of the respondents indicated that they believed that the handling procedures for USPS and couriers "were about the same," while one-third indicated that they did not know. Among the minority who did express a belief that one had safer procedures than the other, rural residents reported that they felt that the USPS was safer 75 percent more frequently than they did for private couriers; among rural residents with a preference, 64 percent believed that the USPS was safer, while 36 percent believed that couriers were safer.

Such results are not surprising. They echo findings from a 2008 RAND study that showed that 89 percent of Americans felt that the USPS was more reliable than private couriers; more than half of that study's respondents preferred having only the USPS access their mailbox (compared with allowing private couriers or other companies access as well). Forty percent of respondents felt that allowing couriers to deliver to their mailbox would make their mail less safe, and 77 percent reported that increasing the sorting, processing, and transportation of mail by private companies would increase their concern about security breaches and crime.[5]

One contributor to the USPS's enduring value is that it is the only mail and package delivery system that has a universal obligation to provide service to every delivery point in the United States, regardless of whether it is profitable.

Furthermore, the USPS plays an important role in "last-mile deliveries," in which private couriers contract with the USPS to deliver packages or items to a location beyond the courier's delivery network where it is more cost-effective to use the USPS delivery network. The 2008 RAND study concluded from an analysis of last-mile deliveries that the USPS's safety and security screening likely was better than that of the originating private companies.[6]

Although large companies, such as Amazon, have increasingly developed their own delivery networks, as recently as July 2019, the USPS delivered about one-third of Amazon packages.[7] Amazon also noted that the USPS would be a major part of facilitating one-day delivery in rural areas.[8]

As the research shows, the USPS plays a more central role in smaller and rural communities, where it often serves as an information hub, not just a postal center. For example, a recent survey by NORC at the University of Chicago found that rural customers had more-frequent social interactions at post offices.[9] For much of rural America, the USPS is the only delivery option.[10] In 2017, the USPS delivered mail across 229,000 routes, of which about 75,000 (33 percent) were rural routes. Among its 157 million total delivery points in 2017, 43 million (27 percent) of the residential delivery points were services on rural carrier routes, in addition to the 1.6 million (1 percent) that were rural route business delivery points.[11]

As Congress and the White House debate about how to assist the USPS, these new findings—bolstered by our past research⁠—should help policymakers understand the unique role the USPS plays, especially in the age of COVID-19.

This report describes a subset of results from a May 2020 survey fielded through the ALP to assess the wide-ranging effects of the COVID-19 pandemic on individuals and households. A technical description of the survey, which includes details about the ALP, the objectives of the survey, and information about the fielding of the survey, are presented in Katherine Grace Carman and Shanthi Nataraj, 2020 American Life Panel Survey on Impacts of COVID-19: Technical Documentation, Santa Monica, Calif.: RAND Corporation, RR-A308-1, 2020.

Funding for this research was provided by gifts from RAND supporters and income from operations. The research was conducted by RAND Education and Labor, a division of the RAND Corporation that conducts research on early childhood through postsecondary education programs, workforce development, and programs and policies affecting workers, entrepreneurship, and financial literacy and decisionmaking. Questions about this report should be directed to Michael Pollard at mpollard@rand.org, and questions about RAND Education and Labor should be directed to educationandlabor@rand.org.