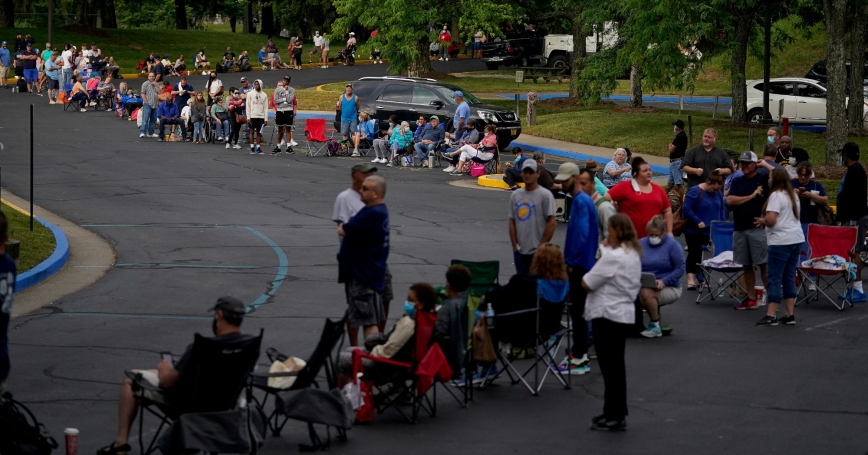 People line up outside Kentucky Career Center prior to its opening to find assistance with their unemployment claims in Frankfort, Kentucky, June 18, 2020

As the broadest COVID-19 shutdowns were underway this spring, a historic number of American workers entered temporary layoff—16.8 million just in April. In a typical month, temporary layoffs represent no more than 15 percent of the unemployed. In April, it was 57 percent.

Those temporary layoffs represent an economy put on pause. What's happened to them since then tells us if it can hit “play” again.

Temporary layoff is a distinct class within government unemployment statistics. If surveyed workers indicate that they will be recalled to their job within six months, they are counted as on temporary layoff—as opposed to permanent layoff. It's the difference between someone waiting for their job to come back versus someone looking for a new job.

Figure 1 shows the number of temporary layoff, permanent layoff, and new entrants among the unemployed since January. Because of survey issues during the pandemic, some workers have been mistakenly categorized as employed but not at work for other reasons; here we include those in the count of temporary layoff.

These segments—temporary and permanent—also reflect two overlapping pandemic-related forces at work. First, the government consciously shut down businesses and sent workers home to contain the virus (the direct effect). At the same time, consumer demand has fallen (the indirect effect). A restaurant, for example, may be closed because it's not an essential business, a direct effect. But a bed-and-breakfast, whether it's allowed to open or not, might not have enough guests to stay afloat, an indirect effect.

In a normal recession, we look to the monthly unemployment rate and the number of new jobs as the barometers of national economic health. But the problem with both of these measurements is that they show the net effect of these direct and indirect effects.

To set useful public policy, we should consider measuring the individual size of each effect. How many jobs are going to come back versus how many are gone for good?

So, back in April, 16.8 million workers said they were waiting for their jobs to come back. What happened to them? As we show in Figure 2, it's not a single story.

Or, among workers who thought in the spring that their joblessness was temporary: By summer, about a third got called back (or found a new job); about a quarter no longer thought they had a job to return to; and the rest—an astounding 7.6 million workers—were still in limbo.

Twenty percent of permanent layoffs in May and June had been temporary layoffs the month before.

Another upshot of this: 20 percent of permanent layoffs in May and June had been temporary layoffs the month before.

This is telling, because it might indicate how much of the controlled shutdown has become an uncontrolled recession.

Analyzing such transitions within unemployment is crucial to understanding what's happening in the labor market right now—and highly relevant for policymakers. The $600 federal supplement to weekly unemployment benefits that ended two weeks ago, for example, served two possible functions. It could have helped people get by until their employers reopened. Or, it could have been directing money to those most likely to spend it and therefore propping up demand in the economy so that more businesses wouldn't permanently close.

Ordinarily, economists would look at prior recessions to benchmark where the economy is in its recovery and compare jobs numbers and unemployment rates over time. But the United States has never had such a large number of temporary layoffs among the unemployed before. Tracking monthly flows from temporary to permanent layoff is one way to gauge the current situation. It might not tell us everything we need to know, but giving up on returning to a prior job or finding a new one—especially when a job used to be waiting for you—is a sign of protracted labor market decline.