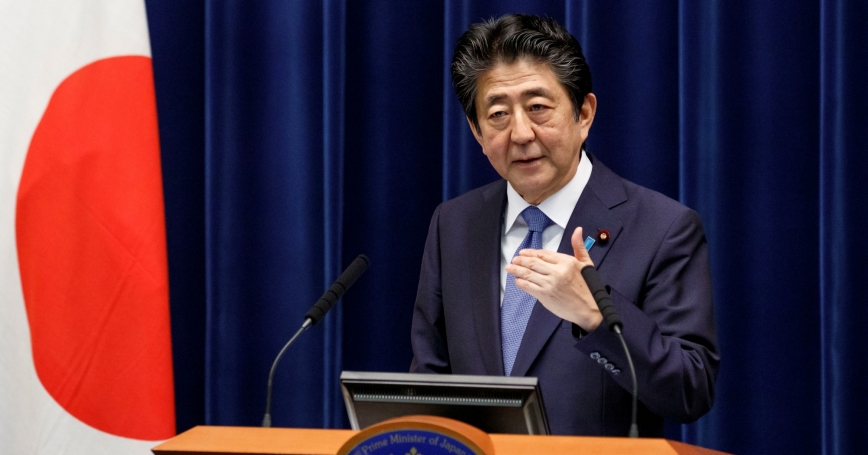 Under Prime Minister Shinzo Abe's leadership, Japan tightened its alliance with the United States and took on a more proactive role in the Indo-Pacific region and around the world. These developments were in many ways attributable to Abe himself and the strategic influence he was able to cultivate. His resignation, announced last month for health reasons, could very well leave Japan less secure and the U.S.-Japan alliance unstable.

Despite a recent fall in his approval ratings, Abe provided steady leadership and enjoyed strong political support in Japan for most of his nearly eight years in office. His successor, expected to be named by the ruling Liberal Democratic Party this month, is likely to have limited political capital and may simply play a caretaker role until the party elects a new president next year. Potential replacements include Chief Cabinet Secretary Yoshihide Suga, former Foreign Minister Fumio Kishida, Defense Minister Taro Kono, Foreign Minister Toshimitsu Motegi, and former Defense Minister Shigeru Ishiba. (Suga appears to be the favorite.) Whoever succeeds Abe, one thing is clear: With Japan reeling from COVID-19 and a sputtering economy that is officially in recession, the next leader will almost certainly have to devote more attention to domestic politics—and less to national security issues and the U.S.-Japan alliance.

It is hard to imagine that Abe's successor will have as substantial a security agenda or the ability to execute such ambitious reforms.

Abe pushed through a series of significant security reforms. His cabinet successfully reinterpreted the country's pacifist constitution to enable Japan to exercise its right to collective self-defense, updated defense cooperation guidelines and arms-export controls, drafted Japan's first national security strategy, and established a national security secretariat. These changes strengthened Japan and fortified the alliance. It is hard to imagine that Abe's successor will have as substantial a security agenda or the ability to execute such ambitious reforms.

During Abe's tenure, Japan became increasingly more engaged on the world stage. Abe led the Indo-Pacific region in forming a sweeping free-trade agreement, the Comprehensive and Progressive Agreement for Trans-Pacific Partnership, originally conceived by the United States as the Trans-Pacific Partnership but later abandoned by Trump. Abe's concept of a “free and open Indo-Pacific” region was adopted by the United States. And his outreach to Australia and India helped to revive the Quad, a strategic grouping of the United States, India, Australia, and Japan. Similar outreach to Europe and Southeast Asia strengthened relationships with other critical partners. Abe's successor may struggle to match these strategic successes.

Abe was a fervent supporter of the U.S.-Japan alliance, despite President Trump's frequent criticism of Japan. Abe was masterful in reaching out to Trump early and often. Because of his deft diplomacy, Abe was the only Group of 7 leader to enjoy a consistently positive relationship with Trump. It is unrealistic to expect that Abe's successor will establish the same kind of personal rapport with Trump. Japan's next prime minister may not even be as patient with the United States, particularly if Trump continues to criticize Japan.

Unfortunately, Japan's leadership transition comes at a critical time for the alliance. The two allies are about to engage in a potentially nasty—and, some would argue, unnecessary—fight over host-nation support, an important component of Japanese financial support for American military forces stationed in Japan. Given Abe's personal involvement in the alliance, Japan has had the luxury of knowing he could step in and manage these issues directly with Trump if needed. Without Abe, there is a real risk that the talks could devolve into fractious disputes.

The U.S.-Japan alliance is critical for regional stability. China's rise and increasingly aggressive behavior present a generational challenge for Japanese and American leaders.

The U.S.-Japan alliance is critical for regional stability. China's rise and increasingly aggressive behavior present a generational challenge for Japanese and American leaders. With rapidly shifting regional dynamics, it may be incumbent upon leaders in both Tokyo and Washington to deepen and expand the alliance. But rather than devote their full efforts to external challenges, the new leadership in Tokyo—and possibly in Washington after the November election—could end up in a defensive struggle to protect the alliance from critics inside their own countries.

It would not be the first time that the U.S.-Japan alliance was criticized from within. For much of the early post–Cold War period, it was unclear that the alliance would even survive, much less thrive. American observers often complained about the lack of steady and predictable leadership in Tokyo. Under Abe, Japan grounded the alliance, even as American politics and foreign policy vacillated. America's alliance with Japan is more important than ever. But without Abe, leaders in both countries may soon look back at the last eight years with envy.

Zack Cooper is a research fellow at the American Enterprise Institute. Jeffrey W. Hornung is a political scientist at the nonprofit, nonpartisan RAND Corporation.

This commentary originally appeared on Los Angeles Times on September 8, 2020. Commentary gives RAND researchers a platform to convey insights based on their professional expertise and often on their peer-reviewed research and analysis.