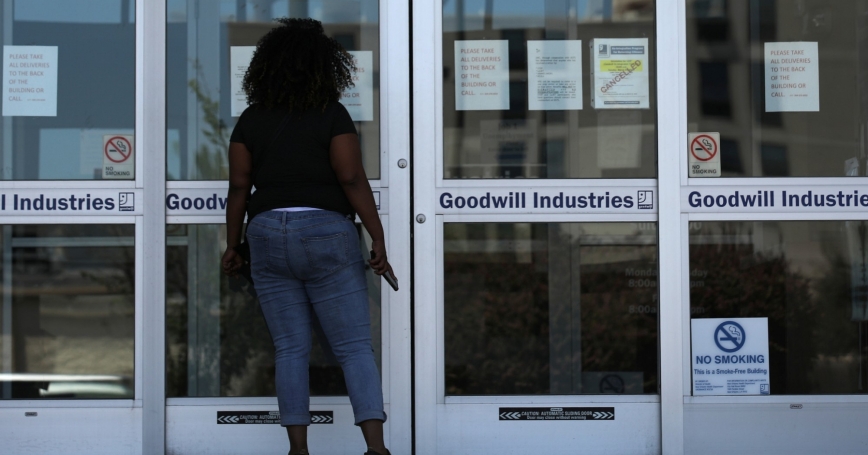 A woman looks for information at the New Orleans Office of Workforce Development in New Orleans, Louisiana, April 13, 2020

This COVID-19 recession/recovery is akin to a schoolyard game of kickball. As the economy tries to rebound, companies are adding workers to their team, yet a group is being picked last—Black workers.

It took more than 10 years for Black workers' incomes to return to their pre-recession levels.

While some may point to differences in education, age, and experience to explain these differences, these factors do little to explain racial disparities in employment. In fact, at every education level, Black workers have higher unemployment rates compared to their white counterparts. For example, Black workers with college degrees have unemployment rates similar to that of white workers with high school diplomas.

At every education level, Black workers have higher unemployment rates compared to their white counterparts.

Figure 1 details what happened. While a similar rate of Black and white workers were permanently laid off, a higher percentage of white workers remained employed.

Analyzing what happened with workers on temporary layoff—those who thought they would be called back to work within six months—also shows racial disparities. Figure 3 shows that as the pandemic continued, a higher percentage of white workers were called back to work each month compared to Black workers. Examining individuals who downgraded to permanent layoff shows a similar story: As the pandemic dragged on, a higher percentage of Black workers reported being permanently laid off than did white workers.

These figures echo two patterns that have affected Black workers in past recessions. And if those are any guide, getting back into a job later rather than sooner could do lasting harm to millions of Black Americans' incomes and wealth accumulation for years to come.

Jhacova Williams is an associate economist at the nonprofit, nonpartisan RAND Corporation. She is an applied microeconomist focusing primarily on economic history and cultural economics.