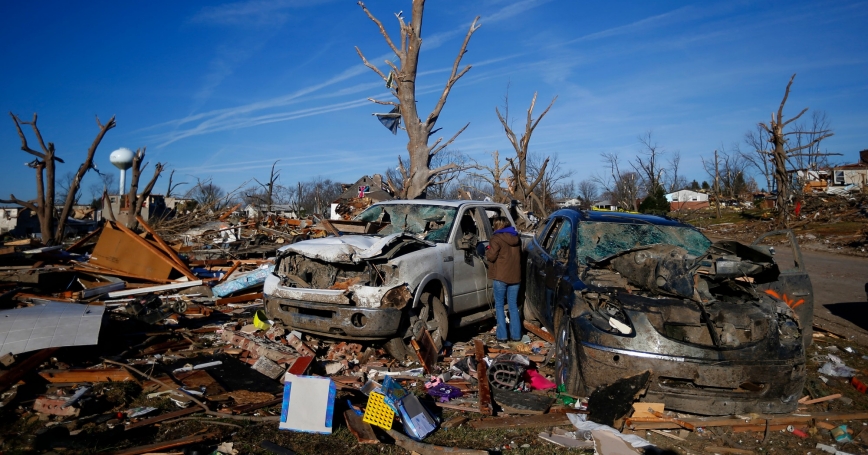 Two cars after they were destroyed by a tornado in Washington, Illinois, November 19, 2013

In the United States, federal, state, and local government share responsibility for paying for losses from disasters. Traditionally a state and local function, more responsibility has shifted to the federal government over time, and federal programs providing support to state and local entities for disaster response and recovery have proliferated. But as the frequency and severity of disasters has increased, so have the losses, and it is worth considering whether the current risk-sharing approach is appropriate.

To better understand the current situation, RAND undertook an analysis of the extent to which state and local governments rely on FEMA's Public Assistance (PA) program to repair buildings, contents, vehicles, and equipment that are damaged in presidentially declared disasters. With some exceptions, the PA program will pay for that part of the repairs that is not covered by the insurance purchased by state and local governments.

We found that a relatively large number of state and local government PA applicants had insurance—somewhere between 59 and 72 percent. But our analysis also showed that state and local insurance covered only 28 percent of overall repair costs.

When we drilled down into these numbers, we found that the percentage of repair costs covered by insurance differed in meaningful ways. For example, we found that the type of event causing the damage mattered. Earthquakes and floods had the lowest share of insurance—suggesting that these types of perils represent an important fiscal exposure to the federal government.

We also found that the size of the jurisdiction mattered. Jurisdictions with populations between 10,000 and 50,000 tend to have insurance that covers more of their repair costs than jurisdictions with smaller or larger populations. In the case of larger jurisdictions, this might reflect an increased use of risk-management tools that are less readily available to other communities. For example, large jurisdictions can more easily set up rainy-day funds, borrow from financial markets to repair damages, or rely on tax increases to cover losses. Large applicants do not have to deduct these other potential sources of revenue from their PA applications.

According to the experts interviewed for the study, FEMA assistance reduces incentives for many state and local governments to purchase insurance. Some entities buy only for facilities that they believe are critical to repair quickly and rely on FEMA to replace the rest. Others buy policies with lower limits or deductibles than they would otherwise. If FEMA were to eliminate its PA for buildings, contents, vehicles, and equipment, some experts predicted that there would be little change in the risk management practices of some public entities. But a more common view was that state and local governments would take more responsibility for managing their disaster risk.

Shifting more responsibility to state and local governments could encourage more resilient planning and building practices and encourage them to transfer some of that risk to the insurance market. After all, it is local governments that decide where buildings can be located and the resilience level to which they should be built—two factors that greatly influence the vulnerability of a community's and residents' assets. However, there are limits on the amount of risk it makes sense to keep at the state and local level. The potentially enormous losses that can result from floods, earthquakes, hurricanes, and other natural and human-caused hazards create challenges for private insurance markets, and insurance may not always be available at prices that are thought to accurately reflect risk. It is appropriate to share risk with the federal government in such cases.

The experts we spoke with identified four approaches for encouraging state and local governments to take more responsibility for their disaster losses:

Jason Thomas Barnosky is a senior political scientist, and Noreen Clancy is a senior policy analyst at the nonprofit, nonpartisan RAND Corporation. Lloyd Dixon is a senior economist at RAND and is the director of the RAND Center for Catastrophic Risk Management and Compensation.

This commentary originally appeared on The Hill on October 13, 2020. Commentary gives RAND researchers a platform to convey insights based on their professional expertise and often on their peer-reviewed research and analysis.