Ensuring the Safety and Integrity of the Vote 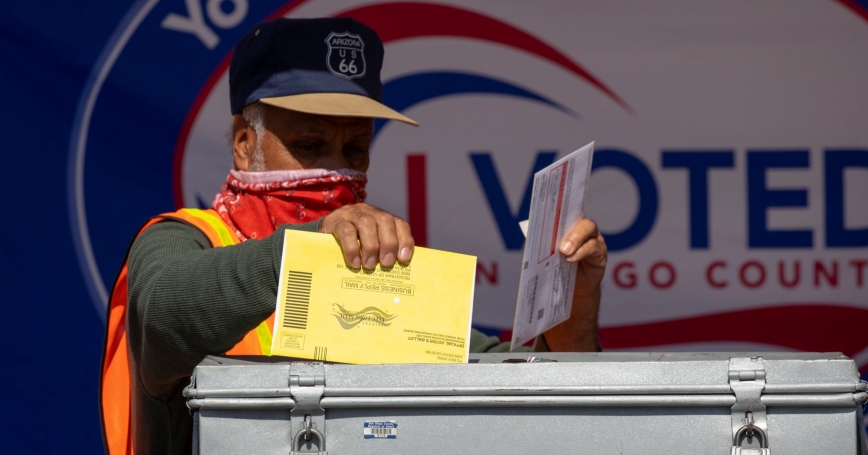 An election worker places mail-in ballots into a voting box at a drive-through drop-off location in San Diego, California, October 19, 2020

President Donald Trump's recent positive coronavirus diagnosis is a stark reminder of the continuing danger posed by COVID-19. The pandemic has thrown the election into disarray coming on top of disruptions to traditional campaigning and the increased burden on election officials. Still, with careful planning, the election can be held with integrity, while keeping the American electorate safe. But it will require everyone to help.

The United States is now approaching eight months of restrictions such as social distancing with no clear end yet in sight, despite some progress in vaccine trials. According to the U.S. Elections Project, nearly 40 million Americans had already cast their votes by mid-October, and more than 84 million have either requested or will automatically receive an absentee or mail-in ballot. Partisan battles are playing out not just on the campaign trail, but in the courts as well, as both sides challenge election-related measures, including the Texas governor's recent order to limit counties to one ballot drop box each and a successful appeal to the Supreme Court to reinstate the requirement for a witness statement on absentee ballots in South Carolina.

Early voting has begun in more than a dozen states, and voters have shown up in large numbers. Election officials and poll workers are committed to providing voters with a safe place to cast their ballots, but the challenges are considerable. Many states have struggled to recruit enough poll workers. Traditionally older, often retired Americans have made up a large portion of poll workers, but this population is more vulnerable to complications from COVID-19. Many election jurisdictions have turned to younger Americans and are asking companies to give their employees paid time off to volunteer.

The campaign is in its final weeks, and with significant partisanship, growing frustration with lockdown, social distancing, and a stubborn pandemic, the country could be in for a perfect storm on Election Day. Large crowds of people, some likely refusing to wear masks, partisan crowds near polling places to observe or intimidate, and long lines could provide COVID-19 the opening it needs to flare up in many places.

During the Spanish Flu pandemic that started in 1918, social distancing and masks were also used as public health measures.

The United States has been through this before and can learn lessons from that experience. During the Spanish Flu pandemic that started in 1918, social distancing and masks were also used as public health measures. For the midterm elections that year, officials emphasized such measures as key to ensuring safe in-person voting. Many states placed limits on indoor and outdoor campaign events, forcing candidates to advertise through newspaper ads and mailings. However, some communities lifted quarantine rules immediately before Election Day to allow candidates some time for in-person campaigning. Many of these communities suffered significant spikes in cases in the aftermath of the election, possibly as a result of this relaxation.

Despite extensive efforts to get out the vote, the 1918 election was affected by closed polling locations due to lack of healthy poll workers. The election also saw a drop in turnout, likely in part due to the pandemic but also because as World War I ended, many men remained deployed. Turnout remained high, however, in small rural communities. Where higher turnout overlapped with lax enforcement of safety measures, cases and deaths rose in the weeks after the election.

In 1918, early voting and absentee balloting were not as widespread as they are today. Another difference between 1918 and today is that 2020 is expected to have high voter turnout. Particularly with swirling concerns about absentee and mail-in ballots, many voters will go to the polls and run the risk of COVID-19 so they can avoid the risk of their vote not counting.

With coordination and planning, the election can be held safely.

Our research shows that with coordination and planning, the election can be held safely. First, voters have to be ready and make a plan. Know what the rules are in your state and jurisdiction, whether you plan to vote absentee (where available) or in-person. Even if you voted in the primary or in the last election, double-check the rules and where you can vote. They may have changed even in the last few weeks. If you plan to vote in person, be prepared to wait and bring your mask and sanitizer. Polling places will have some supplies, but they may run out. Consider adopting a voter, too, someone you can help to make a plan, or volunteering to be a poll worker to help ensure sufficient access to polling locations in your community.

For election officials, in the remaining days, make sure equipment is in working order, round up last-minute items like extra sanitizer and disposable pens. This is the busiest time, but with an influx of inexperienced poll workers, it bears taking extra time to work with them on election procedures and ensuring you have an experienced poll worker matched with each team. Most importantly, in 1918, places that let down their guard in the last week before the election or on Election Day did suffer consequences in the form of higher case rates and death totals from the pandemic. The pandemic won't take a break, and neither can we.

Jennifer Kavanagh is director of the Strategy, Doctrine, and Resources Program in the RAND Arroyo Center and a senior political scientist at the nonprofit, nonpartisan RAND Corporation. Quentin E. Hodgson is a senior international and defense researcher at RAND.

This commentary originally appeared on The Baltimore Sun on October 23, 2020. Commentary gives RAND researchers a platform to convey insights based on their professional expertise and often on their peer-reviewed research and analysis.