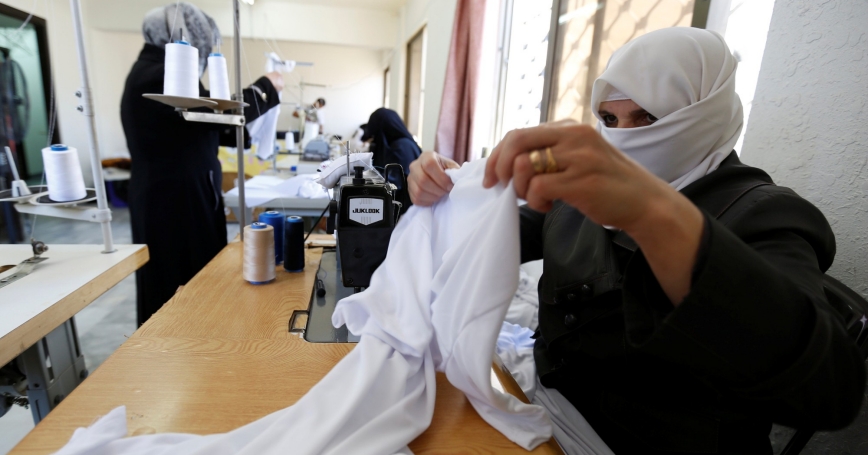 Meanwhile, host countries such as Lebanon, Jordan, and Turkey, which have some of the highest concentration of Syrian refugees, face challenges in meeting basic refugee needs while contending with their own struggling economies and people.

In our recently published Jobs Note (PDF), S4YE, along with our partner RAND, outline strategies to address employment obstacles for young Syrian women refugees in a post–COVID-19 environment.

Both refugees and disadvantaged host country populations are vulnerable and share many of the same struggles to meet basic needs.

Both refugees and disadvantaged host country populations are vulnerable and share many of the same struggles to meet basic needs. Targeting both vulnerable groups eases tensions between the communities and acknowledges the public good host countries provide when affording safe refuge to displaced populations. Programs like the World Bank's National Volunteer Service Program (NSVP) in Lebanon, for example, explicitly promote better relations between young Syrian refugees and Lebanese through shared volunteer work experiences.

Allowing workers to work for multiple employers and follow seasonal agricultural demand can help expand available opportunities for refugees. Most work permits have focused largely on traditionally male-dominated sectors such as construction and agriculture, thus limiting benefits for refugee women. Of the approximately 57,000 work permits approved for refugees in the agriculture and construction sectors from January 2016 to October 2018, only four percent were distributed to Syrian refugee women.

One area of opportunity in Jordan and Lebanon is the potential for growth in climate-smart and water-saving technologies. A large number of Syrian refugees worked in agriculture as unpaid workers on family farms or conducted seasonal work prior to fleeing Syria. According to one study, climate-smart investment in agriculture could boost refugee employment in this sector, especially for women, since certain types of agriculture jobs such as picking fruit and harvesting crops traditionally depend on female workers.

Include Business Training and Access to Finance for Potential Women Entrepreneurs

Another example is the EFE-Jordan program, which connects Syrian women refugees and Jordanian youth to mentors and business start-up financing. Since 2017, the EFE-Jordan program has linked 81 percent of entrepreneurship program graduates to start-up support in businesses such as home salons, bakeries, restaurants, and sewing shops.

Making small, home-made handicrafts for a decent wage can help mothers balance home care responsibilities while earning an income. An IKEA initiative employs a small number of Syrian refugee women in Jordan to make handicrafts. Although helping only a small number of women, the project demonstrates the possibility of women having the flexibility to work from home.

Syrian refugee women may be particularly susceptible to violence and harassment because of the lack of formal referral systems and fear of retaliation due to their vulnerable residency status.

Syrian refugee women may be particularly susceptible to violence and harassment.

In terms of safe transportation, RBK (ReBootKamp), a career accelerator for youth in Jordan, has added ride-share apps for young Syrian refugee women that allow them to travel to the RBK campus or workplace together. ILO has also encouraged more Syrian refugee women in the Jordan Zaatari camp to take jobs at nearby factories, and has arranged for transportation from inside the camp to the camp gates where employees can then take special buses provided by the factories.

This blog is based on the Addressing Employment Obstacles for Young Syrian Refugee Women Solutions Note, published in June 2020. This is the second post in a blog series outlining practical strategies to promote a gender-inclusive labor force, based on research and evidence from the World Bank Jobs Group's Solutions Notes. The Solutions Notes synthesize findings from the Jobs Umbrella Multidonor Trust Fund (MDTF)-funded activities and other sources based on research, evaluations, pilots, and operations. Each Note succinctly analyzes efforts and challenges, and provides an evaluation of what has worked, and what does not.

Namita Datta is a program manager at Solutions for Youth Employment (S4YE). Louay Constant is a senior policy researcher at the nonprofit, nonpartisan RAND Corporation. Kavell Joseph is a technical youth employment specialist at S4YE.

This commentary originally appeared on The World Bank Jobs and Development Blog on October 30, 2020. Commentary gives RAND researchers a platform to convey insights based on their professional expertise and often on their peer-reviewed research and analysis.