How Much Do Americans Value Their Health During the Pandemic? 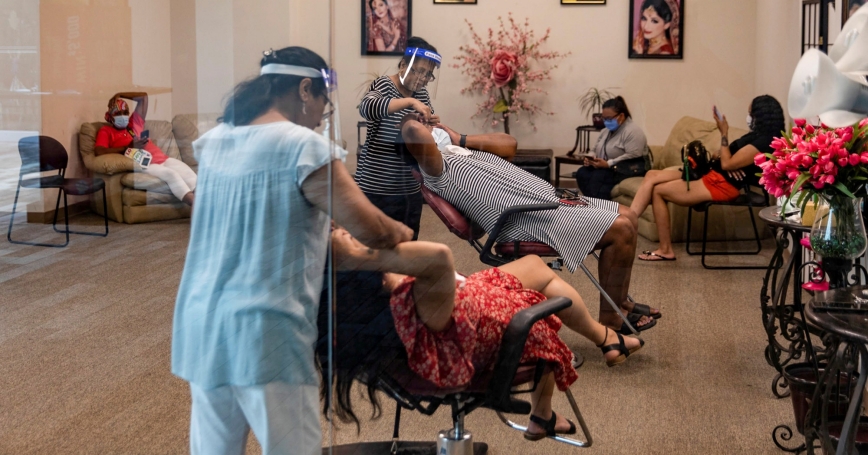 Customers are served at the Destiny USA mall during the reopening as COVID-19 restrictions are eased in Syracuse, New York, July 10, 2020

Are the social and economic costs of physical distancing measures justified by the health benefits of limiting COVID-19 transmission? To better understand how Americans weigh health against other priorities, RAND and the Robert Wood Johnson Foundation conducted a survey of American health attitudes during COVID-19.

As has been widely reported, the health and economic burdens of COVID-19 have fallen most heavily on poor, non-white populations—those who are more likely to hold jobs that cannot be done remotely, or who live in crowded housing, or who lack access to high-quality health care. We designed our sample to emphasize the perspectives of these populations: 59 percent of respondents identified themselves as non-white, and 44 percent reported an annual income of less than $50,000.[1] The survey was fielded during the summer of 2020 and provides an important first look at the issue of health priorities, liberty, and the economy.

Survey respondents placed a high priority on health, even where it implies limitations to their liberty and to the economy.

However, there were considerable differences between white and non-white respondents, even in our targeted sample. Non-Hispanic white respondents were more likely to somewhat or strongly agree that “reopening the economy is so important that it's worth increasing the risk of new coronavirus (COVID-19) infections and deaths” than other groups. (See Figure 1.)

Similarly, non-Hispanic white respondents were more likely than other groups to somewhat or strongly agree that “I am willing to risk my own health in order to return to normal life.” (See Figure 2.)

We also found little support for protesting against injustice during the pandemic, with only 17 percent of all respondents somewhat or strongly agreeing that “I think it is worth taking the risk to get coronavirus (COVID-19) to protest injustice, like police brutality.” That said, there were some variations among respondents, with non-Hispanic Black respondents most likely to somewhat or strongly agree. (See Figure 3.)

In spite of the difficulties they face, a strong majority (73 percent) of all respondents somewhat or strongly agreed that “the coronavirus outbreak represents an opportunity for our society to make positive changes,” with similar percentages across all racial groups. (See Figure 4.)

In short, most respondents in our sample placed a high priority on health when asked to weigh it against other important priorities such as economic activity and freedom of movement. This finding is perhaps particularly striking given that our largely low-income sample represents those with the most to lose from economic disruptions. Among the relatively small share of respondents who perceive that it is worth taking health risks for the economy or freedom of movement, the motivation differs by race, with non-Hispanic white respondents more likely to be motivated by the economy, but non-Hispanic Black respondents more likely to be motivated by protesting injustice. It is also striking that a large majority see the pandemic as a potential opportunity for change.

We will be fielding this survey at three subsequent points between now and summer 2021—with items that probe more deeply into the specific types of opportunities for change that respondents see emerging in the pandemic. This will also provide an opportunity to track how public opinion responds to another upsurge in cases, and the possibility of additional physical distancing measures.