Disaster Reporting and Its Impacts on Policy and Inequities 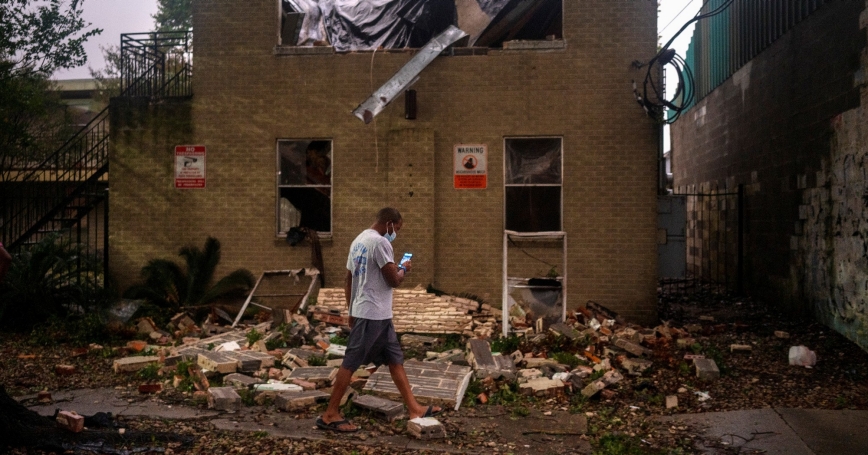 by Aaron Clark-Ginsberg and Shearon Roberts

It's more important than ever that news stories about disasters in the time of a pandemic frame the impacts of environmental phenomena in meaningful ways.

The combined effects of the global pandemic and disasters caused by natural hazards mean that it is critical for citizens and those in power to understand compounding factors when two forms of crises collide to impact communities. Factual and contextualized reporting also is a powerful tool in addressing disaster fatigue and the politicization of science. Such reporting advances careful and thoughtful responses to crises rather than rash reporting based in hysteria or sensationalism.

The global pandemic dominated the news of 2020 in the United States. Buried among this year's headlines is the fact that 2020 was a record-setting year for disasters caused by natural hazards. The 2020 Atlantic storm season is one of the busiest on record. And by October 2020, California's wildfires alone had burned a record-setting 4 million-plus acres, while 12 other states were also impacted. These are no longer rare occurrences of Mother Nature that will not be seen for generations to come. In fact, the last record set for wildfires in the United States was only 2018, with 1.7 million acres destroyed.

Disaster coverage in recent months carried details that were misreported and misrepresented. Coverage included exaggerated or sensationalized stories of looting, which can turn needed attention away from emergency relief and response and toward calls for vigilante behavior or martial law.

The impact of news coverage that perpetuates mayhem during and in the aftermath of disasters has been linked to law enforcement shootings of storm victims and the blaming of wildfires on homeless populations and their encampments on the West Coast.

Misreporting and misrepresentations also muddle the ways in which disasters lay open inequities in communities.

Misreporting and misrepresentations also muddle the ways in which disasters lay open inequities in communities. Television images of burning celebrity mansions do not convey to audiences that wealthy citizens are able to recover from devastating loss far more quickly than the average resident. Images of storms do not provide context that lower-income and minority neighborhoods are often more exposed and more vulnerable to severe wind and water damage because these communities lack resources and have been subject to historical and ongoing neglect.

Disaster news tropes may capture audiences' attention to news sites, feeds, and networks, but they ultimately frustrate progress in mitigating the short-term and long-term effects of disasters on communities.

Journalism can aid communities through ethical coverage of disasters through five key pillars.

Poor building codes. Underinvestment in preparedness. Health systems stretched to their brink. Institutions that expose marginalized communities to harm. There's a compelling story behind every disaster that needs to be reported on as part of understanding a crisis. Identifying the organizations, political decisions, and institutional structures that allow for risks to be created and fail to provide protection can help to make sense of a disaster by contextualizing events. Explaining causes can help people to understand why a disaster occurred and what might be done to prevent another in the future. Failing to report disaster causes leaves the critical “why” question unanswered in the standard news story formula of who-what-where-when-and-why. Journalism can provide models of how compounding factors in disaster outcomes might be presented to audiences in ways that enlighten rather than over-simplify. (For example, climate change can be an important causal factor to many disasters, but it is not the only factor.)

Disasters are not great equalizers. Instead, certain population groups are more highly affected when disasters hit than others due to factors such as where they live and their access to resources. To gain a better sense of a disaster's impacts, efforts should be made to capture these inequities. In our digitally connected world, journalists have more tools available to them to find eyewitnesses who are able to present these perspectives to audiences from the heart of a disaster. Journalists can amplify, verify, and shift narratives that showcase disparities, and allow audiences to perhaps understand larger issues at play. Reporting on the disparate impacts of COVID-19 on Black and Hispanic children is just one positive example of this kind of showcase.

Journalism can provide models of how compounding factors in disaster outcomes might be presented to audiences in ways that enlighten rather than over-simplify.

Disaster myths are well-documented: they result in anarchy, or looting, or they bring out the worst in people, or they are merely temporary. The reality is often the opposite of these myths. Instead of looting, people sometimes come together and support each other. Instead of anarchy, sometimes new forms of organizing arise. Perpetuating myths is sensational and can be detrimental to victims. Such reporting distracts from the facts and can stoke fears. Further, myth reporting seems to lay open the invitation for people to watch extreme forms of survival as entertainment. It also might falsely convey the idea that a simple charitable donation can make suffering disappear.

A disaster story does not always end when smoke disappears, or floodwaters retreat. If infrastructure is destroyed, a disaster might continue, as was the case following 2017's Hurricane Maria when over 4,000 more people died in Puerto Rico after the storm passed. Even this year, national headlines about Hurricane Laura moved on to the next storms of the Atlantic season without reporting that weeks later, many low-income and minority neighborhoods in Lake Charles, Louisiana, where the storm made landfall, still had no electricity, and residents remained homeless. Recovery processes can be long and unfold weeks, months, and even decades after a hazard strikes. In some cases, individuals and communities never truly recover—instead the traumas they suffer can manifest in mental and physical health problems that are passed down over generations. Covering the period after the hazard hits can help capture a fuller story.

Disasters can be shaped by man-made factors. Although still widely used by many disaster management professionals to describe disasters triggered by natural hazards, the term “natural disaster” can be misleading. Certain hazards might be natural, but disasters occur because of factors such as where people choose to live, or how much money is invested in maintenance and mitigation. The risks people experience accumulate slowly over time as an outcome of broader social decisions. Historic practices such as redlining have resulted in many Black communities being located in hazardous locations today. Environmental inequities today—like the uneven distribution of cancer causing toxins —lay the seeds for future disaster. Using the blanket term “natural disaster” perpetuates the narrow thinking that all disasters are “natural.” Instead, journalists should call these events “disasters caused by natural hazards” or, simply, “disasters.”

Aaron Clark-Ginsberg is an associate social scientist at the nonprofit, nonpartisan RAND Corporation. A disaster researcher by training, Clark-Ginsberg has conducted research on community resilience and disaster risk reduction in 10+ countries around the globe. Shearon Roberts is an associate professor of mass communication and African American and diaspora studies at Xavier University in New Orleans. She is the co-author of “Oil and Water: Media Lessons from Hurricane Katrina and the Deepwater Horizon Oil Disaster” and co-editor of “HBO's Treme and Post-Katrina Catharsis: The Mediated Rebirth of New Orleans.” She is a former journalist.

This commentary originally appeared on Poynter on November 16, 2020. Commentary gives RAND researchers a platform to convey insights based on their professional expertise and often on their peer-reviewed research and analysis.