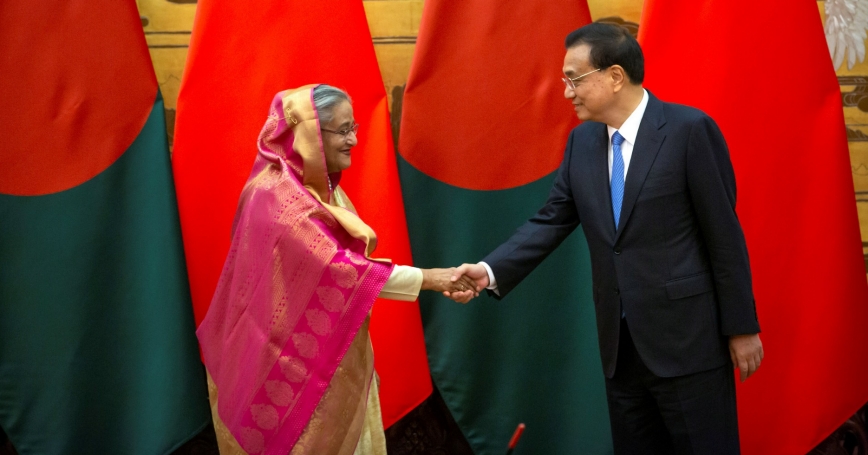 Photo by Mark Schiefelbein/Pool via Reuters

Much to India's frustration, China's influence is on the rise across South Asia. Key states that have traditionally prioritized New Delhi and remained within its strategic orbit—including Bangladesh, the Maldives, Nepal, and Sri Lanka—are increasingly turning to Beijing as an alternative power that can help meet their needs. China has smartly deployed diplomatic, economic, and security tools to deepen cooperation in a bid to assiduously secure its own national interests, which primarily involves currying favor with countries willing to provide geostrategic benefits.

Chinese Premier Li Keqiang visited Bangladesh in July 2019 and met with Prime Minister Sheikh Hasina. The two leaders focused their discussion on the need for the economic development of Bangladesh via China's Belt & Road Initiative (BRI). China likely seeks to leverage BRI development of a power hub at Payra to obtain port access there in the future. Indeed, the Chinese navy in 2016 made its first port visit, and again in 2017, to Chittagong. In June, the Chinese market opened to 97 percent of Bangladeshi products to follow up on a USD 250 million deal, that beat out India, to build a new airport terminal in Bangladesh. And in October, Chinese President Xi Jinping indicated he was ready to take China-Bangladesh relations to new heights.

China has smartly deployed diplomatic, economic, and security tools to deepen cooperation in a bid to assiduously secure its own national interests.

Following a surprise election result in late 2018, China lost its preferred Maldivian strongman in Abdulla Yameen. However, China-Maldives ties have remained cordial under President Ibrahim Mohamed Solih, even if Malé has swung back to prioritizing New Delhi. The problem for India is the massive debt Maldives has accrued due to participation in the BRI. Most notably, the completion of the China-Maldives Friendship Bridge, along with several other projects including expansion of the airport, have put the Maldives in a potentially untenable and dangerous situation. According to one estimate, Malé will owe 53 percent of government revenue to Beijing in 2021. Given that the Maldives straddles sea lines of communication in the Indian Ocean through which approximately 80 percent of energy imports and 50 percent of trade traverse, keeping Maldives within India's fold will be crucial going forward.

India has also become increasingly concerned about Nepal. Following the second informal summit between Xi and Indian Prime Minister Narendra Modi at Chennai in 2019, Xi went directly to Kathmandu to become the first Chinese head of state to visit in 23 years. While on the ground, Xi signed 20 agreements through the BRI to better enable China to develop and connect with Nepal, particularly through the Trans-Himalayan Multi-Dimensional Connectivity Network. The two countries further acknowledged that Tibet was part of “China's internal affairs.” Most recently, this month, China and Nepal finally agreed to a new height for Mount Everest, symbolizing their growing like-mindedness amidst ongoing China-India tensions along the Line of Actual Control in the Himalayas. Symbolism aside, China-Nepal defense ties are also strengthening. Chinese Defense Minister, Wei Fenghe, visited late last month, pledging to help protect Nepal's territorial integrity—a clear shot at long-simmering India-Nepal border disputes.

India will probably have to work overtime—and in concert with like-minded partners.

Finally, in Sri Lanka, the return of the Rajapaksa brothers—Gotabaya as President and Mahinda as Prime Minister—will probably be challenging for India. In the past, the Rajapaksas tended to favor Beijing over New Delhi, and particularly Chinese infrastructure investment. Indeed, they spearheaded the Colombo City port project via BRI that put Sri Lanka in significant debt. This then led to Chinese ownership of Hambantota port in the south and along critical sea lanes of the Indian Ocean. After reports surfaced that the Rajapaksas might seek to renegotiate the Hambantota port deal this time around, Mahinda in an exclusive interview with Chinese state-run media said that his comment had been taken out of context and that no such plans existed. Indeed, as of last month, the Rajapaksas appeared to be doubling-down on the BRI, in spite of a virtual summit in September between Gotabaya and Modi that was supposed to bolster relations.

All of these developments show that China isn't going away any time soon in South Asia. Quite the contrary, its influence is only rising. Thus, India will probably have to work overtime, and in concert with like-minded partners such as Australia, Japan, and the United States (perhaps within a Quad context?), to complicate and rein in China's successes in the region.

Derek Grossman is a senior defense analyst at the nonprofit, nonpartisan RAND Corporation and an adjunct professor at the University of Southern California. He formerly served as the daily intelligence briefer to the assistant secretary of defense for Asian and Pacific security affairs at the Pentagon

This commentary originally appeared on Observer Research Foundation on December 28, 2020. Commentary gives RAND researchers a platform to convey insights based on their professional expertise and often on their peer-reviewed research and analysis.