Why We 'Send Them Money' 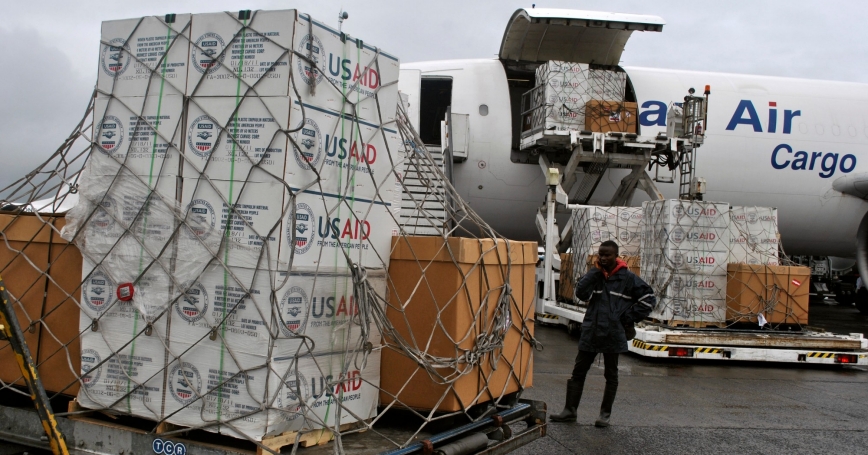 A consignment of USAID medical equipment is offloaded at the Roberts International Airport in Monrovia, Liberia, August 24, 2014

“It's a disgrace,” President Trump said of the recent COVID-19 relief and omnibus spending bill. Trump then rattled off a series of foreign aid programs that benefit Cambodia, Burma, Egypt, Pakistan, Belize, Costa Rica, El Salvador, Guatemala, Honduras, Nicaragua, and Panama as evidence that Congress prioritizes foreigners over hardworking Americans. Trump followed up by retweeting an old quip of his from 2014: “I hope we never find life on other planets because there's no doubt that the U.S. Government will start sending them money!”

Over the course of his presidency, Trump has repeatedly called for slashing funding by over 20 percent, only to have the idea rejected by Congress. This time, however, House Minority Leader Kevin McCarthy (R-CA) offered to reexamine U.S. spending on foreign operations. Beneath the rhetoric is a legitimate question: Why does the United States send foreign countries American taxpayer money? The answer, in short, is because it serves U.S. self-interest to do so.

Foreign assistance accounts for a fraction of the overall U.S. budget. In 2021, the Trump administration requested some $32.7 billion in foreign aid. That seems like a staggering sum, but not compared to the $2.3 trillion omnibus COVID-19 relief package passed by Congress. Moreover, in fiscal year 2018, towards the beginning of the Trump administration, the United States spent some $46.89 billion (PDF) on foreign assistance. Even then, though, this sum represented only one percent (PDF) of the total federal budget. While the foreign assistance budget grew in absolute terms as a result of the 9/11 terrorist attacks, the budget has hovered (PDF) roughly between one and two percent of the total U.S. budget for the last four decades.

Why does the United States send foreign countries American taxpayer money? The answer, in short, is because it serves U.S. self-interest to do so.

Foreign assistance will likely become a more important tool for American foreign policy in the coming years. As the Trump administration has argued (PDF), the United States is locked in competition with China, and foreign assistance forms an increasingly important front in this battle for global influence. While estimates vary, China may spend over $1 trillion on infrastructure in some 65 countries as part of its Belt and Road Initiative alone. These investments are not driven by benevolence. They trap countries in debt, bind them to China and potentially pave the way for future Chinese expansion. Countering Chinese influence may require more than artful negotiations. It may require the United States and its allies to offer an economically viable alternative to cheap, Chinese loans. Foreign assistance provides one such building block.

Admittedly, foreign assistance is not a panacea. It cannot deter China from flexing its muscles in the South China Sea, prevent Russia from waging a protracted conflict in Ukraine, deter Iran from backing its terrorist proxies throughout the Middle East, or dissuade North Korea from doubling down on its nuclear weapons programs. For those objectives, the United States relies on more coercive tools of statecraft, including military power. Foreign assistance programs, however, keep any number of other crises off this list of problems.

Aid is not some act of charity at the American taxpayers' expense; it can help keep Americans safer, more prosperous, and secure.

The public skepticism around the United States “sending them money,” however, will almost certainly remain, especially as the U.S. economy continues to be battered by the COVID-19 pandemic. And so, it may be worth reinforcing why we give foreign aid in the first place. Aid is not some act of charity at the American taxpayers' expense; it can help keep Americans safer, more prosperous, and secure.

This commentary originally appeared on The Hill on December 30, 2020. Commentary gives RAND researchers a platform to convey insights based on their professional expertise and often on their peer-reviewed research and analysis.