Patients Log On to See Their Own Doctors During the Pandemic 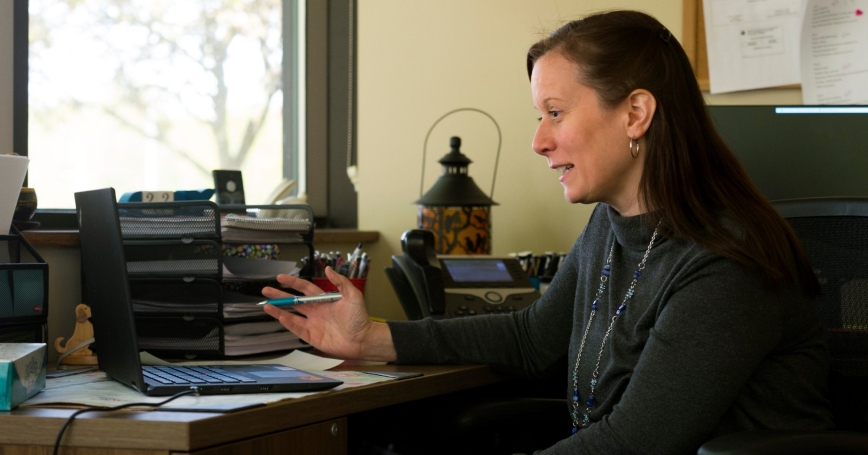 Therapist Heather Guinn conducts a virtual session with a patient via telemedicine, April 22, 2020

Telehealth use skyrocketed during the COVID-19 pandemic. Before the public health emergency, Medicare had 13,000 members with telehealth service claims; two months later, that number was almost 1.7 million. Similarly, the number of private claims for telehealth were 40 times higher in March 2020 than they were a year earlier. The availability of these virtual appointments when offices were closed, the newly allowed insurance coverage of such appointments, and the ability to use non-HIPAA secure platforms like Zoom and FaceTime, certainly drove much of the increase.

But a less-noted additional change may have played a role, too. An overwhelming majority of telehealth visits were conducted with a familiar doctor.

This finding emerged from a recent RAND study (PDF), appearing today in the Journal of General Internal Medicine, which used a nationally representative survey called the RAND American Life Panel to find out what patients were using telehealth for and who they were seeing. A total of 54% of respondents in this survey had one or more reasons to seek health care during the pandemic, either a pre-existing physical or behavioral health condition that was being treated when the pandemic began or a new condition that emerged during the pandemic.

About half of those patients received some kind of telehealth consultation by phone or by video, including 54% of behavioral health patients (Figure 1). In addition to the increase in use, what stands out is the extremely high proportion of telehealth users who saw their own doctor (in orange) as opposed to a new or unfamiliar doctor (in teal).

An overwhelming majority of telehealth visits were conducted with a familiar doctor.

Looking specifically at video visits, about 30% of those seeking care for a behavioral health condition used video visits, compared with 14% for chronic physical health conditions. Reaching one's own doctor via video call used to be exceedingly rare. Prior to the pandemic, only 4% of patients had ever conducted any video medical appointment; less than half of those who had done so in the past year had seen their own doctor. In contrast, during the pandemic, even among patients who sought care for a new or recurrent condition that was not being actively treated when the pandemic began, 21% had a video telehealth visit; for 82% of them it was with their own doctor.

In other words, the dramatic change in telehealth use was accompanied by patients' newfound ability to see their own doctors without leaving home. The change also echoes known preferences: other surveys find that patients are much more willing to use telehealth when they can see their own doctor. This may be a particularly challenging feature to preserve in the post–COVID-19 world because of competing demands on providers' time. Financial incentives could also return to favoring in-person care.

Patients are much more willing to use telehealth when they can see their own doctor.

Telehealth moved quickly from the periphery to the center of the health care delivery system during the pandemic, revealing its potential benefits to patients and providers alike. It also became clear what barriers prevented wider adoption before. After the declaration of a national emergency on March 13, regulatory changes made it easier for patients to get access to telehealth and expanded the cases in which providers could get reimbursed for such appointments. However, many of those regulatory changes are scheduled to sunset when the national emergency is over.

Can this form of high-quality, low-cost care be maintained post–COVID-19? As discussion of post-pandemic policies begins, what we've learned from patients' use of telehealth will provide valuable guidance. It appears that one key factor in accepting telehealth is seeing a familiar face on the other side of the screen.

Shira H. Fischer is a physician policy researcher at the nonpartisan, nonprofit RAND Corporation. Her research focus is health information technology research and policy. Joshua Breslau is a senior behavioral and social scientist at RAND. An anthropologist and epidemiologist with over two decades of research experience, Breslau's work focuses on social and cultural influences on psychiatric disorders and their treatment.