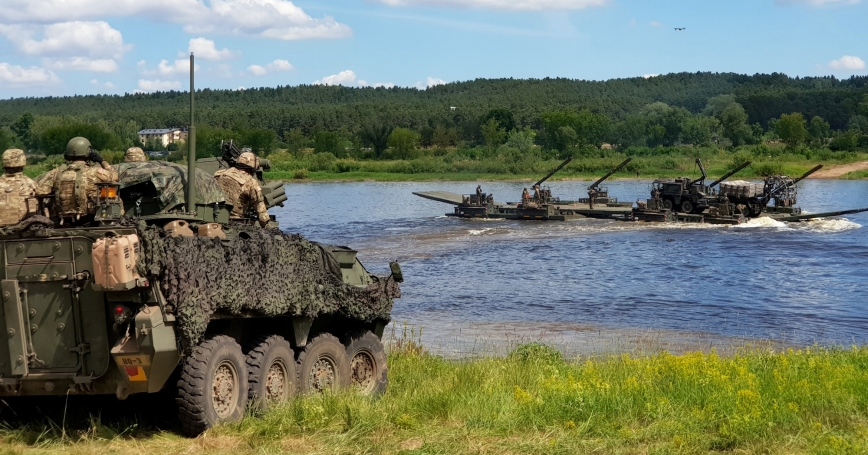 China built a wall to protect against foreign invaders, but Russia is erecting a barrier that could weaken its position. On its western border from Finland in the north to Georgia in the south, Russia has pressured neighbors and caused NATO to deploy more military force close to Russia. The Kremlin probably did not intend to hand NATO this opportunity.

Russia uses hard power—intimidation, coercion, disinformation—so often that the Kremlin may underrate the capacity or will of neighbors to resist. Seemingly aware of these risks, Foreign Minister Sergey Lavrov has warned of “NATO's unprecedented plans to move toward our borders and involve neutral countries—like Sweden and Finland—in its military exercises.”

Moscow's pressure on neighbors has spurred NATO to bolster its presence in Russia's immediate vicinity through such means as land power in Poland, air and naval power in Romania, and warship patrols in the Baltic and Black Seas.

A wary Finland is enhancing cooperation with NATO by making forces interoperable. Sweden, a target of Russian air and naval harassment, is implementing its biggest military budget increase in 70 years and expanding its armed forces by half.

Moscow's pressure on neighbors has spurred NATO to bolster its presence in Russia's immediate vicinity.

In Moldova last November a pro-Western candidate won a presidential vote by a landslide against an incumbent who appears to have taken Russian payments. Moldova is working with NATO to reform and modernize defense and security structures.

Aggression in Ukraine has spurred a strong reaction from the United States and NATO. After Russia in 2014 seized and annexed Ukraine's Crimea region and launched a still simmering war in eastern Ukraine (PDF), the West began providing Ukraine far more military support than it ever expected. Ukraine's armed forces number over a million active and reserve personnel, and their potency is growing.

The United States has provided over $1.7 billion in military aid to Ukraine, including $250 million approved by Congress last summer. Most has gone for training and for equipment such as counter-fire radar, Javelin anti-armor missies and naval patrol boats. Other NATO cooperation is underway. Contrary to ambivalence prior to Russia's invasion, Ukraine now sees NATO membership as the country's “strategic course.” Western military aid to Ukraine also helps tie down some of Russia's military power, which could threaten Western interests elsewhere.

On a more modest scale, the West is assisting Georgia to strengthen its territorial defenses, following Russia's 2008 war and the occupation of Georgia's Abkhazia and South Ossetian regions. Popular support in Georgia for joining NATO is strong.

On Russia's European border this leaves only Belarus as a close partner. Since the outbreak last August of huge street protests against the regime of President Alexander Lukashenko, Moscow has taken sides. It has sent propagandists to help Lukashenko disorient Belarusians, and it is promoting military integration. A massive joint military exercise next fall could see substantial Russian forces flowing into Belarus.

If at some point Lukashenko were to falter and the Kremlin used force to forestall the emergence of a more democratic government, the United States and NATO might consider deploying even more force in the alliance's eastern flank, especially Poland.

An eastward surge was not foreseen when the 1997 NATO-Russia Founding Act came into force. It vaguely promised that “in the current and foreseeable security environment” NATO would eschew “additional permanent stationing of substantial combat forces” in new member states. NATO has abided by this pledge, dispatching only rotational forces.

Absent Russia's overuse of hard power against neighbors, NATO would likely not have moved so much military presence so close to Russia.

Because much Russian transport though Ukraine is severed, Belarus is more important to Moscow's substantial trade with the EU. Any reduction in this access could reduce the reliability of energy transit to Europe, raise trade costs and barriers, and hinder Russia's ability to take economic advantage of its favorable geography between China and Europe. Economic competitors could exploit Russia's diminished access.

Absent Russia's overuse of hard power against neighbors, NATO would likely not have moved so much military presence so close to Russia. If it were to use substantial force against the people of Belarus, NATO might further bulk up its eastern flank. For example, a RAND study recommends that NATO deploy brigades, not just battalions, to the Baltics.

This commentary originally appeared on The Hill on January 22, 2021. Commentary gives RAND researchers a platform to convey insights based on their professional expertise and often on their peer-reviewed research and analysis.