Five Reasons to Be Wary of a New Domestic Terrorism Law 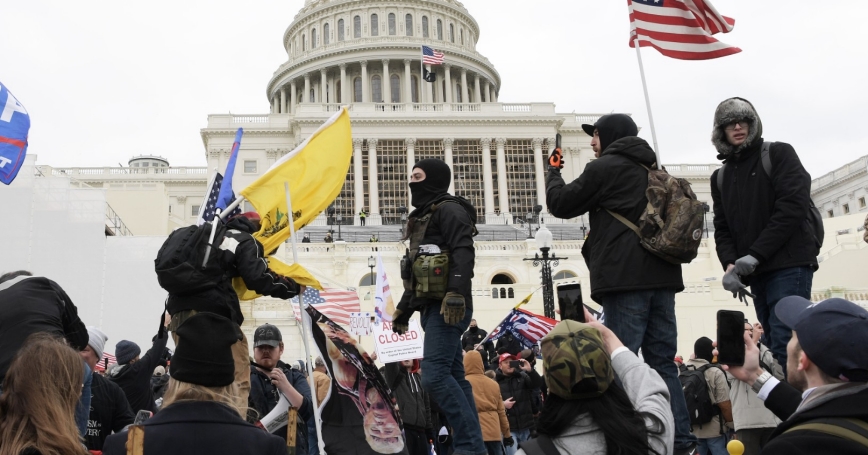 Trump supporters on the lawn of the U.S. Capitol in Washington, DC, January 6, 2021

Momentum is building in Congress for legislation to deal with domestic terrorism. Several bills already have been introduced. The mob attack on the Capitol on January 6, which some analysts argue met the definition of terrorism, added a sense of urgency.

Legislators are understandably angry. They are contending with increased threats of violence to themselves, their staffs, and their families. And yes, something must be done to deal with those seeking to intimidate if not physically harm public officials. But hastily crafted laws are dangerous and often produce unintended consequences.

When the Racketeer Influenced and Corrupt Organizations Act (RICO) was passed following the tumultuous 1960s, no one anticipated that it would be applied against anti-abortion protesters, or that the federal government would later consider using it against members of Black Lives Matter and antifa. The USA PATRIOT Act, which some currently see as a prototype for domestic terrorism legislation, sailed through Congress in three days and enabled a controversial expansion of electronic surveillance over U.S. citizens that the bill's sponsors never envisioned.

The USA PATRIOT Act and other international terrorism laws enacted after 9/11 were intended to address specific circumstances. They are not a template for dealing with domestic political violence, which has a completely different historical context. Still, what many in Congress seem to be seeking is a domestic version of the Patriot Act's material-support provision, which criminalizes providing material support to a designated foreign terrorist organization.

Prosecutors have interpreted material support broadly to include participation in propaganda activities, fundraising, even group membership—with no requirement to show any connection to furthering terrorism. The courts have gone along. But in the domestic environment, these activities will inevitably raise legal challenge under the First Amendment.

Who Gets Labeled a Terrorist?

Another thing about a material-support provision is that it requires designating specific groups as domestic terrorist organizations—therein lies the trouble.

Recent hearings indicated that there isn't much agreement in Congress around the definition of terrorism, let alone the identity of today's domestic terrorists. Some want to ensure that legislation covers the kind of violence sometimes associated with last year's protest movements against police violence; others are focused on the actions of far-right extremists.

The ensuing debate over who gets listed will be distracting and divisive in an area where national unity is essential.

According to just published research by the University of Chicago, based upon their statements on social media, about 10 percent of the invaders of the Capitol were members of known extremist groups—they came to fight. About 90 percent were ordinary people who believed that they were taking patriotic action to prevent the election from being stolen. They were wrong, but there is a risk of tarring a significant slice of the country as affiliating with terrorists. But the goal in dealing with domestic violent extremists is to isolate them from potential constituencies, not broaden the target.

No “terrorist” has gone unpunished for want of a law. Some in congress may think that adding a domestic equivalent of a material support provision will make crimes easier to prosecute. That's unlikely to be the case. Prosecutors will have to prove each defendant's participation and motive, and that may be difficult.

Homegrown jihadist terrorists were typically lone offenders who had to reckon their chances of success with a post-9/11 jury and its potential bias against Islamic defendants. They often negotiated a plea deal. (My research also shows that roughly half of jihadist terrorists who conducted attacks in the United States after 9/11 were prosecuted for ordinary criminal offenses, not providing material assistance.)

Domestic violent extremists, by contrast, will likely want their day in court. Trying them as ordinary criminal offenders would be simpler, less controversial and deprive them of their political pretensions.

Dealing with increased violence by domestic extremists may be the greatest legal challenge—and politically, the most delicate undertaking— this nation has faced since the Civil War.

American society traditionally has tolerated a wide range of behavior in political protest, even as participants crossed the line from lawful to unlawful and peaceful to violent. If conduct becomes bad enough—as in aggravated assaults or looting—ordinary criminal laws can be applied. If there are specific shortcomings in our laws, Congress can address them without using the word “terrorism.” Likewise, if there are hindrances to collecting intelligence or opening investigations, those things can probably can be dealt with through adjustments in the attorney general's guidelines with congressional oversight.

Dealing with increased violence by domestic extremists may be the greatest legal challenge—and politically, the most delicate undertaking— this nation has faced since the Civil War. But our current criminal statutes are adequate. They have been used successfully to weaken previous cohorts of white supremacists and defeat the left-wing bombers of the 1970s.

Instead of a new domestic terrorism law, this moment calls for rigorous and equal enforcement of existing law, treating offenders as ordinary criminals, and avoiding legislation that may undermine Americans' rights and create labels that deepen the current political divide.

Brian Michael Jenkins is a senior adviser to the president of the nonprofit, nonpartisan RAND Corporation. He has been researching terrorism for RAND since 1972.

This commentary originally appeared on The Hill on February 23, 2021. Commentary gives RAND researchers a platform to convey insights based on their professional expertise and often on their peer-reviewed research and analysis.