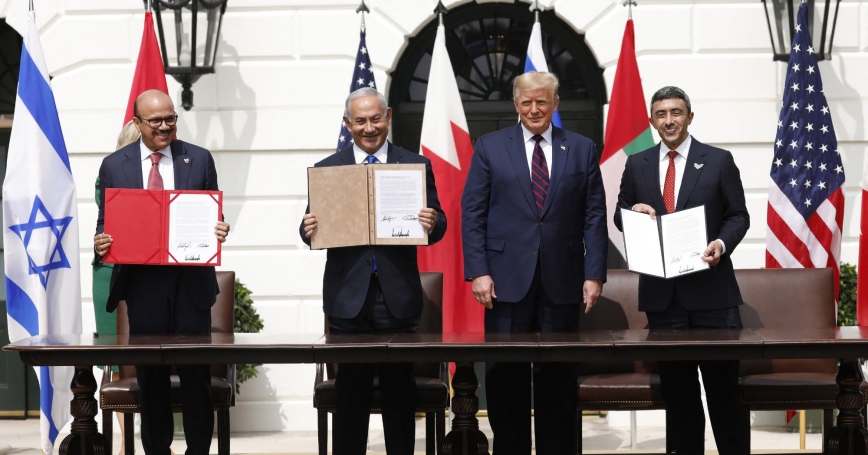 The Abraham Accords have heralded a dramatic shift in the relationship between Israel and the Muslim nations of the world.

While these accords represent a major political breakthrough, they also represent a possible new chapter in the region's development: away from conflict and toward a shared economic vision of prosperity. If these new relations evolve into deeper economic integration, we estimate that the economic benefits for Israel's partners in this endeavor could be particularly significant, creating about 150,000 new jobs for just the four current signatories. And this number could grow to more than 4 million new jobs and more than $1 trillion in new economic activity over a decade if the accords grow to include 11 nations (including Israel) as some have speculated may be possible.

Joe Biden endorsed these accords as a presidential candidate, while acting representative of the U.S. mission to the United Nations, Ambassador Richard Mills, vowed to continue promoting normalization. The Biden administration has the opportunity to build on them and serve U.S. interests in the Middle East by making economic integration and equitable development a signature initiative of his policy in the region.

Israel and the UAE provide a powerful foundation for the accords to spur regional economic growth. Each nation is a strong engine of development, embracing sophisticated technology, startup cultures, venture capital experience, and a drive to innovate, and has significant experience with bilateral and regional free trade agreements. Bilateral trade between Israel and the UAE is expected to grow by as much as $6.5 billion, including trade in both goods (including oil, precious metals, and defense) and services (including medicine, digital health, water and agriculture technology, cyber, and financial technology).

Analysts are also projecting robust bilateral private investment, including Emirati investment in Israeli gas fields and Arab-Israeli businesses, Israeli investment in Emirati fintech and digital banking, and joint investment in an oil pipeline. There has been a flurry of business delegations and other bilateral economic engagements, in addition to tens of thousands of Israeli tourists flocking to the UAE on a weekly basis.

The bilateral trade and economic exchanges between Israel and the UAE thus far are only the tip of the iceberg in terms of the economic potential of the accords.

The bilateral trade and economic exchanges between Israel and the UAE thus far are only the tip of the iceberg in terms of the economic potential of the accords. Our analysis, which builds on an approach we developed last year for examining the potential benefits of economic integration in the Levant nations, shows that economic integration in the form of a comprehensive free trade agreement that eliminates tariffs, lowers investment and nontariff barriers and waives visa requirements can have much larger benefits.

Our analysis of the potential of bilateral and pluri-lateral FTAs based on these accords found:

While acknowledging the benefits of normalization, many observers have not recognized the magnitude of the potential economic benefits. Critics have instead focused on what have been characterized as problematic U.S. “sweeteners” offered to individual nations to cinch the accords. These included offering to support export of sophisticated U.S.-origin arms to the UAE, removing Sudan from the U.S. State Sponsor of Terrorism list and recognizing Morocco's disputed claims over the Western Sahara. Others have pointed at the agreement's failure to address the Israeli-Palestinian conflict.

The motivation for the accords is a shared recognition among the partners that economic and political cooperation is an imperative for a positive shared future.

Our research demonstrates that these accords offer the United States something historic: the opportunity to be the anchor in a new political-economic bargain not so different from that achieved in postwar Europe. As with Europe, the motivation for the accords is a shared recognition among the partners that economic and political cooperation is an imperative for a positive shared future. Also like postwar Europe, success will likely require the United States to offer technical (and sometimes political and financial) support to achieve its full impact.

With this, the accords may provide a pathway for lasting peace, much like the peace that the architects of Europe's postwar recovery secured through the economic integration of Germany and France and then throughout much of the continent.

U.S. leadership will likely be integral in ensuring that these accords achieve their maximum economic potential, as implementation of such an FTA will be difficult, both politically and technically. In this, the disappointing experience of the Pan-Arab Free Trade Agreement and the failure of Israel's peace treaties with Jordan and Egypt to deliver meaningful economic benefits offer powerful cautionary tales.

A visionary U.S. policy could build on the accords to incentivize their implementation, with relevant market-oriented incentives supporting a process that we estimate could generate 4 million new jobs and $1 trillion in new economic activity over a decade for Israel's partners. This could do much to address the 25 percent youth unemployment rate among Israel's partners in the accords, support nascent opportunities for entrepreneurship and facilitate the school-to-work transition that is critical to vibrant economic growth.

The $3 billion Abraham Fund that was created alongside these accords, with its mandate to support inclusive economic development, is an important start. But an enduring and comprehensive U.S. policy will be critical in ensuring that these accords provide opportunities to the underserved, who are both the workforce of tomorrow and the foundation of stability in the region.

Daniel Egel is a senior economist at the nonprofit, nonpartisan RAND Corporation. Shira Efron is an adjunct scholar at the Modern War Institute and a special adviser on Israel for RAND. Linda Robinson is the director of the RAND Center for Middle East Public Policy and a senior international and defense researcher at RAND.