Climate Change Migration: Developing a Security Strategy for All 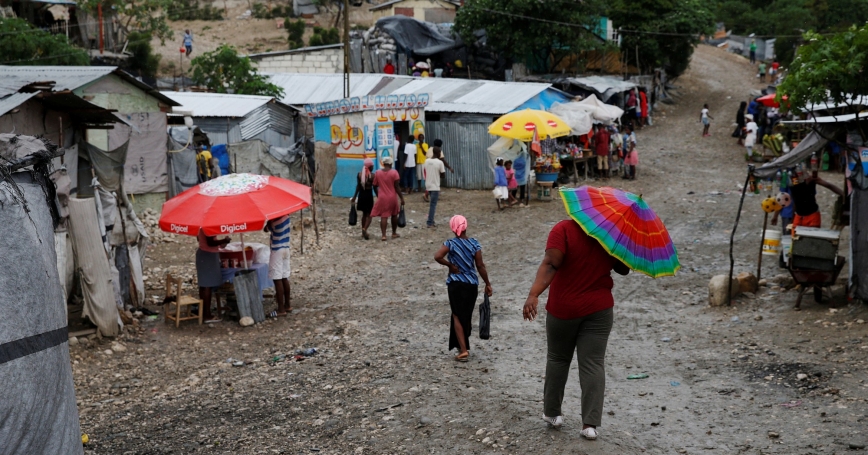 People walk down the street at a camp for displaced people while Hurricane Matthew approaches in Port-au-Prince, Haiti, October 3, 2016

Over the past decade, an average of 21.5 million people annually have been forced to move due to the impacts of extreme weather. That's three times as many people as have been affected by conflict, and almost nine times as many as those who have fled persecution. These numbers are expected to increase even more as the impacts of climate change grow and intersect with the effects of conflict, governance challenges, resource deprivation, and other manifestations of instability and insecurity.

Recognizing the gravity of the situation, President Joe Biden’s new executive order on Rebuilding and Enhancing Programs to Resettle Refugees and Planning for the Impact of Climate Change on Migration calls for examination of the international security implications of climate-related migration. Building an understanding of the intersection between climate change, migration, and security is crucial since the security implications of a changing climate remain highly uncertain. In building this understanding and developing an appropriate national strategy in response, though, one must be careful to recognize that many who face the most direct impacts of climate change—and those who will be forced into migration because of it—are already among the most vulnerable in communities and around the world.

The links between migration, marginalized and vulnerable populations, and issues of security are increasingly understood, but these relationships are complex, multifaceted, and highly context-dependent. People migrate for many different reasons—from a desire to secure a job or experience a new area, to flee from persecution, war, and other forms of violence. One common thread, however, is the role of resource access in shaping the migration experience. Migrants with more resources—better education, financial buffers, stronger social connections—require less material support from their communities and become more productive in their new homes. Those with fewer resources can struggle when they migrate. This struggle can build insecurity, at times manifesting in unrest, violence and conflict. Such manifestation can be found in conflicts between pastoralists over resources in the horn of Africa and the Sahel, in the food-induced riots in Haiti's slums in 2008, or in the ongoing Venezuelan protests and unrest.

And notably, too often the U.S. government's approaches to reducing these risks or the instability that results are band-aids that do not substantively and empathically address the underlying wounds. Some approaches involve reactionary security measures such as “walls and bombs (PDF),” responses that attack symptoms instead of causes. Other approaches involve top-down prescriptions that ignore local realities—such as the availability of resources for displaced families post-Hurricane Katrina—and governance factors—such as lack of government capacity to distribute humanitarian aid to displaced citizens. These prescriptions will likely not noticeably improve the lives of vulnerable and marginalized populations or address challenges in substantive ways.

As the United States builds a strategy that can address the security implications of climate change migration, it might instead seek to center its policy prescriptions on the most vulnerable in the country. The nation could serve as a convener, collector, and collaborator that can support, enhance, and amplify action at every level from the local to the international. All over the world, local practitioners, leaders, civil society organizations, and institutions are doing the hard work of addressing the challenges of climate change and implementing them in creative ways to enable greater population adaptation for those most vulnerable. From innovative land-use planning to address wildfires in California and the creation of rain gardens in New Orleans to the development of floating gardens (PDF) in Bangladesh and rice varieties (PDF) that can grow with saltwater intrusion in Sri Lanka, such interventions reduce pressures on populations to migrate in the first place, attacking the upstream source of the issue, while also improving communities' resilience to future climate change, enabling them to host potential migrants and to benefit from migrants' contributions.…

Jeannette Gaudry Haynie is a political scientist at the nonprofit, nonpartisan RAND Corporation. Her research focuses on conflict, violence, and instability through the perspective of vulnerable populations. Jay Balagna is a Ph.D. student at the Pardee RAND Graduate School and an assistant policy researcher at RAND. His research interests include disaster management and climate change. Aaron Clark-Ginsberg is a social scientist at RAND. His research focuses on disaster risk management and community resilience, including migration driven by climate change-related hazards.

This commentary originally appeared on The National Interest on March 14, 2021. Commentary gives RAND researchers a platform to convey insights based on their professional expertise and often on their peer-reviewed research and analysis.