Getting Out of Forever Wars: What Are Biden's Options in Afghanistan? 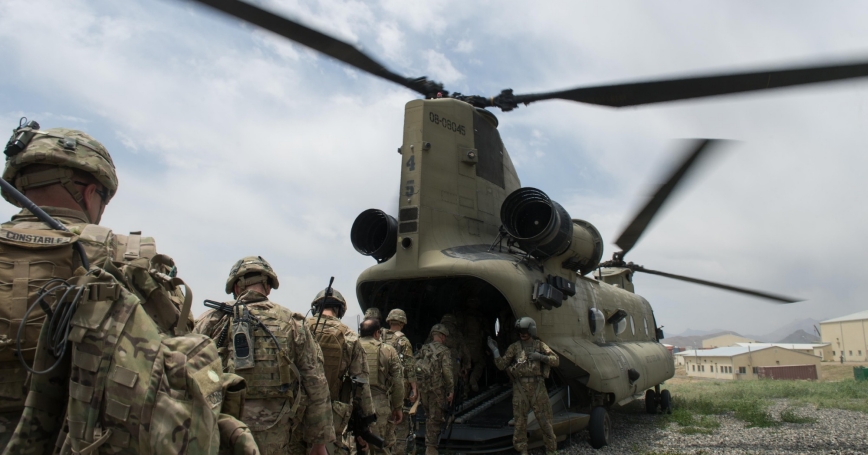 U.S. counterterrorism strategy has for a quarter-century been driven by the assumption that security at home depends on fighting the terrorists abroad. How will that square with President Biden's campaign pledge to “end the forever wars in Afghanistan and the Middle East?” Is it possible to get out of warfighting without shutting down vital counterterrorist operations?

In one of the most thorny decisions of his nascent administration, Biden must very soon decide whether to withdraw the remaining 2,500 U.S. troops from Afghanistan to meet a May 1 deadline agreed to by the Trump administration. Secretary of State Antony Blinken this month launched a diplomatic push to advance the Afghan peace process, but in a letter to Afghan President Ashraf Ghani, he underscored that “the United States has not ruled out any option.”

U.S. troop levels have been on a downward trajectory in Afghanistan since 2011. The declining troop levels reflect a shared desire by four presidents to reduce the U.S. military footprint in the region. But the four presidents have acted cautiously, not wanting to risk losing a war or allowing a jihadist return.

Biden's decisions on the last few thousand troops in Afghanistan will have great symbolic importance, signaling a strategic decision to the American public, American allies, and adversaries abroad.

As the number of remaining U.S. troops shrinks, each subsequent cut got smaller. Biden's decisions on the last few thousand, however, will have great symbolic importance, signaling a strategic decision to the American public, American allies, and adversaries abroad. The consequences could be enormous.

Each of Biden's options carries a high risk of resulting in bad outcomes. What could he be considering?

Pull out all troops and leave the Afghans on their own. That might satisfy critics of the wars, but it also could demoralize the Afghan forces and panic those who have benefited from advances in human rights under U.S. protection, while undermining other U.S. allies and emboldening its foes in the region.

Scrap the deadline for national security reasons. Biden could announce that further withdrawals would undermine U.S. national security interests, especially given that the Taliban have not met their commitment to lower the level of violence. And, according to the United Nations Monitoring Team, the Taliban remain close to al-Qaida.

Keep trimming. Biden might further reduce the number of U.S. forces while avoiding zero. The United States is, however, getting to the edge. Critics will argue that the few remaining combat forces are insufficient to accomplish any outcome of strategic utility to the United States.

Reframe the mission. Biden might argue that withdrawal was never intended to mean that the United States would cripple the Afghans by suspending assistance, training, or air operations. Instead, if withdrawal applies only to U.S. ground forces engaged in combat operations other than terrorism, that has been largely achieved.

Continue to push diplomacy. Even if Blinken's diplomatic efforts don't produce a breakthrough, the United States could still ignore the May 1 deadline, reasoning that it depended upon a reduction in violence, which has not occurred. If the Taliban overtly refused to go along, responsibility for continuing bloodshed would clearly be on them. The argument against such a diplomatic démarche is that it delays the inevitable and possibly opens the door to remaining in Afghanistan indefinitely—or even increasing military operations if the Taliban reject diplomacy.

Order a strategy review. The administration could delay any withdrawal while it conducts a broad strategic review of its global counterterrorism strategy. Proponents of this option could argue that it buys time to think through the consequences of withdrawal from Afghanistan as well as future troop withdrawals from Iraq, Syria, and other places.

As the president knows, there is no formula to calculate how many U.S. troops are needed overseas to reduce the risk of terrorist attacks happening here at home. Nor does extricating itself from armed conflict mean that the United States will cease to be a target. As the Russian revolutionary Leon Trotsky reportedly once said, “You may no longer be interested in war, but war is interested in you.”

To the proponents and opponents of any course of action in Afghanistan, the issues are clear. To a president who must reconcile often competing national interests, decisions are more complicated. Decisive action always looks good—but navigating a turbulent world requires trying to avoid unintended consequences, hedging bets, not foreclosing options, and above all, responding to inevitable events. In some cases, like in Afghanistan, this means aiming to secure the least bad outcome.

Brian Michael Jenkins is a former Green Beret and currently serves as senior adviser to the president of the RAND Corporation, where he initiated one of the nation's first research programs on terrorism in 1972. His books and monographs on terrorism include “International Terrorism: A New Mode of Conflict,” “Aviation, Terrorism and Security,” Unconquerable Nation, Will Terrorists Go Nuclear?, The Long Shadow of 9/11, When Armies Divide, and The Origin of America's Jihadists. A longer version of this commentary appears in the March issue of the Sentinel, published by the Combatting Terrorism Center at West Point.

This commentary originally appeared on Military Times on March 12, 2021. Commentary gives RAND researchers a platform to convey insights based on their professional expertise and often on their peer-reviewed research and analysis.