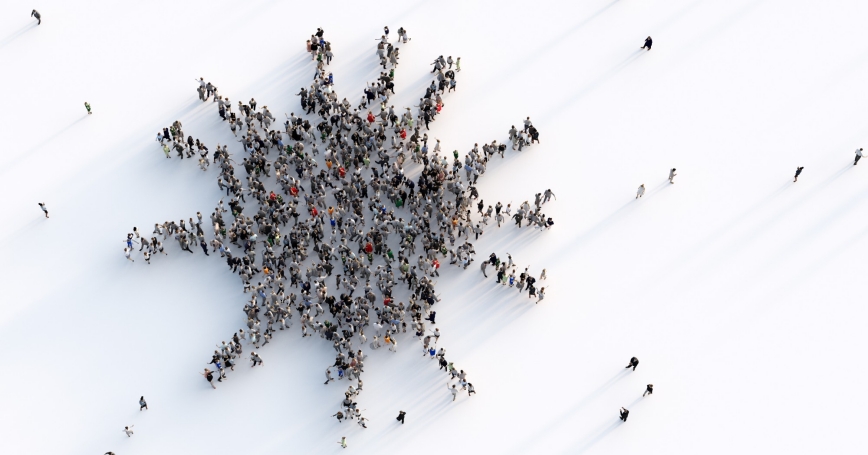 March 11, 2021, marked the one-year anniversary of the World Health Organization declaration of COVID-19 as a pandemic. Schools closed, workplaces were shut down or turned remote, and physical distancing policies separated families and friends. CDC has released data showing that in 2020 COVID-19 was the third leading causing of death in the United States.

The pandemic's impacts are extensive, even disrupting the very makeup of our society. Key demographic trends in fertility, mortality, and migration, when taken in combination, are responsible for shifts in the overall structure of any population. For example, decreasing fertility rates paired with rising mortality rates that surpass migration rates contribute to an aging population. COVID-19 has affected each of these, with potentially important implications.

The number of births per woman has been declining for a long time now. We need 2.1 births to replace ourselves as a population, and the developed world is already under two births per woman. Less developed regions are trending in this direction. Maintaining replacement fertility is important because lower birth rates translate into fewer people entering the labor force 20 years later, which affects our economy, and fewer new parents in the future, which can perpetuate the cycle.

There is evidence that fertility rates could get even lower due to COVID-19. An early COVID-19 survey (PDF) fielded in May 2020 by the Guttmacher Institute asked women ages 18–49 about their reproductive intentions. More than a third of women reported that because of the COVID-19 pandemic, they decided to get pregnant later or to have fewer children.

The pandemic's impacts are extensive, even disrupting the very makeup of our society.

One study uses historic information on the relationship between employment rates and changes in birth rates and the magnitude of the decline in births due to the 1918 influenza pandemic to project the likely change in births due to COVID-19. They predict a drop of 300,000 to 500,000 births in the United States.

While national data of U.S. fertility during the pandemic are not yet available, some states have released preliminary information. Philip Cohen, a sociologist at the University of Maryland, College Park has been documenting some of these findings. He finds a drop in the birth rate between five and ten percent across several U.S. states. California, for example, saw a ten percent drop in birth rates in December 2020 compared with December 2019. Preliminary data on Spain shows a 23 percent drop in birth rate between the December/January period of 2020–2021 compared to the prior year, suggesting that birth rate declines may be even greater in other countries.

The lingering question is how long-lasting this impact will be. The 1918 influenza pandemic led to a baby bust, but the decline in birth rates was temporary. On the other hand, birth rate declines that happened from the 2008 recession still have not returned to pre-2008 levels. Only time will tell how this will play out.

Long term, overall mortality has been declining in the United States, although we have been seeing an uptick in recent years. This could be exacerbated by COVID-19.

Most COVID-19 deaths have been among older adults, with people over ages 70 and 80 experiencing the bulk of COVID-19 mortality so far. Early in the pandemic it was nursing homes and communities of older adults that were hardest hit: Residents of long-term care facilities make up less than one percent of the population but in the pandemic's early months accounted for more than 40 percent of COVID-19 deaths. This is both because these facilities house older adults who are at greatest risk of dying of COVID-19 and because they are closed communities where the disease can spread very rapidly. In addition, workers coming from outside the community often work in multiple facilities, potentially introducing disease.

Furthermore, the distribution of COVID-19 deaths has not been uniform across race and ethnic groups. Recent data on provisional death rates compiled by the CDC from the National Center for Health Statistics show that a greater percent of deaths among Hispanic, non-Hispanic Black, and non-Hispanic American Indian or Alaska Native people relative to the percent of these racial and ethnic groups in the population.

These disproportionate death rates have the potential to change the very face of the population, placing greater burden on specific communities and groups.

Worldwide, more people than ever before live in a country other than the one in which they were born. This reached 272 million in 2019, an increase of 51 million since 2010. Currently, international migrants make up 3.5 percent of the global population.

COVID-19 has already had an impact on migration. Many migrants returned home at the start of COVID-19 to avoid closing borders. Also, with migrants losing jobs and facing higher risks of being infected due to overcrowded living conditions, many workers are returning to their countries of origin even now. Once they leave, closed borders make it hard to return to the United States. This means we are likely losing the international migrants who are key to certain industries.

Preliminary estimates from the United Nations suggests that the pandemic may have slowed the growth in the stock of international migrants by around two million by mid-2020, 27 percent less than projected.

It is difficult to know how this combination of trends will play out for population change and how quickly patterns will bounce back to pre-pandemic levels, if ever. Lower fertility rates coupled with lower levels of international migration could shift the population toward an older age structure, even with the decline in the older population created by increased mortality. Over the long run, population changes have implications for the available workforce and the larger economy. Consumption patterns would likely change, with decreased demand for parenting-related expenses and educational investment. Reduced fertility could lead to greater isolation and fewer family members available to care for aging adults.

Much attention has been given to increased childcare duties due to COVID-19, but the pandemic has also had direct impact on how care is being provided at older ages, with many families taking on increased home-care responsibilities to avoid risk of infection from home care workers. It will be important to track these changes to see if they persist longer-term. If so, this could fundamentally change the setting of care and the role of family in-care provision.

At this one-year anniversary of the start of the pandemic, it is important to think about how profoundly COVID-19 has disrupted the very makeup of our population and the potential implications of these demographic trends for society. As more time passes and new data become available, we will have a better sense of whether these disruptions will be short-lived or change the demography of the nation and the world for the foreseeable future.