Australia Contained COVID-19 Early On. Can It Do the Same with Synthetic Opioids? 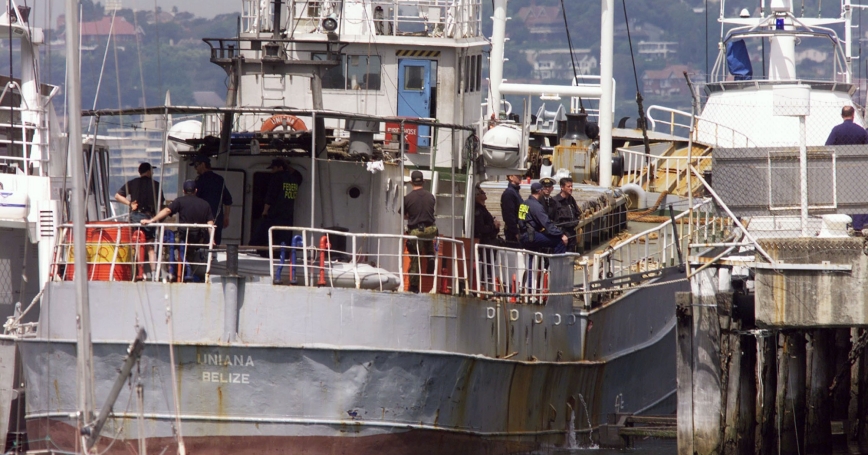 Australian authorities aboard a vessel involved in a heroin raid in Sydney, October 15, 1998

Australia's much-lauded response to COVID-19 involved spotting outbreaks early and moving quickly to quash them. That success may offer its policymakers some guidance on another possible deadly outbreak: overdoses from fentanyl and other illegally produced synthetic opioids.

Authorities, including the Australian Institute of Criminology and NSW Health, have already voiced concerns about the volume of synthetic opioids being sold on the dark web and how they are concealed in drugs sold as heroin or methamphetamine. Such drugs have contributed to historic numbers of overdose deaths in parts of North America, and if they create a similar level of damage in Australia, our estimate is that between 1,500 and 5,700 Australians may fatally overdose in the next five years.

Although illegally manufactured fentanyl is currently not widespread in Australia, several factors make the country vulnerable to its encroachment—so much so that it's surprising that it hasn't happened already.

Australia, like North America, has a sizable population of people who regularly use opioids and has followed a similar pattern of increasing access to prescription opioids. Although prescription numbers never hit the peaks seen in Canada or the United States, opioid analgesic prescriptions increased 15-fold from 1992 to 2012. Australia also has a stable heroin-injecting population of 30,000 to 65,000 people. Further, there are reports of misuse of diverted prescription fentanyl.

Although illegally manufactured fentanyl is currently not widespread in Australia, several factors make the country vulnerable to its encroachment.

On top of a sizable opioid-using population, Australia boasts high rates of internet connectivity and buying drugs on the dark net is not new for Australians. For those who sell illegal drugs, synthetic opioids are more profitable and easier to smuggle from China, where they are typically manufactured by underregulated producers.

The arrival of illegally manufactured fentanyl in markets is often precipitated by a supply disruption in heroin or prescription pills. Declining poppy and opium production in Myanmar, the principal source of heroin consumed in Australia, is a worrying sign. Recent efforts in Australia to curb access to prescription opioids also may reduce how much is diverted into illicit markets. Such supply shocks could encourage dealers to shift to easy-to-buy-online fentanyl.

In short, the conditions in Australia are such that a spark could set alight a bushfire. We see similarities to what transpired in North America, albeit on a much smaller scale.

Taking cues from Australia's COVID-19 response, there are multiple ways authorities can further guard against a synthetic opioid overdose epidemic.

Regularized federal efforts to monitor wastewater (which have found increases in fentanyl metabolites in more rural areas), local drug checking resources and technologies, or robust forensic analyses may alert public health authorities to emergence of potent opioids in real time. Australia already does some of this, but additional bio or chemical markers and protocols may be needed to detect novel opioids, including carfentanil metabolites.

For those who sell illegal drugs, synthetic opioids are more profitable and easier to smuggle from China.

With COVID-19, administering certain therapies to those with the virus has reduced mortality.

Australia boasts innovative responses to tackling opioid-related harms, including the provision of medication therapies and treatment, needle and syringe programs, and two supervised drug consumption sites. But to save more lives, Australia could still expand access to the opioid overdose reversal drug naloxone to those at greatest risk of exposure to fentanyl, like daily heroin injectors.

Australia's strong border restrictions, though often criticized, have helped keep the virus out of the country. Using customs and border control to restrict fentanyl's arrival through the post or commercial systems may similarly slow the drug's spread. Such efforts may include expanding the use of trained canine units, handheld scanning devices, or software to assess risks of in-bound items.

Australia is at risk of a fentanyl problem, but it is better prepared than North America. If the country can make the same kind of concerted effort it did to keep COVID-19 at bay, that could save thousands of lives.

Bryce Pardo is policy researcher at the nonprofit, nonpartisan RAND Corporation. Shann Hulme is a research leader at RAND Europe. Jirka Taylor is a policy analyst at RAND.