Biden Puts Japan at the Center of U.S. Policy in Asia 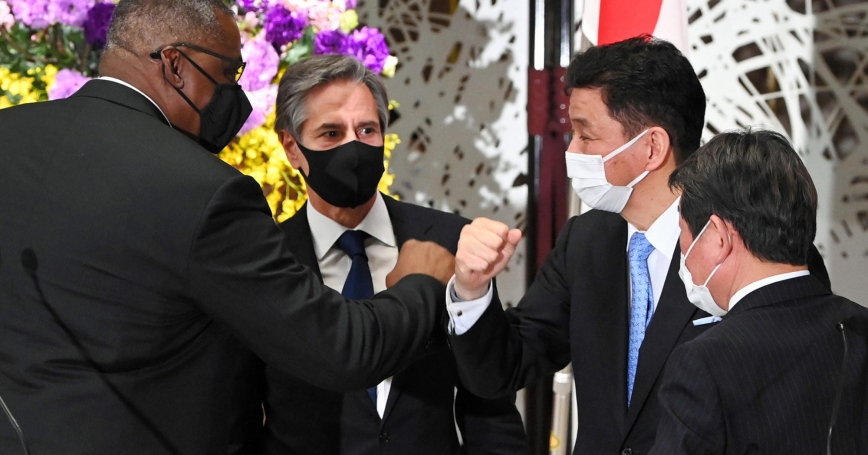 The late Harvard professor Ezra Vogel wrote a widely influential book titled Japan as Number One, which sought to extrapolate lessons from Japan's postwar economic success for the U.S. To borrow Vogel's title, Japan appears to be very much number one in terms of the Biden administration's initial foreign policy priorities.

Not only will Japanese Prime Minister Yoshihide Suga be the first foreign visitor to the White House, Washington seems to be embracing Japanese strategic concepts and concerns.

Consider first U.S. strategic messaging. With the Defense Department conducting a China review and a global force posture review, and the White House conducting a review of the national security strategy, the Biden administration could have chosen to revisit its Indo-Pacific engagement strategy, but it did not.

Instead, it continues the Free and Open Indo-Pacific (FOIP) strategy used by the Trump administration. The recent U.S.-Japan 2+2 statement reiterated the U.S. commitment to FOIP, as did the Quad leaders' joint statement.

What many forget, however, is that the concept originated with Japan. Back in 2016, then-PM Shinzo Abe gave a keynote address at a conference in Kenya where he declared that “Japan bears the responsibility of fostering the confluence of the Pacific and Indian Oceans and of Asia and Africa into a place that values freedom, the rule of law, and the market economy, free from force or coercion, and making it prosperous.”

Today, this is viewed as the launch of FOIP. Other countries have since adopted it or something similar to it. Biden's continued embrace of FOIP demonstrates the strategic and normative value that Japan maintains in U.S. foreign policy.

The Biden administration also drew attention by attending the first-ever heads-of-state meeting among Quad members. Like FOIP, Japan had a significant role in shaping the Quad. After starting as humanitarian assistance and disaster relief operation following the 2004 Indian Ocean tsunami, then-PM Abe tried to turn the Quad into a more formal gathering.

He later provided the conceptual sinews for the Quad we see today with a 2012 article arguing for a “strategy whereby Australia, India, Japan and the U.S. state of Hawaii form a diamond to safeguard the maritime commons stretching from the Indian Ocean region to the Western Pacific.”

The idea finally caught hold in 2017 after Chinese provocations against India and Australia and the election of a U.S. president more willing to push back against China. Biden's push for the first-ever meeting of Quad leaders so early in his administration again suggests the influence of Japan's strategic thinking in the Indo-Pacific region.

Japan's central role appears in the national security sphere. The first international trip by Secretary of State Antony Blinken and Secretary of Defense Lloyd Austin was to Tokyo, and their 2+2 joint statement reaffirmed that the alliance remains the cornerstone of peace, security and prosperity in the Indo-Pacific region, a strong statement of Japan's continuing importance to U.S. strategy.

More importantly, the joint statement's criticism of Chinese actions vis-a-vis the Japanese-administered Senkaku Islands, which China claims as the Diaoyu, reiterated the United States' unwavering commitment to the defense of Japan. This remains the only ongoing territorial issue the United States explicitly states that it is willing to fight over.

For example, it expressed serious concerns about recent disruptive developments in the region, specifically naming the China Coast Guard law, and concerns about the human rights situation in Hong Kong and the Xinjiang Uyghur Autonomous Region. The fact the United States chose to stipulate these concerns with Japan is significant. Similar explicit criticism was not included in the 2+2 statement issued with Seoul. As a New York Times article argued, U.S. overt criticism of China represented the kind of vigorous approach Japan has been seeking for years.

Whether it be adopting Japanese strategic concepts, prioritizing visits by foreign dignitaries, or reaffirming the long-standing alliance, Japan now seems to be at the center of U.S. foreign policy in the Indo-Pacific region. This makes sense. After all, like other allies, as Blinken and Austin reiterated in their Washington Post op-ed, Japan is a “force multiplier” for the United States.

Blinken said that the U.S. would work with allies to deal with China, which he called America's “biggest geopolitical test of the 21st century.” This necessitates working with allies and partners. As evident thus far, Japan appears to be one of the priority countries for the Biden administration.

This commentary originally appeared on Nikkei Asia on April 11, 2021. Commentary gives RAND researchers a platform to convey insights based on their professional expertise and often on their peer-reviewed research and analysis.