Now Is (Finally) the Time to Future-Proof Our Infrastructure 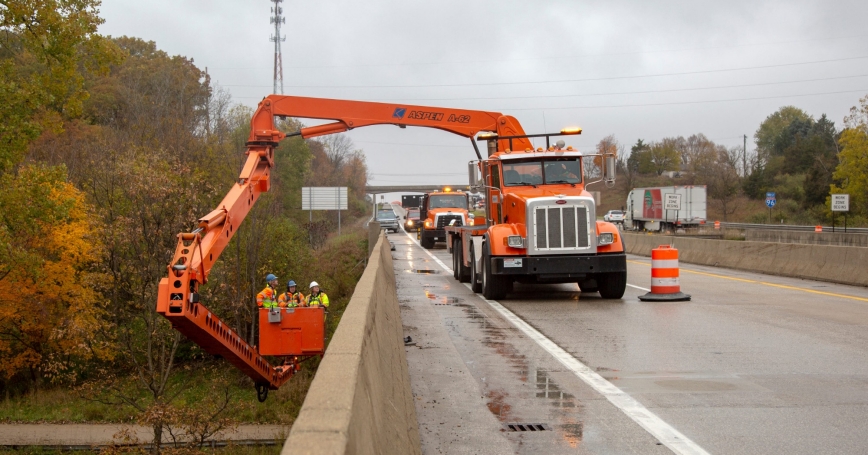 Workers on a bridge over the Grand River near Portland, Michigan, February 12, 2021

by Constantine Samaras and Mikhail Chester

Finally, it looks like Infrastructure Week is going to happen. Decades of disinvestment gave the country an infrastructure system that recently earned a “C-” on ASCE's Report Card for America's Infrastructure. And this is before climate change accelerates.

Extreme weather is becoming more frequent and more intense, and the world is barreling toward a more volatile climate with infrastructure designed for the past. With infrastructure widely expected to be prioritized in Congress soon, we need to recognize that every infrastructure bill is also a climate bill. It is critical that we make our infrastructure climate-safe.

The Texas deep-freeze is fresh in our minds, but before long summer will be here, and our power systems will have to cope with extreme heat instead of extreme cold. During heatwaves, natural gas, coal, and nuclear power plants lose efficiency because of higher temperatures of the air and river water, and some plants have to shut down when it gets too hot. Droughts, low streamflow, and the earlier melting of winter snowpack affect how much power hydroelectric dams can produce. Even the efficiency of wind, solar power, and batteries are reduced in extreme heat. To make matters worse, power lines and equipment also become less efficient during a heat wave, limiting the amount of electricity they can carry. All this adds up to an electricity system that produces less power during extreme heatwaves, just when vulnerable populations need air-conditioning the most.

When a road is washed out during an extreme storm, we all pay to rebuild it, again and again. That's a hidden carbon tax that we already pay, and these taxes are going up.

But it's not just the energy infrastructure that isn't ready for climate change, it's everything. Roads, water systems, dams, airports, and other infrastructure were mostly built decades ago for the temperatures and extreme storms of the past. Last year, there were 22 weather and climate disasters in the United States that each caused losses of more than a billion dollars. But instead of the government carrying insurance against these disasters, the public is the insurance—governments generally self-insure or under-insure their infrastructure against disaster costs. When a road is washed out during an extreme storm, we all pay to rebuild it, again and again. That's a hidden carbon tax that we already pay, and these taxes are going up. Since the federal government often pays for some of the upfront costs of infrastructure for states and cities, it is time to start requiring that this infrastructure be built climate-safe.

Infrastructure lasts a long time, and most of the infrastructure that will be in use in 2050 and beyond is already here. That storm drain in the street? It may have been there for 50 years or more, and in many cases can't carry the additional rain that falls now, and climate change will make this worse. Ninety-seven percent of the U.S. interstate highway system was built before NOAA started updating rainfall estimates in 2004, and 25% of the system was built before 1961.

What is needed is a fundamental reimagining of our infrastructure for a warming and increasingly complex world.

What is needed is a fundamental reimagining of our infrastructure for a warming and increasingly complex world. Our investments in infrastructure not only have to enable the rapid decarbonization of power, transportation, and buildings, but also must enable systems that are safe under the threats from climate change and which function across a mosaic of increasing volatility.

Strengthening our infrastructure is necessary, but so is thinking in new ways about what our infrastructure can do. For example, Kuala Lumpur's SMART tunnel typically carries traffic but during flash flood events can help in the removal of stormwater. Green infrastructure, which funnels stormwater into the ground instead of into the street, should be a standard feature in most of our communities, but it's not. These and other nature-based solutions integrated into traditional infrastructure can help alleviate extreme conditions. Because of increasing challenges from climate, as well as other threats such as cyber and physical attacks, it makes sense to plan for flexible infrastructure that can adapt under stress. And given the legacy of racism intertwined with infrastructure, the next systems that are built have to be climate safe for everybody, with equity and justice at the center of what it means to be resilient.

In the aftermath of the Texas energy infrastructure disaster, and the next disaster, political leaders may retreat to the trope of “nobody could have foreseen this.” But climate change and extreme event impacts are at least somewhat foreseeable—and they have been foreseen. What has been done about infrastructure and climate change—basically nothing—is also a policy choice, and it's one with devastating consequences. It's now time to build something for the future instead of the past.

Constantine Samaras is the director of the Center for Engineering and Resilience for Climate Adaptation at Carnegie Mellon University, an adjunct senior researcher at the nonprofit, nonpartisan RAND Corporation, and past chair of ASCE's Committee on Adaptation to a Changing Climate. Mikhail Chester is the director of the Metis Center for Infrastructure and Sustainable Engineering at Arizona State University and a member of ASCE's Committee on Sustainability.

This commentary originally appeared on Civil Engineering Source on March 31, 2021. Commentary gives RAND researchers a platform to convey insights based on their professional expertise and often on their peer-reviewed research and analysis.