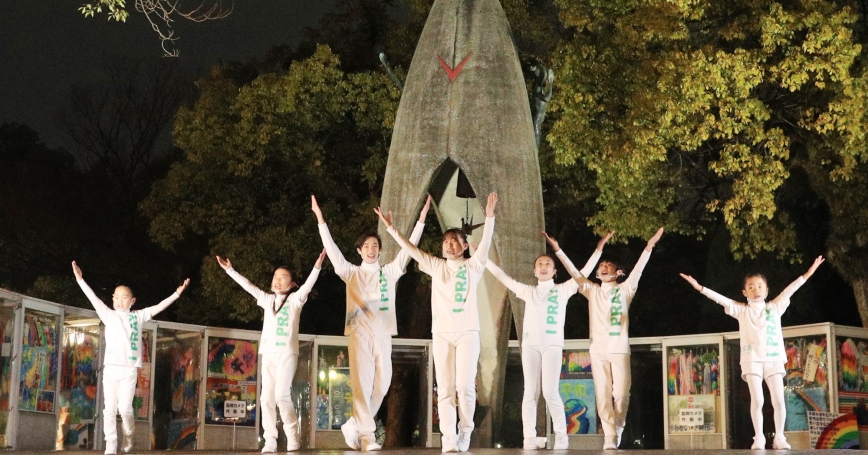 Children sing and dance in front of Children's Peace Monument to commemorate the coming into effect of the TPNW at Hiroshima Peace Memorial Park in Hiroshima, Japan, January 22, 2021

As the only country to suffer the horrors of wartime atomic bombings, one would assume Japan would eagerly sign any treaty to ban such weapons.

And yet, a decade after the first formal proposals for banning nuclear weapons emerged, Japan is conspicuously absent from the signatories of the Treaty on the Prohibition of Nuclear Weapons (TPNW), which took effect in January 2021. Why?

The treaty itself is profoundly divisive. Many doubted it would even enter into force.

At a 2019 Nuclear Policy Conference in Washington, D.C., gathering over 800 experts, an overwhelming majority incorrectly predicted the TPNW would not take effect by March 2021. Other skeptics described the TPNW as merely symbolic, as no nuclear power had joined.

Supporters of the treaty are confused by this skepticism and point to its long-term objective: to have a significant impact on the international community and change the perception of nuclear weapons.

The International Campaign to Abolish Nuclear Weapons even declared that this treaty marks the beginning of the end of the nuclear age. Now that the TPNW is a reality, this divisiveness is here to stay.

The government, however, does not. Recently, tensions have increased between hibakusha (atomic bombing survivors) and the government. While the hibakusha and their activists remain outraged by Japan's refusal to join, government officials continue to doubt the treaty's effectiveness and call for a realistic approach to disarmament.

Additionally, Japanese parties are divided on this issue: while conservative parties are generally against joining the treaty, liberal parties believe the opposite. This stalemate seems insurmountable.

What is behind the government's refusal to join? One explanation is the view that the treaty is not grounded in reality and will exacerbate the gap between nuclear and non-nuclear states.

As a self-proclaimed bridge-builder (hashiwatashi) between nuclear and non-nuclear weapons states, Tokyo does not see how this treaty can bridge that gap. Chief Cabinet Secretary Katsunobu Kato, for instance, states that although the government shares the TPNW's goal of nuclear abolition, the treaty is not in line with Japan's approach to disarmament.

Another reason behind this stance is Japan's alliance with the United States. As parliamentarian Seigo Kitamura puts it, if Japan signs, “the relationship of mutual trust between Japan and the United States will be damaged and end in divorce.”

This view underlies Japan's position of living under the U.S. nuclear umbrella for decades. Tokyo still considers U.S. extended nuclear deterrence as the only strategic option to deal with regional challenges.

Journalist Masakatsu Ota argues that Tokyo pursues an ambivalent nuclear policy he calls a “Nuclear Kabuki Play,” where it attempts to satisfy two audiences: the United States and the anti-nuclear domestic public. But reality suggests Japan's nuclear policy is even more nuanced than that.

Moreover, politicians' flashing of an indigenous nuclear option sends a useful message to adversaries and to the United States while also sparking exciting discussions in security-focused domestic circles.

The relevant audiences for Tokyo are, in fact, multiple, different, intertwined: the United States, the antinuclear part of the public, adversaries, and the growing conservatives among Japan's public.

Hence, the TPNW is seen by Japanese officials as tone-deaf to their concerns and disruptive of Japan's balancing act. Still, with the TPNW now a reality, mitigating the current domestic divisiveness is paramount.

In order to create better conditions for the treaty to be successful in the long run, the Japanese policy and academic communities need to gather and discuss implications of Tokyo's decisions vis-à-vis the treaty.

In seeking a solution to this dilemma and engaging with all the audiences, here are some questions Japan might consider in the coming years.

What are the impacts on the Japan-U.S. security treaty if Japan were to join the TPNW? The two are in theory not mutually exclusive, but that would require significant adjustments in the bilateral extended deterrence arrangement.

Now that North Korean missiles can reach the United States, however, credibility of the U.S. guarantee may suffer: the risk of decoupling is real. At the same time, the Biden administration could adjust U.S. nuclear policy if not bring about major changes.

The TPNW thus offers the opportunity to strengthen the discussion on the credibility of the nuclear umbrella.

A second question could be what message joining the treaty would send to nuclear-armed China. As both Washington and Tokyo enhance their understanding of Chinese nuclear doctrine, Japan may also need to carefully assess ways to build trust in Sino-Japanese relations.

The implementation of Tokyo's Free and Open Indo-Pacific vision requires Japan to be a reliable partner for Association of Southeast Asian Nations (ASEAN) countries. Since all but one ASEAN nation has joined the TPNW, Tokyo's timing and handling of this issue may impact Japan's future image and leadership.

Given the evolving security environment, it may not be the right time to de-emphasize extended nuclear deterrence. Yet leaving the diplomatic door open to the TPNW could be valuable for Japan's future position in the region.

This commentary originally appeared on Asahi Shimbun on April 28, 2021. Commentary gives RAND researchers a platform to convey insights based on their professional expertise and often on their peer-reviewed research and analysis.