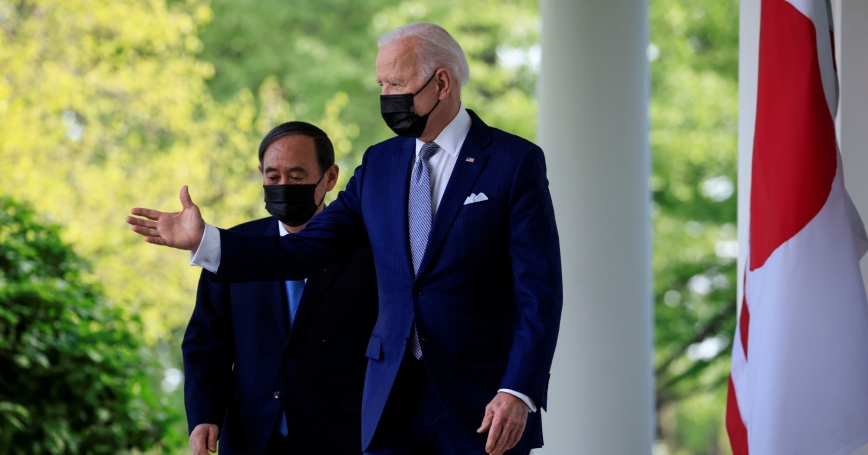 When Yoshihide Suga succeeded Shinzo Abe as prime minister last September, some experts expressed concern about his lack of foreign policy experience, calling him a “novice at diplomacy.” Separately, some Japanese government officials have worried that U.S. President Joe Biden might replicate former President Barack Obama's stance towards China, which was perceived as overly accommodating. Thus, when Suga and Biden met in Washington on April 16, it was not simply an opportunity to set the tone for the future of U.S.-Japan relations, it was also a political test for Suga and a chance for Biden to establish his bona fides with Tokyo. While some media outlets have characterized the summit as successful in showcasing a strong alliance, others have argued Japan was forced to take more hawkish foreign policy stances urged on by the Americans while failing to secure Biden's commitment to attend the Tokyo Olympic Games. The ultimate impact of the summit remains to be seen. Still, Suga and Biden accomplished their immediate objective of presenting a unified front and rekindling confidence in the alliance. They also highlighted several other important themes.

Biden has made engagement with allies one of his foreign policy objectives, but he has also sought to personalize this policy goal. Over the past few weeks, Japanese analysts have underscored the importance of Suga being the first foreign leader to meet with the new U.S. president. Biden's decision to have in-person meetings with Suga demonstrates what Secretary of State Antony Blinken has called America's “humility and confidence”—that it can rely on its allies more. Reflecting a personal warmth reminiscent of their predecessors Ronald Reagan and Yasuhiro Nakasone, Biden and Suga called each other “Yoshi” and “Joe” at the summit.

Japan as an Essential Partner for U.S. Policy Towards China

Japan is the Biden administration's key ally for advancing U.S. interests in the Indo-Pacific

The summit made clear that Japan is the Biden administration's key ally for advancing U.S. interests in the Indo-Pacific, with the joint statement laying out the allies' intentions to project strength and unity against an increasingly aggressive China. Some in Japan are concerned Suga is allowing the nation to be dragged into a potential conflict with China that could carry negative implications for the country's economic ties with its neighbor. Yet as the “two-plus-two” statement issued last month by top Japanese and U.S. diplomats and defense officials showed, the United States and Japan have already committed to coordinate pushbacks against China. This is recognition that they need each other if they are to preserve a free and open Indo-Pacific.

Taiwan's Security Directly Affects Both the United States and Japan

The joint statement also underscored the allies' focus on the importance of peace in the Taiwan Strait. It was the first time a U.S.-Japan summit joint statement mentioned Taiwan since 1969. The inclusion highlights the concerns Japanese and U.S. officials have about the possibility of a Chinese military attack on Taiwan. Chinese officials immediately reacted to the inclusion of Taiwan, with the Chinese embassy in Washington expressing “strong concern and firm opposition,” while the Chinese ambassador in Japan commented that interference on the question of Taiwan will not be tolerated. The mere mention of Taiwan in the statement is significant because it defines Taiwan as a foreign policy issue, not a Chinese “domestic affair” that outsiders have no right to interfere with, as Beijing claims.

A fourth aspect of the summit worth noting was its role in advancing efforts to counter global warming. Suga attended the virtual climate change conference the White House hosted on April 22. The two leaders also launched the Competitiveness and Resilience Partnership, which aims to advance a model of sustainable economic growth while addressing climate change through technological innovation and at the same time helping the Indo-Pacific region recover from the COVID-19 pandemic.

Further Support from Summit with Biden, but Challenges Ahead

The April 16 summit signaled a substantial deepening in the U.S.-Japan alliance, highlighting important new areas of cooperation and a concrete agenda for U.S.-Japan relations. But major domestic and foreign policy issues remain that could distract from or provide further impetus for allied cooperation. Prior to the summit, both China and South Korea reacted strongly to Japan's announcement that it plans to release treated radioactive water from the Fukushima Daiichi nuclear disaster into the Pacific Ocean. Japanese fishermen from the region also criticized the decision, arguing it would undermine market confidence in their products. Separately, at the post-summit press conference, Suga chose not to respond to a question about whether or not public health considerations would permit the country to follow through with hosting the Olympics this summer. A majority of the Japanese public remain opposed to holding the event. Despite the procurement of promises of additional supplies of Pfizer's COVID-19 vaccine, several major Japanese cities have again been put under a state of emergency.

The summit signaled a substantial deepening in the U.S.-Japan alliance, highlighting important new areas of cooperation and a concrete agenda for U.S.-Japan relations.

The United States issued a statement supporting Japan's approach to the disposal through dilution of the stored Fukushima wastewater, and Biden offered his personal support for Japan's “efforts to hold a safe and secure” Olympics this summer. Suga, whose domestic approval ratings remain low, has thus been able to draw substantial gains from the alliance, while Biden used it to answer the question of whether he might pursue a more China-centric foreign policy that prioritizes Beijing over Tokyo. Little wonder then that the latest polls show the Japanese public is overwhelmingly in favor of moves such as the two sides took this past week to continue strengthening the U.S.-Japan alliance.

Sayuri Romei is a Stanton nuclear security fellow and Scott W. Harold is a senior political scientist at the nonprofit, nonpartisan RAND Corporation.

This commentary originally appeared on Kyodo News on April 24, 2021. Commentary gives RAND researchers a platform to convey insights based on their professional expertise and often on their peer-reviewed research and analysis.