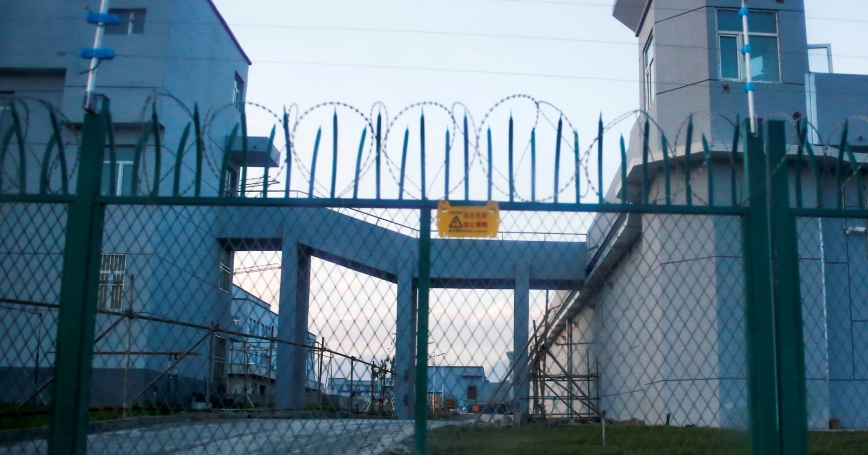 A perimeter fence around what is officially known as a vocational skills education center in Xinjiang Uyghur Autonomous Region, China, September 4, 2018

When President Biden hosts his first in-person summit meeting with Japanese Prime Minister Yoshihide Suga April 16th, one of the issues the two leaders will likely discuss is what to do about China's crimes against humanity against the Uyghurs and other Muslim minority groups in Xinjiang.

The United States, Canada, the European Union (PDF), and the United Kingdom have all introduced sanctions on officials and institutions involved in China's severe human rights abuses against the Uyghurs, while Australia and New Zealand recently issued a joint statement in support of such sanctions and have introduced legislation to enable their own governments to follow suit. In response, China has imposed visa bans on European diplomats, scholars, and research institutions. It is also weaponizing its markets and supply chains in an attempt to turn foreign businesses into defenders of the Communist regime's criminal activities. Japan, however, has been “lukewarm” in its response to global condemnation of China's behavior and has yet to join the sanctioning of the People's Republic of China officials and institutions. Why? And what options might the U.S. president have to encourage Japan to reconsider its position?

To be sure, Japan's hesitancy doesn't stem from China's actions in Xinjiang being in dispute, despite Chinese diplomats furiously denying abuse claims even in the face of direct visual evidence. Indeed, Chinese Communist Party General-Secretary Xi Jinping personally ordered his government to use “all the organs of dictatorship” and show “absolutely no mercy” in crushing the Uyghurs. One escapee noted that China's goal appears to be to “destroy everyone.”

Japan has been “lukewarm” in its response to global condemnation of China's behavior and has yet to join the sanctioning of the People's Republic of China officials and institutions.

United Nations officials, foreign diplomats, international news media outlets, scholars, and human rights organizations—relying on first-hand observation, escapee reporting, and overhead satellite imagery—have documented a wide variety of Chinese crimes against humanity in Xinjiang. These include bans on the use of Uyghur language, compulsory consumption of pork and alcohol, rape, forced sterilizations and mandatory birth control, forced labor and slavery, mass incarceration at no less than 380 concentration camps, and separation of children from their families.

As global condemnation has mounted, China has turned to suing those who report on its actions, while also seeking to surveil, intimidate, and silence Uyghurs abroad by making threats against their families who remain in Xinjiang. Japan is the only member of the G-7 not to impose sanctions, putting it on the other side of a number of key partners with whom it has been growing closer in recent years. It also sits oddly with Tokyo's vows to make “proactive contributions to peace” in support of a “free and open Indo-Pacific” with other members of the Quadrilateral Dialogue.

Cabinet Secretary Katsunobu Kato's explanation that Japan's foreign exchange and foreign trade laws lack provisions for imposing sanctions solely on the basis of human rights may be part of the reason for Japan's reticence. However, other factors may be at play as well, including a reflexive reluctance to criticize publicly other countries' human rights abuses. Concerns over Chinese economic retaliation, Tokyo Olympic Games boycotts, or that speaking out might prompt Beijing to be more aggressive in trying to annex the Senkaku Islands might also be at play.

What are the prospects Suga will announce that Japan will join in on sanctions when he visits Washington? Unfortunately, not particularly good if not urged on by his U.S. counterpart. Japan's experiences with China over the past three decades have shown that Tokyo can be deeply reluctant to stand in support of human rights in China, even when that policy has failed to produce results. Recently declassified documents, for example, demonstrate the futility of Japan's 1989 decision to break with the G-7 in not imposing sanctions following the Tiananmen Square massacre. This decision created friction with the West but did not prompt reforms within China, which seemed to learn that it could divide its critics, turn them against each other, and pocket the gains.

The Abe Shinzo administration, in which Suga was chief cabinet secretary, came to office partly on concerns that its predecessors had not been firm enough in dealing with China. The Abe and Suga administrations have shown greater willingness to stand up to China on a number of critical issues, including effectively banning Chinese participation in Japan's 5G networks, urging the Biden administration to treat Taiwan's security as a “red line,” and agreeing at the recent “2+2” meeting between the U.S. and Japanese foreign and defense senior leaders to “closely cooperate in the event of a military clash between China and Taiwan.” Moreover, Japan reportedly shared crucial intelligence on China's criminal activities in Xinjiang with the United States and the UK in December 2020. It is clear then that Japan knows about and understands the magnitude of China's atrocities in Xinjiang and has shown some, albeit limited, willingness to pay costs to support its own values.

Mounting a more effective response to the Chinese genocide would seem to require all U.S. allies and partners to pull their weight.

Mounting a more effective response to the Chinese genocide would seem to require all U.S. allies and partners to pull their weight and Biden might decide to employ some gaiatsu, or foreign pressure, to give Suga political cover to act more forcefully.

If so, Biden could urge his Japanese counterpart to introduce “Magnitsky legislation” in the Diet that would enable Tokyo to impose sanctions on China's criminal actions in Xinjiang. Biden could also encourage Suga to coordinate further on the issue of a boycott, either in full or in part, of the Chinese 2022 Olympic Games unless Beijing dismantles its concentration camps in Xinjiang and ceases its crimes against humanity. The president could describe for the prime minister the importance of the Uyghur Human Rights Policy Act of 2020, encouraging him to introduce similar legislation in the Diet. Finally, the president and the prime minister could discuss jointly introducing and enforcing additional legislation identifying and banning products involving forced labor from Xinjiang and requiring firms to ensure that they have no content from supply chains exploiting enslaved Uyghurs. Such moves would put Japan squarely on the side of the rest of the G-7 in condemning the on-going atrocities in Xinjiang.

This commentary originally appeared on The Hill on April 15, 2021. Commentary gives RAND researchers a platform to convey insights based on their professional expertise and often on their peer-reviewed research and analysis.