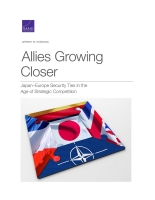 Japan–Europe Security Ties in the Age of Strategic Competition

Some of the United States' most powerful and trustworthy allies are its European partners and Japan. This report presents the results of a RAND Corporation study examining how Japan, the North Atlantic Treaty Organization (NATO), and three European states — the United Kingdom (UK), France, and Germany — are increasingly cooperating in the security domain in this age of growing strategic competition.

Seeking to build on extensive work done by European and Japanese scholars to assess and understand developments in these relationships, the author utilized official documents and publications and an extensive program of field research in Tokyo, London, Paris, Brussels, and Berlin that included 56 interviews with officials, armed forces personnel, and subject-matter experts.

The analysis focused on (1) defense and strategic dialogues, (2) defense exchanges, defense cooperation, and defense-related industrial cooperation, and (3) training and exercises. The results show that Japan–UK security ties are the most robust but lack an overarching strategy that pulls the separate lines of effort together into a coherent whole. Japan–France ties are significant and growing, and they fit well within the two countries' regional strategies, but the track record is less robust than that of Japan–UK ties. Japan's bilateral ties with Germany lack depth, but there is a growing convergence around strategic interests. Finally, Japan's ties with NATO lack regular dialogues and exchanges, but they have a growing record of cooperation in exercises and noncombat operations.

These discrete lines of effort matter, and closing recommendations offer ways they can further be fostered.

Japan's partnerships with the UK, France, Germany, and NATO share some similarities

The partnerships have implications for the United States

This research was sponsored by the Sasakawa Peace Foundation and conducted within the International Security and Defense Policy Center of the RAND National Security Research Division (NSRD).