The Link Between Extremism and Military Functioning 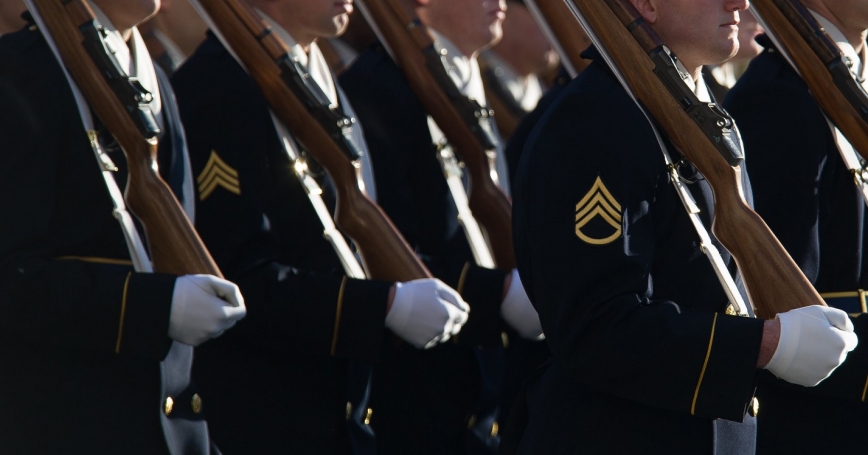 The Department of Defense clearly prohibits service members from actively participating in extremist activities. Now, some are proposing that this policy should be broader and include passive forms of participation like possessing extremist literature.

It's possible that two problems might arise by broadening policy to include passive forms of extremist activities.

First, there seems to be no clear standard for what is (or is not) extremism. For example, past military training materials have grouped together evangelical Christians, orthodox Judaism, and the Ku Klux Klan as extremism.

Second, military commanders are already responsible for intervening when they observe extremist activities. Indeed, current policy on extremism (PDF) places a tremendous responsibility on commanders: They must enforce the current ban on active forms of extremist participation and also intervene when they observe behaviors that may rise to the level of violating this policy in the future.

Take, for example, U.S. Army Pvt. Jeremy Wilcox, who created an online dating profile where he identified himself as a “U.S. Army Paratrooper,” stated that he was “a Pro-White activist,” and shared his racist and anarchist views with an undercover government agent whom he met online and then invited to a white supremacist rally.

At a minimum, Private Wilcox's behavior would represent “passive” extremism and may in fact rise to the level of active involvement. Should a commander have disciplined this private?

In 2008, the U.S. Court of Appeals for the Armed Forces said “no” based on military regulations and case law at this time. They noted evidence that Private Wilcox had a good working relationship with minorities in his unit, that there was no evidence his racist views affected his performance in the military, and found no evidence that his online views ever reached members of his unit.

So, if in the past some passive forms of participation, such as possession of extremist literature, have not always been found (by the military court) to be behaviors that could, in the future, rise to the level of banned (active) extremist activities, would extending the ban to all passive participation actually improve military discipline, morale, performance, and readiness?

One possible alternative approach to consider may be to help commanders in the challenging responsibility they're tasked with regarding addressing extremist activities. For instance, one meaningful measure might be to establish clear guidance on when extremist activities create a meaningful impact on unit cohesion, good order, discipline, health and safety, or mission accomplishment.

For example, Wilcox's racism may have had a clear impact on military performance if he had refused to work with people from historically underrepresented groups in his unit. Or, if other soldiers in his unit felt uncomfortable working with Wilcox after viewing his racist dating profile, that could have impacted the unit's ability to complete missions. In both examples, there is a clear link between one's extremist views and the performance of an individual or other soldiers.

DoD might also consider whether to retool existing military support programs designed to address earliest signs of extremist behaviors like those of Wilcox—such as Military OneSource, the Defense Equal Opportunity Management Institute, and the military mental health system, to name a few—that support commanders, their subordinates, and their families in confronting passive forms of extremism before they become active forms.

Military courts have ruled that service members do have freedoms of belief and expression insofar as such activities do not interfere with the needs of the armed services. The U.S. military has one of the most diverse force structures in the world, requiring members to interact with diverse groups of people each day. With some additional helpful guidance from DoD, it might not be that difficult for commanders to make the case that most extremist activity could negatively affect the functioning of the military—but the link, say the courts, must be clearly made.

This commentary originally appeared on Military Times on May 20, 2021. Commentary gives RAND researchers a platform to convey insights based on their professional expertise and often on their peer-reviewed research and analysis.