Takeaways from the Biden-Moon Summit: Three Observations on China 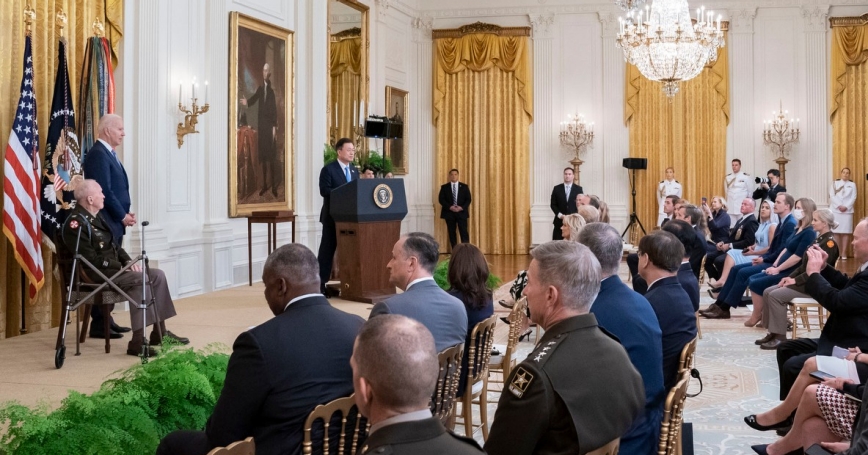 When U.S. President Joe Biden and South Korean President Moon Jae-in held their first summit on May 21, North Korea was not the only elephant in the room.

Rather, in the broader context of the Biden administration's foreign policy priorities and the Moon government's own geopolitical concerns, China was probably the larger presence.

Judging by media reports and statements from officials in both Washington and Seoul in the lead-up to the summit, the North Korea issue and South Korea's hopes of securing Washington's assistance in navigating a quagmire over COVID-19 vaccine supply and distribution were the two most pressing items on the agenda for both leaders.

So it came as little surprise when Biden and Moon announced their commitments to ongoing dialogue with North Korea on denuclearization and to the KORUS Vaccine Partnership. But when it came to China, the messaging was far more subtle.

While the two leaders used expressions that clearly referenced China such as being committed to an inclusive, free, and open Indo-Pacific region, as well as the rules-based international order and democratic values, they evaded any explicit mention of Beijing.

While [Biden and Moon] used expressions that clearly referenced China…they evaded any explicit mention of Beijing.

This may be a reflection of the high anxiety felt in Seoul when it comes to crossing Beijing by being seen to stand unequivocally with Washington on matters concerning U.S.-China relations and the competition for influence in the region.

I have three observations from the Biden-Moon meeting that may help parse the allies' tone toward China and what we can expect when it comes to future engagements with Beijing.

First, the Medal of Honor ceremony.

Biden awarded 94-year-old Korean War veteran Col. Ralph Puckett with the nation's highest military recognition for his actions during the conflict. Notably, Puckett led his soldiers against Chinese forces during the battle for Hill 205, part of a counteroffensive that marked the entrance of China's People's Liberation Army into the Korean War.

The ceremony can be interpreted as recognizing Puckett's valor and sacrifices in the war not only against North Korea but also against the Chinese military serving alongside North Korean troops fighting against U.S. and South Korean forces. Seen from Beijing, Moon's presence at the recognition ceremony—he is the first foreign leader to ever attend a Medal of Honor ceremony—as well as his lauding of Puckett as “a true hero of the Korean War” would have been unsettling, to say the least.

Second, the termination of the Revised Missile Guidelines, which had previously limited South Korea's ballistic missile range to 800 km.

The United States had previously capped the ranges and payloads of Seoul's missiles in part to avoid disconcerting China and Russia, and creating a catalyst for an escalation of the arms race.

From a technical perspective, termination of the missile guidelines allows Seoul to develop long-range precision-strike capability. Furthermore, South Korea may prioritize the development of intermediate-range ballistic missiles capable of reaching targets beyond the Korean Peninsula.

This does not only mean that Seoul, with its fast-developing weapons technology, will be able to deter and defend against potential threats from North Korea. It also means Seoul will help to enhance Washington's missile network across the entire Indo-Pacific theater to counter China's aggression.

In the joint statement, Washington and Seoul agreed on preserving peace and stability in the Taiwan Strait. Biden and Moon also underscored the importance of multilateral cooperation and coordination to address issues critical to regional stability, including freedom of navigation operations in the South China Sea.

In the follow-up media conference, Moon responded to a reporter's question on the China-Taiwan issue by saying that it was of importance to both the United States and South Korea while noting the “special characteristics” between China and Taiwan. Moon's response seemed an earnest, strenuous effort to maintain a reasonable distance from exposing Beijing before an international audience, lest Seoul bear the consequences in the form of diplomatic and economic pressure from Beijing.

China, for its part, subsequently warned the United States and South Korea against “playing with fire” and remarked that the leaders' joint statement was discouraging, reminding the international community that the Taiwan issue is an internal matter to China not subject to discussion by outsiders.

By all appearances, Washington and Seoul presented a coordinated approach on matters concerning China on the international stage. This, however, may not be a true indication that Seoul is completely on board with Washington's efforts to counter Beijing's aggression, as well what the United States sees as challenges to democracy and the rule of law, and China's somewhat brooding presence in the region.

South Korean officials, quickly perceiving China's close scrutiny of the meeting, owned up to the joint statement's explicit mention of cross-strait relations but appeared to seek vindication by reminding Beijing that the statement steered clear of specifying China by adhering to “phrases in generalities” and underscoring the importance of regional peace and stability.

The U.S.–South Korea summit reaffirmed the countries' shared history and common security interests and primed atmospherics to facilitate future-oriented expanded cooperation beyond matters concerning the immediate edge of the Korean Peninsula. This, if implemented thoroughly and across overlapping issues and initiatives—the Quad, for instance—may not only enhance Washington's position in the region but strengthen Seoul's own fortitude when it comes to standing up to China's aggression and occasional pressures, as well.

South Korea's ambivalence and hesitation when it comes to articulating a clear position either way remains a significant sticking point in the allies' ability to stick together and move forward on current and emerging challenges of common concern.

Such equivocation may breed tensions in the alliance and encourage Beijing to pressure Seoul even more. In the interests of shared democratic values and protecting the international rules-based order, Seoul may wish to consider whether to make an unequivocal strategic decision regarding its bilateral relations with both Washington and Beijing.

Soo Kim is a policy analyst at the nonprofit, nonpartisan RAND Corporation and adjunct professor at American University.

This commentary originally appeared on Nikkei Asia on June 6, 2021. Commentary gives RAND researchers a platform to convey insights based on their professional expertise and often on their peer-reviewed research and analysis.