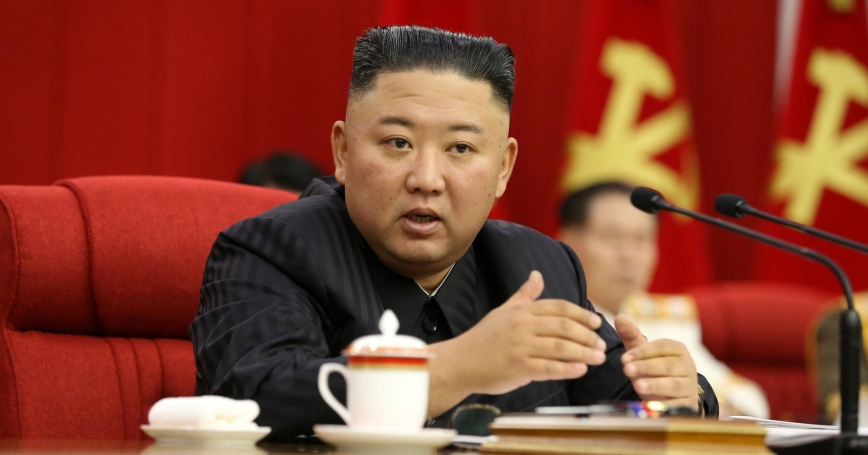 Kim Jong-un speaks during the 8th Central Committee meeting of the Workers' Party of Korea in Pyongyang, North Korea, in an image released June 17, 2021

The North Korean regime usually takes extreme efforts to prevent outsiders and even its own people from seeing instabilities in the North. But North Korean leader Kim Jong-un appears to be taking some risks trying to solidify his grip on the North in the wake of events undermining his control.

Nowhere is the potential for instability in North Korea greater than with regard to Kim's health. On five occasions in 2020, Kim disappeared from public view for at least 20 days at a time, raising serious questions about his wellness. That pattern of protracted absence has now apparently been repeated twice this year, with Kim returning most recently appearing to have lost significant weight. The amount of weight loss is much greater than would be expected by a simple diet over that period, and in any case, Kim has never shown significant self-control relative to his weight gain. He has previously experienced other physical problems.

At least one observer, Andrei Lankov, believes that Kim's health combined with new rules approved in January's Eighth Party Congress suggest that “Kim Jong-un and his inner circle believe they are heading toward trouble.” Kim has historically resisted allowing anyone to become established as the number two leader of North Korea, purging after a short time those who have appeared to have gained that position. But the new rules create an official number two position in the North Korean government and a fallback committee of five who could also run the North Korean government. No one outside of North Korea knows why this change has been made, or even if someone has been appointed to the number two position. According to an essay Lankov penned for NK News, “All these moves have only one reasonable explanation: The top leadership of North Korea, for some reason, has begun to make preparations for the sudden death or, more likely, long-term incapacitation of North Korea's current leader.” In short, the senior North Korean leaders appear to be attempting to manage a developing and potentially very unstable condition in the North.

It is useful to tie this development to other actions Kim has taken to enhance his control, and thereby identify instabilities he is trying to manage. One was the closing of the border with China, arguing that was needed to prevent the spread of COVID-19 into North Korea. The North lacks any significant health care system, and thus the spread of COVID-19 in the North could create major instabilities. Nevertheless, there is substantial evidence that COVID-19 has, in fact, spread, in North Korea, although the regime has denied any cases in an apparent effort to manage this instability.

By mid-2020 it is likely that that rate of COVID-19 infections in North Korea was equal to if not higher than in China, reducing the need to keep the border closed. With reports of extreme economic difficulty and starvation in North Korea due to the lack of goods especially from China, many have wondered why the North still keeps its border closed. There are two likely explanations associated with potential instabilities that Kim probably worries about. The first was that by providing and subsidizing food and other goods to North Korea, China had established a degree of influence over North Korea, something that Kim definitely does not want. In the Eighth Party Congress this year, Kim called for greater economic self-reliance in North Korea, which would counter Chinese influence at the risk of starvation and loss of consumer goods, creating alternative instabilities…

This commentary originally appeared on The National Interest on June 29, 2021. Commentary gives RAND researchers a platform to convey insights based on their professional expertise and often on their peer-reviewed research and analysis.