China and the Taliban Begin Their Romance 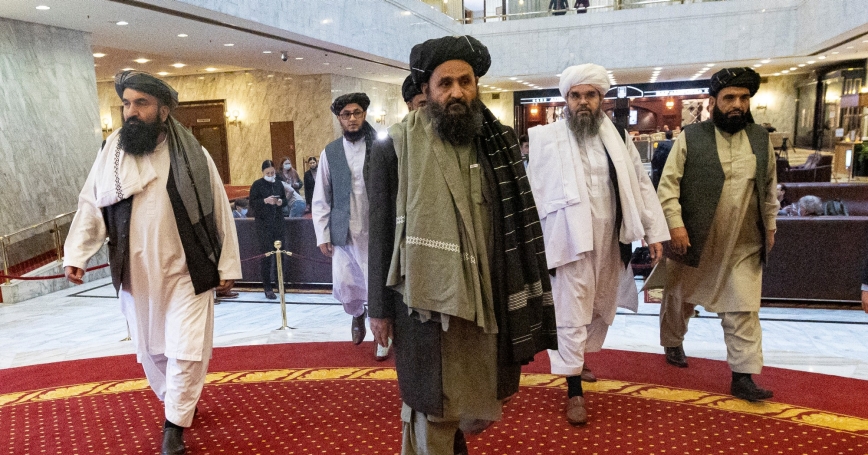 Photo by Alexander Zemlianichenko/Pool via Reuters

U.S. President Joe Biden's announcement that U.S. troops will be gone from Afghanistan by August 31 will remove the most formidable obstacle to total Taliban takeover of the country. The Taliban claim they already control as much as 85 percent of Afghan territory. In the absolute best-case scenario, the Afghan government and the Taliban might share power, but that seems increasingly like wishful thinking.

For 20 years, the United States' presence in Afghanistan, though not always appreciated, has nevertheless served as a predictable and stabilizing force. Now, the prospect of renewed Taliban rule has sparked major anxiety among the region's powers. For example, earlier this month, Indian Minister of External Affairs S. Jaishankar visited Moscow and Tehran while Taliban representatives were in each city, raising questions about whether back-channel negotiations are ongoing. Moscow is preparing to leverage the six-nation Collective Security Treaty Organization to address potential trouble at the Afghan-Tajik border, which is being taken over by the Taliban on the Afghan side. As Pakistan's relations with the Afghan government rapidly unravel, Islamabad appears to have negotiated a quid pro quo with the Taliban to reject U.S. bases on Pakistani territory in exchange for the Taliban's assistance in combating Pakistan's own Taliban-style militants, the organization known as Tehrik-i-Taliban. Meanwhile, the Shanghai Cooperation Organization, an economic and security grouping comprising China, India, Pakistan, Russia, and four Central Asian states, met last week with future Afghan stability at the top of their agenda.

Amid all of this regional angst, China is quietly attempting to secure its interests in post-U.S. Afghanistan. Beijing has reportedly been actively engaging with Kabul on construction of the Peshawar-Kabul motorway, which would connect Pakistan to Afghanistan and make Kabul a participant in China's massive infrastructure and investment plan, the Belt and Road Initiative. Up until now, Kabul has resisted participation in the initiative to avoid getting on the wrong side of Washington. Beijing is also building a major road through the Wakhan Corridor—a slim strip of mountainous territory connecting China's westernmost province of Xinjiang to Afghanistan—and onward to Pakistan and Central Asia, complementing its existing road network through the region. Once completed, these new thoroughfares should enable Beijing to pursue its goals of increased trade with the region and natural resource extraction in Afghanistan. According to a 2014 report, Afghanistan may possess nearly a trillion dollars' worth of extractable rare-earth metals locked within its mountains.

But in order to access these benefits, Afghanistan must first become stable and secure. With a Taliban takeover looming, China received some good news two weeks ago: Taliban spokesman Suhail Shaheen said in an interview that “China is a friendly country and we welcome it for reconstruction and developing Afghanistan…if [the Chinese] have investments, of course we will ensure their safety.” Moreover, on the sensitive issue of whether the Taliban might support alleged Uyghur militants against China in neighboring Xinjiang, Shaheen noted, “We care about the oppression of Muslims, be it in Palestine, in Myanmar, or in China, and we care about the oppression of non-Muslims anywhere in the world. But what we are not going to do is interfere in China's internal affairs.” These words were clearly intended to please Beijing, which appears to be starting off on exactly the right foot with the Taliban should the group regain control over Afghanistan.

For its part, while Beijing officially supports Afghan national reconciliation, it is also sending strong signals that it plans to treat the Taliban as the legitimate government of Afghanistan should such a moment come to pass. Yesterday, the Global Times, a mouthpiece of the Chinese Communist Party, argued that “making an enemy of the Taliban was not in the interest of China.” And last week, the outlet cited a Chinese expert arguing that “the Taliban [are] quietly transforming to become more like a political organization focusing on the internal affairs of Afghanistan, and it is preparing to take power.” In an interview with reporters, Chinese Foreign Minister Wang Yi urged the Taliban to make a “clean break” with terrorism should the group retake Afghanistan. To be sure, Beijing has been preparing for just such a scenario. China first publicly hosted Taliban representatives for negotiations in 2019, and private communications have very likely been ongoing for longer.

Beijing has also been deepening its already “ironclad” friendship with Islamabad to more effectively deal with any negative consequences of instability in Afghanistan. During the ceremony commemorating the 70th anniversary of China-Pakistan relations earlier this month, Wang said, “We should join hands in safeguarding regional peace, support the parties in Afghanistan in seeking a political solution through dialogue, effectively contain spillover of Afghanistan's security risks, and ensure overall stability in the region.” Beijing will lean heavily on Islamabad to productively engage with, and perhaps control, the Taliban.

Going forward, assuming the Taliban retake Afghanistan, the nature of China-Taliban ties will be geostrategically significant. A sustained positive relationship may further enable Beijing to make broad economic and security inroads into Afghanistan and Central Asia. Beijing already has strong bilateral and multilateral relations throughout the region (not least via the Shanghai Cooperation Organization), but an improved relationship with Afghanistan will pay even larger dividends. If the Taliban stay true to their word—a big if—then Beijing is set to benefit from Belt and Road projects transiting Afghanistan as well as what China frames as counterterrorism cooperation against Uyghur extremists in Xinjiang.

Assuming the Taliban retake Afghanistan, the nature of China-Taliban ties will be geostrategically significant.

Beijing's growing clout in the region, spurred on by closer ties to the Taliban, could also raise suspicions in Moscow that China is eclipsing Russia as the dominant power in Central Asia—potentially adding a rare friction point to their relationship. Although India also appears to be engaged in back-channel negotiations with the Taliban, an official Chinese recognition of the Taliban is unlikely to sit well in New Delhi because of China's ties to Pakistan, furthering India's already strained relationship with China over territorial disputes in the Himalayas.

It is also unclear whether the United States would eventually recognize the Taliban as the official leadership of Afghanistan. As it stands now, China and the United States already have many disagreements, but Afghanistan has traditionally been an area where the two sides have generally agreed, for instance on the need for national reconciliation. However, that could change if Beijing recognizes the Taliban and Washington does not, adding yet another layer of challenges to an already fraught U.S.-Chinese relationship.

Alternatively, a souring Chinese relationship with the Taliban could place new pressure on the China-Pakistan partnership. Beijing might expect counterterrorism results from Islamabad that the latter is unable or unwilling to produce. Pakistan may worry that its own terrorist problems—not just with Tehrik-i-Taliban, but Lashkar-e-Taiba, Jaish-e-Mohammed, and other groups as well—could become worse if they are prevented from operating in Afghanistan. Just last week, Beijing and Islamabad initially disagreed over the cause of a bus explosion that killed Chinese workers traveling in Pakistan for a Belt and Road project. Islamabad originally said it was a mechanical malfunction, while Beijing called it an attack. In the end, Islamabad acknowledged it was the latter. This recent episode suggests that despite their close partnership, tensions over terrorism already exist and might get worse if the Taliban retake Afghanistan—and Pakistan cannot rein in attacks against Chinese interests in either country. This problem, however, is almost certainly manageable given the decades-long, all-weather partnership between China and Pakistan.

On the whole, Beijing is set to benefit significantly if the Taliban come to power again in Afghanistan, and it is worth following this dynamic closely in the coming weeks and months.

This commentary originally appeared on Foreign Policy on July 21, 2021. Commentary gives RAND researchers a platform to convey insights based on their professional expertise and often on their peer-reviewed research and analysis.