Chinese Recognition of the Taliban Is All but Inevitable 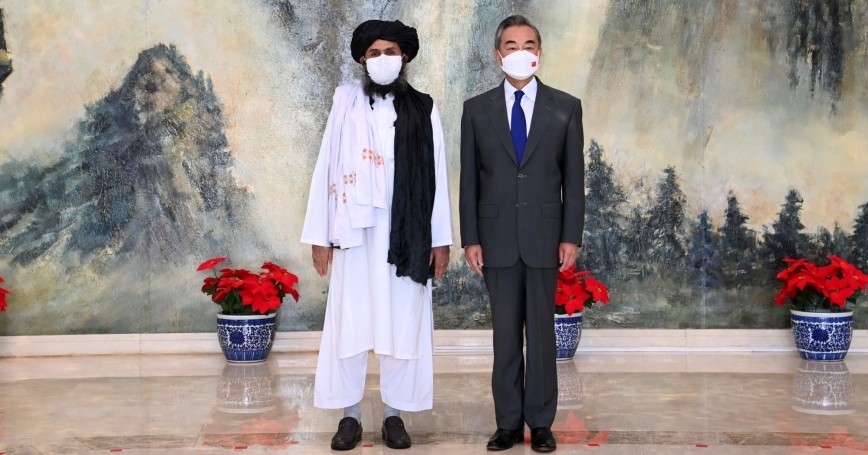 Photo by Li Ran/Xinhua via Reuters

Now that the Taliban have seized power in Afghanistan, China is likely to recognize and legitimize the new leadership within the coming weeks or months. Prior to the fall of Kabul, Beijing's official position was to support reconciliation between the warring sides—even as it officially engaged with the Taliban since 2019 and unofficially for several years before that. On July 28, Chinese Foreign Minister Wang Yi welcomed Taliban representatives for consultations in Beijing, the most visible sign of warming Chinese-Taliban relations yet. Just before the Taliban took control, there were already reports Beijing was planning to recognize a Taliban regime.

Since the fall of Kabul, Beijing's statements have been friendly but circumspect. On August 16, one day after Kabul fell, Chinese Ministry of Foreign Affairs (MFA) spokesperson Hua Chunying was asked about potential recognition. She said, “We hope the Afghan Taliban can form solidarity with all factions and ethnic groups in Afghanistan and build a broad-based and inclusive political structure.” That same day, Chinese United Nations envoy Geng Shuang echoed the statement but also noted, “Afghanistan must never again become heaven for terrorists… We hope that the Taliban in Afghanistan will earnestly deliver on their commitments and make a clean break with the terrorist organizations.”

On August 18, there came the strongest hint yet at official recognition of the Taliban by China. “It is a customary international practice that the recognition of a government comes after its formation,” MFA spokesperson Zhao Lijian said. Most recently, on August 25, an MFA spokesperson, when asked about a reported meeting the previous day between Taliban representatives and the Chinese ambassador to Afghanistan, said Beijing “stands ready to continue to develop good-neighborliness, friendship, and cooperation with Afghanistan and play a constructive role in Afghanistan's peace and reconstruction.”

It's still the early days under Taliban rule, so China is understandably cautious. Beijing is concerned the Taliban may reengage in illicit narcotics trafficking to fund their government and return to supporting terrorist attacks outside Afghanistan. Beijing worries the Taliban's spectacular success might embolden alleged members of the Eastern Turkistan Islamic Movement, which Chinese authorities have controversially designated as a separatist and terrorist threat in the northwestern Xinjiang province. To date, China has predominantly relied on its “ironclad brother” Pakistan to do the heavy lifting to prevent fighters from entering Xinjiang or otherwise supporting the outlawed group.

The good news for Beijing is the Taliban are saying all the right things to assuage Chinese concerns. In July, Taliban spokesperson Suhail Shaheen noted, “We care about the oppression of Muslims, be it in Palestine, in Myanmar, or in China, and we care about the oppression of non-Muslims anywhere in the world. But what we are not going to do is interfere in China's internal affairs.” During their first-ever press conference on August 16 after seizing power, the Taliban spokesperson said, “We want to reassure that Afghanistan will not be used against anybody.”

China will likely be eager to expand its Belt and Road Initiative by building road and rail connections into and throughout Afghanistan.

The Taliban have also reassured China that post-war Afghanistan will welcome infrastructure and investment projects. “China is a friendly country, and we welcome it for reconstruction and developing Afghanistan,” the Taliban promised on July 10. “If [the Chinese] have investments, of course we will ensure their safety.” After the takeover, on August 19, the Taliban reiterated that Beijing's role was welcome. If Afghanistan becomes sufficiently safe and secure, China will likely be eager to expand its Belt and Road Initiative—shunned by the previous Afghan government to avoid angering Washington—by building road and rail connections into and throughout Afghanistan. As yesterday's terrorist attack on Kabul's airport demonstrates, the situation on the ground remains fluid and potentially dangerous for Chinese nationals working on infrastructure or other projects.

This new transportation infrastructure, including planned thoroughfares through the narrow Wakhan Corridor that links the two countries, would significantly enhance Beijing's ability to access Afghanistan's natural resources. According to a 2014 report, Afghanistan may possess nearly $1 trillion worth of extractable rare-earth metals locked within its mountains. Beijing further has its eye on projects that languished under the previous Afghan government due to a combination of obstacles, including archaeological discoveries, security issues, and social impact. Under the Taliban, the future of these projects may be brighter. For example, in 2016, the Taliban offered protection for Chinese workers at the Mes Aynak copper mine near Kabul. If Afghanistan's new masters are so inclined, Beijing may finally get long-sought-after benefits from a major oil project in northern Afghanistan's Amu Darya basin.

Developments since the fall of Kabul strongly suggest China and the Taliban have started off on the right foot. This week, the Taliban spokesperson confirmed the two sides are actively discussing their bilateral relationship, including Chinese humanitarian assistance.

Their cooperation spirit may not last, however, if the Taliban are insincere about their promises, especially on cutting ties to the Eastern Turkistan Islamic Movement or allowing Chinese investment projects in Afghanistan. Beijing is probably waiting to see whether the Taliban can be trusted and will rely on Islamabad for insights about and influence over the new Afghan leaders. The Pakistanis, of course, know them well after supporting them for several decades.

Even if Beijing cannot find a way to trust the Taliban, it is unlikely to withhold official recognition for much longer. It wants to avoid sowing distrust, which could lead the group to reverse its promises. Moreover, China, as a new great power in competition with the United States, probably wants to demonstrate its unique way of handling world events, which tends to be—often reflexively—the opposite of Washington's approach. Perhaps most importantly, recognizing Taliban-run Afghanistan would contribute to the perception that it is Beijing—and no longer Washington—that is now setting the agenda and shaping the future regional order.

Alternatively, China may decide never to verbalize official recognition and opt for de facto recognition instead. We have seen China do this with regard to the military junta that seized control in Myanmar earlier this year. But that situation is fundamentally different: Unlike in Myanmar, there does not appear to be much viable resistance to Taliban rule. What's more, China may feel it has a stronger hand to play in Afghanistan, given it has an enormous asset in its ally Pakistan, which China can employ to try to keep the Taliban true to their words.

China did not recognize the Taliban when the group first ruled Afghanistan between 1996 and 2001. Today's China, however, is very different: For one thing, it has truly global interests and stands in geopolitical competition with the United States. Afghanistan's natural resources are of heightened importance to China's economic development. Additionally, China likely seeks to leverage a friendly Afghanistan—in concert with Pakistan—against India, which has emerged as a formidable regional rival and with which it clashed militarily only last year.

Cold, hard national interests matter to Beijing, not the protection of human rights or the democratic process in Afghanistan.

Since Chinese President Xi Jinping took power in 2012, Chinese assertiveness has continuously increased throughout the Indo-Pacific. This suggests Beijing will not be inhibited by the global reputational costs of recognizing the Taliban. In fact, the Islamic State attack on Kabul's airport may actually portray the Taliban, which have their own terrorism problem with the Islamic State, as a comparatively moderate and stabilizing force, further spurring their recognition by China. Beijing also prides itself on its no-strings-attached approach to foreign policy, meaning it is unlikely to get hung up by the Taliban's likely brutality in ruling Afghanistan. Cold, hard national interests matter to Beijing, not the protection of human rights or the democratic process in Afghanistan.

We should therefore not be surprised by an official Chinese recognition of Taliban-run Afghanistan. Even if China has real concerns about the Taliban's willingness to keep their promises, the potential geostrategic and economic windfall of the bilateral relationship is simply too great for Beijing to ignore. Just as importantly, a delay in giving the Taliban the recognition and legitimacy they crave risks angering the group, which could seriously harm Beijing's security interests. All the risks and rewards point at growing and solidifying Chinese-Taliban ties.

This commentary originally appeared on Foreign Policy on August 27, 2021. Commentary gives RAND researchers a platform to convey insights based on their professional expertise and often on their peer-reviewed research and analysis.