Help, Not Just Hunt, Violent Extremists in the Military 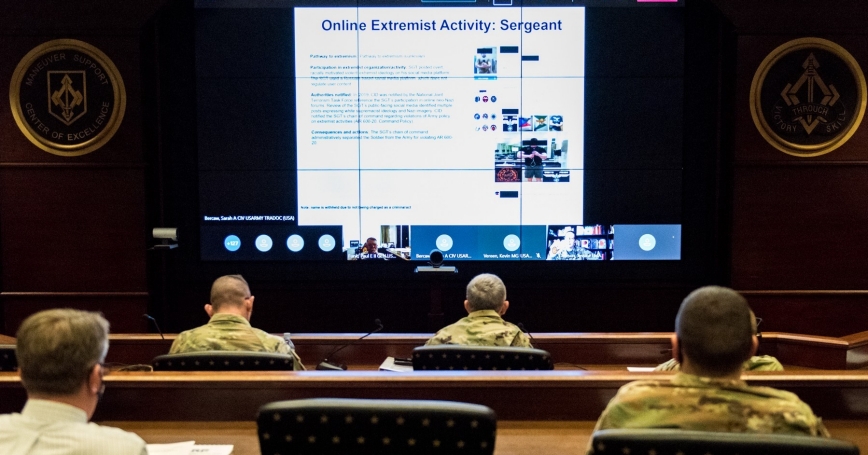 The Pentagon is working to rid itself of violent extremist members. In addition to strengthening the chain of command to detect and remove extremist members from its ranks, the military could also empower military family members to intervene.

Ever since the discovery that current and former military personnel played a significant (PDF) role in the January 6 insurrection, the Pentagon has taken steps to counter extremism in the armed forces.

It implemented a Department of Defense (DoD) wide stand-down to educate the force on extremism and reinforce the oath of service, and it has enacted tougher screening protocols to catch extremists before they can enlist. The DoD also created a Countering Extremism Working Group (PDF) that is preparing to offer the secretary a slate of new policy proposals.

Among these proposals, the working group may recommend steps to better train and empower commanders and NCOs to identify extremist members and report them to the chain of command. Thorough investigations could then follow, and if an individual's extremist views or behavior were shown to negatively affect his or her duties, that individual could face discharge from service.

This may be a necessary approach, but it could drive extremists, fearful of dismissal, underground. And it might sidestep an audience most critical to reversing the tide of extremism: family members, spouses, life partners, and friends.

Our own research has documented that violent extremism is not a dead-end path. In characterizing the lives of 32 domestic extremists, we found that many left extremist organizations and turned away from hateful ideology. They did this not from threats from employers or law enforcement but from the patient assistance of family members and friends, including members of groups they once hated.

A helpful intervention was one that was offered with support and kindness and that exposed extremists to diverse cultures and the hated minority or group.

Indeed, most of those in our study described interventions by life partners, friends, former radicals, or acquaintances from different racial or ethnic groups. And a helpful intervention was one that was offered with support and kindness (as opposed to anger, judgment, or punishment) and that exposed extremists to diverse cultures and the hated minority or group.

A small but growing network of civil society organizations is now implementing these types of interventions to help people walk away from extremism. For example, the nonprofit Parents for Peace has developed a hotline that family members and friends can call to learn how to help loved ones caught in the grip of extremism. Parents for Peace and organizations like Beyond Barriers and Life After Hate draw on a network of former violent extremists to help counsel individuals through the deradicalization process.

The Pentagon could provide channels that are outside the chain of command to help extremist service members and their families. First, they could provide a way for family members and friends to directly seek help either for themselves or for loved ones that might be headed down the path of extremism. The DoD could work with organizations like Parents for Peace to create and publicize helpline numbers that family members can call for emotional support and guidance. They could also provide a way for family members to secure professional assistance from civil society organizations that can develop interventions that motivate individuals to walk away from extremism and counseling that can give them the courage to do so. Finally, they could help evaluate the impact of these promising interventions, ensuring that prospective evaluations assess the degree to which interventions help family members and affected service personnel.

The Pentagon could provide channels that are outside the chain of command to help extremist service members and their families.

This type of direct outreach to families has precedent. The military employs a service called One Source, which provides military families access to a 24-hour hotline and nonmedical counseling. And Veterans Affairs has developed a national telephone service, Coaching into Care, which aims to support and empower family members and friends who are seeking care or service for a veteran.

The Pentagon could protect the U.S. military and its mission by identifying and removing those whose extremist beliefs and behavior threaten the force. But family and friends could also play a critical role in helping extremists walk away from hate and violence before it's too late. And the Pentagon could help them do it.

This commentary originally appeared on RealClearDefense on August 5, 2021. Commentary gives RAND researchers a platform to convey insights based on their professional expertise and often on their peer-reviewed research and analysis.