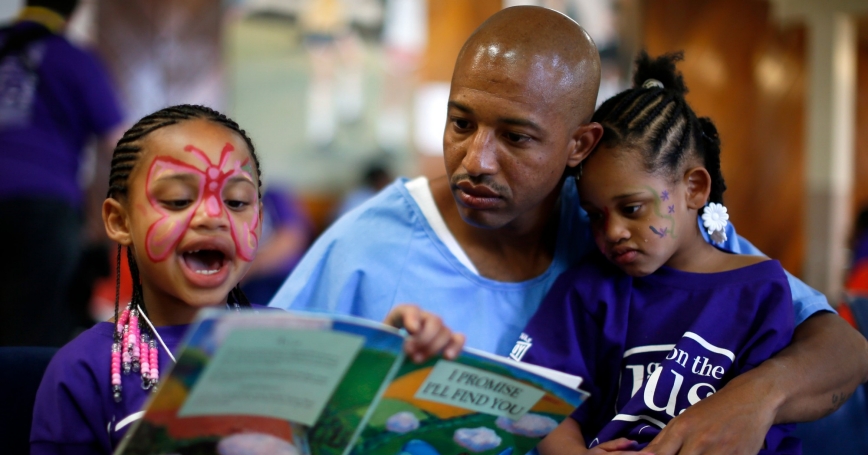 Donte, 34, reads a book with his two daughters during a visit at San Quentin State Prison, June 8, 2012

Mass incarceration has contributed to significant, harmful, and lasting racial and class disparities in America's federal and state prisons. In 2017, for example, Black people accounted for 12 percent of the U.S. population, but represented 33 percent of individuals sentenced to prison. And because a large percentage of inmates have children, this disproportionately high rate of incarceration means that one in 10 Black children has an incarcerated parent.

What could be done to better support incarcerated parents and, in turn, the well-being of their children and families? That's the central question of a study being conducted by RAND policy researchers Dionne Barnes-Proby and Celia Gomez, and postdoctoral research fellow Monica Williams.

As part of a series of conversations about ongoing projects in RAND's growing portfolio of high-quality research on racial equity policy, Barnes-Proby, Gomez, and Williams discussed with RAND president and CEO Michael D. Rich the current evidence on programs designed to support incarcerated parents, the gaps in research that they hope to fill, and why incarcerated people are so often overlooked.

Michael D. Rich: How does having an incarcerated parent affect children and families?

Celia Gomez: Parental incarceration puts a strain on the entire family system. In the cases of mothers and fathers who were living with their children prior to being incarcerated, it's a disruption to who's at home taking care of the kids every day, and that can affect kids' development.

The incarcerated parents also experience multiple stressors. Evidence suggests that there can be poor mental health outcomes as a result of being away from your child, and parenting from a distance can be extremely difficult. Incarcerated parents also often face issues with custody, so the potential loss of parental rights can also be really stressful.

Rich: What do we know about existing programs to support incarcerated parents?

Monica Williams: We've seen prisons offer programs for both male and female incarcerated parents. This might include having parents recording themselves reading books for their children; enhanced visitation options with toys, games, and educational props to help promote bonding; and parenting courses to help incarcerated people parent from afar. During COVID, there have been some changes; Zoom visits have been allowed in certain facilities, which has enabled parents to stay in touch with their children virtually.

But there's a lot we still don't know about the number and breadth of programs available to incarcerated parents across the country. We're using this project as a pilot study to better understand the landscape of existing programming, and we hope to expand our inquiry nationwide.

Incarcerated parents really are a forgotten population, because they are viewed as the offender, and they are not prioritized.

Rich: What are you hoping to learn?

Dionne Barnes-Proby: Right now, we want to know what's out there. The last survey to assess the landscape of the programming available for incarcerated parents was done 10 years ago. So, we're building on that to understand what programs exist, how they're being implemented, and what some potential best practices might be.

Gomez: The survey that we developed, which is currently in the field in five states, is intended for administrators in a facility—wardens and staff who are in charge of different social services for residents. It's designed to get at the nuts and bolts of what happens in these programs for incarcerated parents.

Rich: It's not difficult to imagine the answer to this question, but how did we get here?

Barnes-Proby: It's important for people to understand the role of systemic, institutional racism, by which I mean the policies in place that have disproportionately affected certain groups of people who are not more criminal than others. Programming could help to repair and restore what's been broken by these policies.

But so far, most of the programming to address this problem has focused on children. Children are viewed as the sympathetic victim, whereas the parents are seen as individuals who made bad decisions that put them in prison. We have to remember that, invariably, these folks return home, and they need to be equipped to better support their children. Incarcerated parents really are a forgotten population, because they are viewed as the offender—as the criminal—and they are not prioritized.

Williams: It's also important to note that the system is reactive. We're at a point where we already have this huge number of Black parents who are incarcerated. So the question has become, what do we do now? But imagine if the system asked a different question: How do we prevent this from happening in the first place?