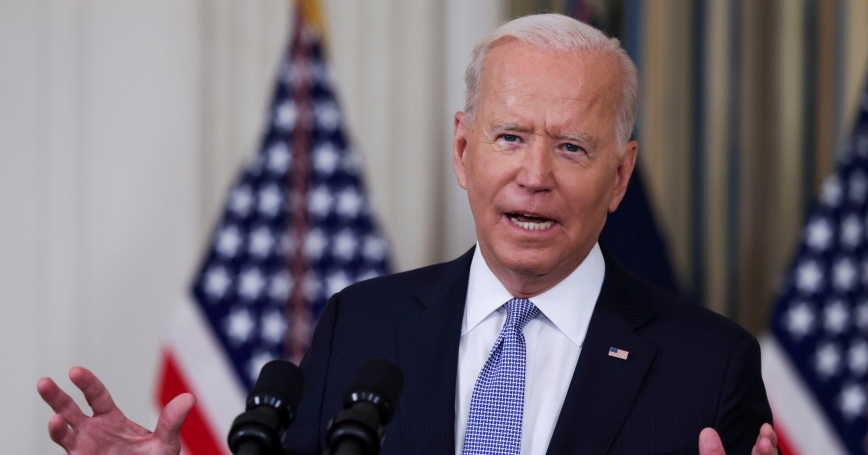 U.S. President Joe Biden responds to a question from a reporter in the State Dining Room at the White House in Washington, D.C., September 24, 2021

Indeed, from its very first day in office, the Biden administration set the tone for a strong U.S.-Taiwan partnership. Biden's new Indo-Pacific Coordinator, Kurt Campbell, invited Taiwan's de facto ambassador to the United States, Hsiao Bi-khim, to the presidential inauguration ceremony. This was the first time a Taiwanese envoy had been invited since Washington switched diplomatic recognition away from Taiwan (Republic of China) for the People's Republic of China (PRC) in 1979. During his Senate confirmation hearing in January to become Secretary of State, Antony Blinken argued in favor of keeping Trump-era guidance intact to end self-imposed contact limits with Taiwan. When Beijing later in the month flew an historic number of warplanes into Taiwan's air defense identification zone (ADIZ), the Biden-run State Department issued a lengthy statement of staunch support for Taiwan, in part reading: “We urge Beijing to cease its military, diplomatic, and economic pressure against Taiwan and instead engage in meaningful dialogue with Taiwan's democratically-elected representatives…the United States maintains its longstanding commitments as outlined in the Three Communiqués, the Taiwan Relations Act [TRA], and the Six Assurances…our commitment to Taiwan is rock-solid.”

In early March, the Biden administration released its Interim National Security Strategic Guidance, which noted that “We will support Taiwan, a leading democracy and a critical economic and security partner, in line with longstanding American commitments.” By mentioning Taiwan, the Biden team became only the second administration ever, after the Trump administration, to highlight Taiwan in a national security strategy, indicating the U.S. intent to ensure Taiwan's de facto sovereignty in the face of growing Chinese aggression.

Taipei should have no worries about Washington's commitment to [Taiwan].

During an extensive interview in April with Chuck Todd on “Meet the Press,” Secretary Blinken responded to Todd's question about whether the United States was prepared to defend Taiwan from Chinese attack. In a clear moment of reassurance to Taipei, Blinken stated: “All I can tell you is we have a serious commitment to Taiwan being able to defend itself…and in that context, it would be a serious mistake for anyone to try to change that status quo by force.” On April 16, President Biden welcomed then–Japanese Prime Minister Suga Yoshihide to the White House, and in their joint statement they underscored “the importance of peace and stability across the Taiwan Strait”—a rare statement of support showing Taiwan that the U.S.-Japan alliance could be brought to bear in cross-Strait conflict, if the proper conditions were met. At the end of April, while at the Aspen Security Forum, Biden's National Security Advisor, Jake Sullivan, noted that the Biden administration would “approach the Taiwan issue…with steadiness, clarity, and resolve with respect to our view that there should be no unilateral changes to the status quo.”

Then, in May, Blinken called for Taiwan to join the World Health Assembly in the face of Chinese opposition. In June, he announced the start of U.S.-Taiwan trade and investment talks, in effect reciprocating Taiwanese President Tsai Ing-wen's decision to allow U.S. pork imports, which had long been a fraught issue in Taiwan. Secretary of Defense Lloyd Austin in late July visited Singapore as part of a three-country Southeast Asia trip. While there, he highlighted U.S. commitments to Taiwan in his prepared remarks, and when specifically asked whether he was concerned about the potential for a Chinese attack on Taiwan, he responded: “Nobody—no one wants to see a unilateral change to the status quo with respect to Taiwan. And again, we are committed to supporting Taiwan and its capability to—to defend itself…”

In early August, the Biden administration approved its first Taiwan arms sale. Shortly thereafter, the Taliban reclaimed Afghanistan, and Chinese propaganda went into overdrive to convince Taiwan that the United States was an untrustworthy security partner. Beijing sought to convince Taipei (and the world) that Washington's abandonment of Kabul was indicative of a particularly American approach to international affairs. During an interview with George Stephanopoulos of ABC News, Biden argued “We have made—kept every commitment. We made a sacred commitment to Article 5 that if in fact anyone were to invade or take action against our NATO allies, we would respond. Same with Japan, same with South Korea, same with—Taiwan. It's not even comparable to talk about that.” Although a senior Biden administration official later walked back the president's statement, noting that the U.S. “One China” policy—i.e., only recognizing the PRC as “China” and acknowledging its position on Taiwan—had not changed, it does offer a glimpse into Biden's thinking on the matter. In essence, Biden considers Taiwan, as a like-minded democratic partner under threat from authoritarian China, to be on par with official U.S. allies Japan and South Korea. That should not be lost on Taiwanese leaders. A few days later, National Security Advisor Sullivan stressed that Taiwan has nothing to worry about in the context of Afghanistan. He said: “We believe our commitments to our allies and partners are sacrosanct and always have been. We believe our commitment to Taiwan and to Israel remains as strong as it's ever been.”

Secretary Blinken reinforced Sullivan's point in mid-September during testimony before the House, stating in response to a question about whether the United States is still committed to Ukraine and Taiwan post-Afghanistan: “Absolutely, we stand by our commitments to both countries.” As a side note, this was the second time Blinken had referred to Taiwan as a “country” since the beginning of his tenure. The Biden administration has further supported Taiwan's application to become a member of the Comprehensive and Progressive Agreement for Trans-Pacific Partnership (CPTTP), a multilateral trade framework. China has predictably opposed Taiwan's inclusion and has applied for membership itself.

When China deployed an unprecedented number of nearly 150 warplanes into Taiwan's ADIZ starting on the PRC's National Day, on October 1, and stretching through October 4, the Biden administration released a similar statement from late January, reaffirming its “rock solid” commitment to Taiwan. On October 5, President Biden stated that he had an “agreement” with Xi on Taiwan, which the White House later clarified to mean the TRA. Sullivan also met with Chinese State Councilor Yang Jiechi in Switzerland on October 6, in part to bring down the temperature in cross-Strait relations.

Throughout its time in office, the Biden administration has demonstrated U.S. military resolve to defend Taiwan if needed by routinely dispatching warships to transit the Strait.

Finally, it is important to highlight that throughout its time in office, the Biden administration has demonstrated U.S. military resolve to defend Taiwan if needed by routinely dispatching warships to transit the Strait. To date, the United States has sent ten warships, one for every month thus far, including a joint U.S.-Canadian transit late last week. Biden is persisting in a Trump administration trend which saw 13 such transits in 2020.

All of these positive words and deeds from the Biden administration should assuage any remaining concerns Taiwan might have about American security commitments, particularly since the fall of Afghanistan and Beijing's stepped-up military aggression toward the island. That said, there is ample reason for Taipei to continue to be vigilant of trends in U.S.-China relations and the potential implications for Taiwan. As I have discussed previously, the Biden administration has gone from a seeming no holds barred “extreme competition” against China, to more recently an approach that seeks “guardrails” in the relationship. It remains to be seen whether the Biden administration might seek cooperation with Beijing in exchange for a softer approach on Taiwan, most notably, for example, on climate change. This is highly unlikely, however, given the robust track record the Biden administration has in supporting Taiwan and the continued deterioration of U.S.-China ties.

Derek Grossman is a senior defense analyst at the nonprofit, nonpartisan RAND Corporation, an adjunct professor at the University of Southern California, and a regular contributor to The Diplomat.

This commentary originally appeared on Prospects & Perspectives on October 12, 2021. Commentary gives RAND researchers a platform to convey insights based on their professional expertise and often on their peer-reviewed research and analysis.