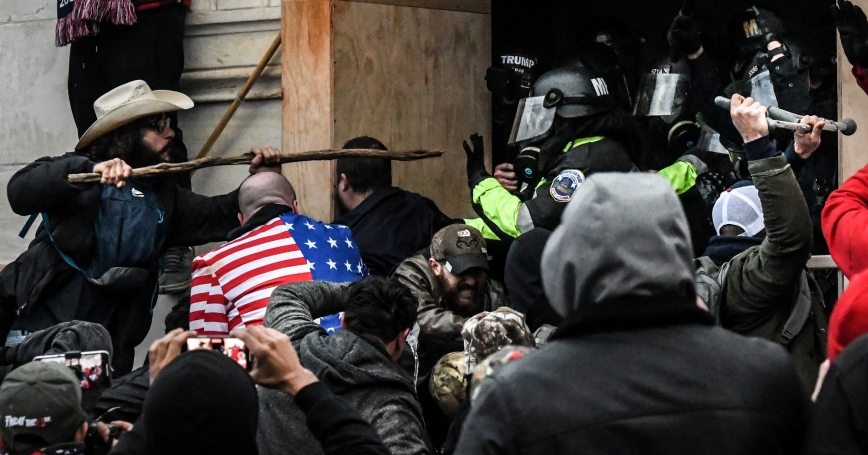 Trump supporters battle with police at the west entrance of the Capitol building in Washington, D.C., January 6, 2021

Changes in the perceived terrorist threat may have placed America at an inflection point. Following two decades of almost exclusive focus on the terrorist threat posed by the global jihadist enterprise and its homegrown supporters, the intelligence effort is now pivoting to address domestic violent extremism. This is an arena fraught with danger to the country, for the perceived foe is us.

The nation is deeply divided, its political system polarized. Getting counterterrorism wrong could make the situation worse. The challenge is to isolate and contain violent extremists without turning them into political martyrs or half the country into enemies of the state. That could require a rethinking of intelligence strategy.

Since 9/11, the paramount goal of domestic intelligence collection has been to prevent terrorist attacks. This meant uncovering and thwarting terrorist plots before they could be carried out—in police parlance, operating “left of boom.” The fear of further 9/11-scale attacks or even more alarming terrorist scenarios made prevention essential.

Swift action abroad dispersed al Qaeda's leadership, and an intense international intelligence effort reduced the possibility of more 9/11s. The United States suffered no further large-scale terrorist attacks from abroad. Instead, homegrown jihadists, inspired by jihadist ideology, carried out low-level, although at times lethal, attacks. Most of these were one-offs. There were no jihadist groups capable of carrying out continuing terrorist campaigns like those carried out by a variety of groups in the 1970s. Most of the plots and nearly all of the attacks involved a single perpetrator, acting alone with limited capabilities and resources.

The campaign against homegrown jihadists is not the model for dealing with domestic violent extremists.

Authorities uncovered and thwarted more than 80 percent of the jihadist plots, because tips from the community, information from informants or boasting on the internet brought plotters to the attention of the FBI or local police. Those who appeared to be intent upon violence were targeted for undercover operations. In the 20 years after 9/11, jihadists in the United States killed a total of 105 persons—49 in a single shooting at a nightclub in Orlando. While every death is tragic, of course, this was far fewer than many feared in the immediate shadow of 9/11.

But the campaign against homegrown jihadists is not the model for dealing with domestic violent extremists. Prevention may be more difficult to achieve for a variety of reasons.

The absence of a domestic 9/11 terrorist attack means there is no galvanizing event to unite the country in common cause. The Jan. 6, 2021 takeover of the Capitol has not created the same level of alarm and anger as the terrorist attacks on the World Trade Center and Pentagon. Political partisans cannot even agree whether it was a worrisome event.

Unlike the jihadists, domestic political extremists have a potential constituency. Jihadist ideology never gained traction in America's Muslim communities. Jihadists were isolated. In contrast, the beliefs motivating America's domestic extremists, especially those on the far right, run deep in American society. Reflecting antipathy toward what some see as a tyrannical federal government, fewer tips from the community can be expected. Informants may be harder to recruit.

Political divisions could constrain intelligence operations. Limiting intelligence is a mission where political conservatives and civil libertarians have united before, although for different reasons.

To move someone from chest-thumping extremist to person-of-interest requires reasonable suspicion of a link to terrorist activity—a legal threshold that allows the authorities to begin looking more closely at that individual's behavior and activities to see if there is a predicate to open a criminal investigation.

The “material support” provision of the Patriot Act made it a crime to join or otherwise assist designated terrorist groups such as al Qaeda or the Islamic State. The statute and the courts defined material support broadly. Offering any kind of assistance sufficed for prosecution, although in dealing with terrorist plots, police undercover operations sought to demonstrate that the suspect was willing to carry out an attack.

The absence of a domestic equivalent of the material provision statute means the predicate for investigation may be higher, which could mean that what constitutes reasonable suspicion may also be pushed higher. Merely joining an organization is not enough.

Some argue that the United States should have a domestic terrorist law. This would require legislation and official designation of terrorist organizations. In the current environment, however, congressional agreement on the definition of terrorism, let alone who's a terrorist, seems unlikely. Satisfying the views of both sides could lead to vague criteria, producing a list of hundreds of “terrorist groups,” or—worse—political horse trading—we'll give you antifa if you give us Proud Boys. Some of the names mentioned are not even organized groups, but rather broad movements or simply shared attitudes.

The legal campaign against domestic extremism is not an assault on beliefs, a crusade to root out antigovernment sentiments or to end racism. These are matters of national concern. But they lie beyond law enforcement, which is an effort to discourage violent crime by enforcing the law—identifying and bringing perpetrators to justice.

As it is, today's politicized atmosphere and deep political divisions will make prosecutions more difficult. The defendants are not motivated by some alien jihadist ideology. They are more likely to be named William or Robert or James than Mohammed. More cases are likely to come to juries where just one sympathetic juror can cause a mistrial. A mere nexus to a hate group will not suffice. Prosecutors will have to prove participation in preparing for or carrying out a crime.

Intelligence can aim at preventing group violence but most terrorist threats seem likely to come from individuals or tiny conspiracies on the fringes of larger movements.

The historical record and research on trial outcomes suggest that politicizing the prosecution by bringing charges such as seditious conspiracy, emphasizing political motives, or using terms such as “terrorism” or “insurrection,” may reduce the chances of conviction (PDF). Instead, prosecutors may want to focus on the violent crime, not the beliefs that motivated it.

Intelligence can aim at preventing group violence—larger conspiracies, planned standoffs, exploitation of public protests by infiltrators bent upon violence. In recent testimony before Congress, FBI Director Christopher Wray said that “we are focused very, very hard on how can we get better sources, better information, better analysis so that we can make sure that something like what happened on January 6th never happens again.”

But most terrorist threats seem likely to come from individuals or tiny conspiracies on the fringes of larger movements. The 1995 Oklahoma City bombing was carried out by one man and an accomplice, neither one acting within a larger organization.

Most of today's terrorists in the West are lone actors, self-selectors motivated by extremist ideologies, seeking recognition by outdoing other spectacular attacks. The rightwing extremist who in 2011 set off a bomb killing eight persons in Oslo, Norway, and who then gunned down 69 individuals at a nearby youth camp; the self-radicalized jihadist who in 2016 drove a truck through a crowd in Nice, France, killing 86 people; and the racist shooter who live-streamed his murder of 51 worshippers at a mosque in Christchurch, New Zealand, are examples. Like mass shooters, they will be hard to intercept.

A variety of programs aimed at identifying and dissuading individuals who appear to be on a path toward violence have been implemented, but the success of retail intervention as a preventive strategy remains unproven.

The current circumstances are different. Prevention of violent crimes remains a goal, but expectations may have to be tempered. While intelligence could be a critical component of America's counterterrorist strategy, there are reasons that it may also be wise to return to a more traditional approach that focuses on investigating violent crimes and bringing perpetrators to justice.

This commentary originally appeared on The Hill on October 5, 2021. Commentary gives RAND researchers a platform to convey insights based on their professional expertise and often on their peer-reviewed research and analysis.