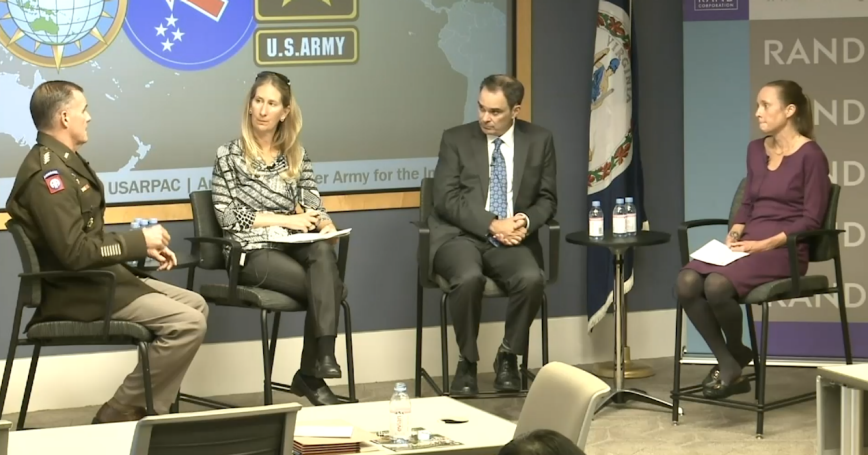 What is the U.S. Army's role in an oceanic theater that spans half the globe, where China increasingly asserts itself for strategic advantage?

Gen. Charles A. Flynn, head of the U.S. Army Pacific, said the nation's land force provides two distinct values in a maritime region: supporting allies and partners, and providing enabling capabilities to the Joint Force including sustainment and logistics.

“The Army provides foundational capabilities to the Joint Force to extend its operational reach, while also integrating on the ground with allies and partners who live and operate in the region every day,” Flynn said at a recent event at RAND's Washington office. The event was hosted by RAND vice president Sally Sleeper, who is director of the RAND Arroyo Center, which conducts research and analysis for the Army.

During its long history in the Pacific, Flynn said, the Army has seen a continuum of evolving strategic challenges. Those presented by China are just the latest. The Army's role at the turn of the 20th century in the Philippines, in World War II, the Korean War, and the war in Vietnam all demonstrate the importance of effective ground forces, he said.

“If we are going to effectively deter and compete in the Indo-Pacific, we must understand China and how it sees itself in the region,” Flynn said, adding that, “China's security concerns are almost all land-based.”

If we are going to effectively deter and compete in the Indo-Pacific, we must understand China and how it sees itself in the region. China's security concerns are almost all land-based.

U.S. Army Pacific provides the foundation that supports all joint operations in the Indo-Pacific, Flynn said. Matched to the needs of the Joint Force, as well as allies and partners, the Army delivers a persistent, distributed network of military capabilities throughout the region, he said.

Jennifer Kavanagh, director of Arroyo's Strategy, Doctrine and Resources Program, moderated a panel discussion after Flynn's opening remarks. She asked him to describe how U.S. Army Pacific is changing to meet the rising threat from China.

Flynn noted the 8th Theater Sustainment Command's approach to using prepositioned stocks and drawing out those stocks to apply during exercises; the 18th Medical Command's role in supporting exercises in addition to its standalone medical activities; and the 196th Infantry Brigade's role supporting training activities in the Joint Pacific Multinational Readiness Capability, which engages with allies and partners.

Flynn also emphasized the Army's role in buttressing U.S. partners and allies in the region, prompting panelist Michael Mazarr, a senior political scientist at RAND, to ask if the U.S. Army Pacific is able to meet the demand for joint exercises from other countries.

“We're meeting the demand, but the demands are increasing and we're looking to create new approaches,” Flynn replied.

Panelist Jennifer Moroney, a senior political scientist who formerly was director of RAND Australia, asked how Flynn is thinking about engaging allies and partners on the issue of military bases, ports, and other shared facilities in the region.

Training exercises, he said, can build crucial relationships—and that potentially helps heal difficult issues related to facilities and more. “Doing those exercises every year is a demonstration of our ability to be there even when times are tough,” Flynn said. “This past year with COVID-19 was a really good example of us being there.”

Kavanagh asked Flynn what deterrence means to him, and how the activities of the U.S. Army Pacific contribute to integrated deterrence.

There are four components to deterrence, he said: capability, posture, signaling, and will. By positioning its land forces forward into the Pacific theater, the Army is demonstrating all these. "That sends a message to adversaries that we seek to increase joint and ally and partner readiness,” Flynn said. “We want to create confidence in the region that we are going to be there when times are good but also when times are bad. I also think it denies some key terrain [to China] and some of the activities that they have underway in the region that are increasingly concerning.”