Is Russia About to Make a 'Serious Mistake' in Ukraine? 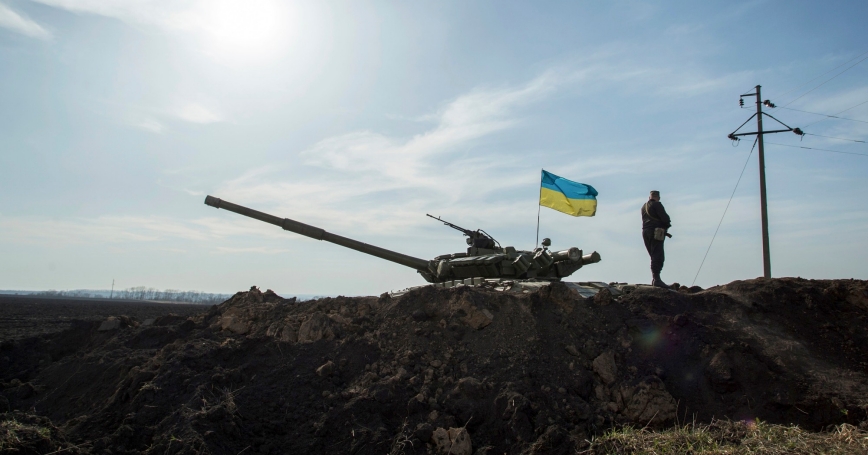 A soldier stands guard near a tank position close to the Russian border near the Ukrainian city of Kharkiv, March 24, 2014

Russian military shifts and stinging Kremlin criticisms of Ukraine are raising questions about Moscow's aims. In 2014, Russia's seizure and annexation of Crimea and invasion of eastern Ukraine led to a strong Western response—a jump in military aid to Ukraine, a NATO buildup on its eastern flank, and unprecedented sanctions. What could be in store now?

There are multiple reasons to be wary.

On November 1, Politico reported that satellite images showed a “buildup of armored units,” tanks, and self-propelled artillery in Russia near Belarus, and a relocation of tanks from near Moscow to Ukraine's border. President Biden's security advisor, Jake Sullivan, said the United States was consulting with allies and partners.

Kremlin rebukes also cause anxiety. On November 1, Foreign Minister Sergei Lavrov warned of “attempts to carry out provocations…and drag Russia into some kind of combat.” Some in the West might see this as cover for renewed aggression. On October 22, Russian President Vladimir Putin said a visit by Secretary of Defense Lloyd Austin to Ukraine had “opened doors” for it to join NATO. This is a distant prospect. Putin aide Dmitri Medvedev claims Ukraine's leaders are hostage to “rabid” nationalist forces, which is erroneous.

That said, the Kremlin's intentions regarding Ukraine remain uncertain. Some earlier troubling signs did not presage imminent threats. On November 3, Gen. Milley described Russian movements as not “overtly aggressive.” On November 8, however, CNN reported that earlier in the week in Moscow, Central Intelligence Agency Director William Burns had voiced “serious” concerns to Putin about Russia's military buildup along Ukraine's border. And on November 10, Secretary of State Antony Blinken warned Moscow against making a “serious mistake” in Ukraine.

Perhaps Moscow seeks only to discourage further Western military support for Ukraine. But if Russia were to heighten threats, the West could take stronger measures. Those the West took after 2014 might hint at how the West could raise costs to Russia.

The United States and NATO have provided substantial training, equipment, and advisory assistance to Ukraine. The United States has sent modern armed patrol boats and portable Javelin missiles, lethal against Russian tanks. In September, the United States announced further aid in response to the “major increase in Russian military activity” along Ukraine's border.

if Russia were to heighten threats, the West could take stronger measures. Those the West took after 2014 might hint at how the West could raise costs to Russia.

A second Western response has been NATO's eastern build-up of forces. It now rotates four battalion-sized land combat units to Estonia, Latvia, Lithuania, and Poland. A multinational brigade, including air power, rotates to Romania. Since 2014, the United States has spent billions of dollars (PDF) to enhance collective security in Europe.

A third dimension of the Western response is sanctions. They might have reduced Russia's economic growth by as much as 2.5-to-3.0 percent per year. Sanctions combined with the pushback by Ukrainian fighters against Russian forces in summer 2014 in eastern Ukraine might have helped dissuade the Kremlin from attempting to take all of eastern and southern Ukraine. The Kremlin had hinted that its goal was to seize what it calls Novorossiya.

If it were to become necessary, what new steps might the West consider?

One may be supplying a wider range of lethal weaponry. The U.S. House Committee on Armed Services has called for a Biden administration report on how to help Ukraine address air and missile defense gaps. The United States could send Ukraine portable Stinger air defenses or Iron Dome defenses against short-range missiles.

NATO could further buttress eastern defenses. A RAND study found that at present “NATO cannot successfully defend the territory of its most exposed members.” Wargaming suggests that a force of seven brigades could prevent a “rapid overrun” of the Baltics. This might involve an order of magnitude more combat power. NATO states could also send more warships into the Black Sea, subject to limits in the Montreux Convention.

Tougher sanctions might be a third response. Sen.Lindsey Graham (R-S.C.) warns of “sanctions from hell.” In 2017 by near-unanimous votes in both chambers, Congress passed a sweeping sanctions bill aimed mainly at Russia. A recent Biden administration review cautioned that economic and financial sanctions are best used in “collaboration with our allies (PDF).” In 2014, such coordination with Europe amplified the effect of Western sanctions.

Now is probably not the best time to be breathless about the risk of increased Russian threats in Ukraine. This may, or may not, be Moscow's purpose. But the West will be watching.

This commentary originally appeared on The Hill on November 13, 2021. Commentary gives RAND researchers a platform to convey insights based on their professional expertise and often on their peer-reviewed research and analysis.