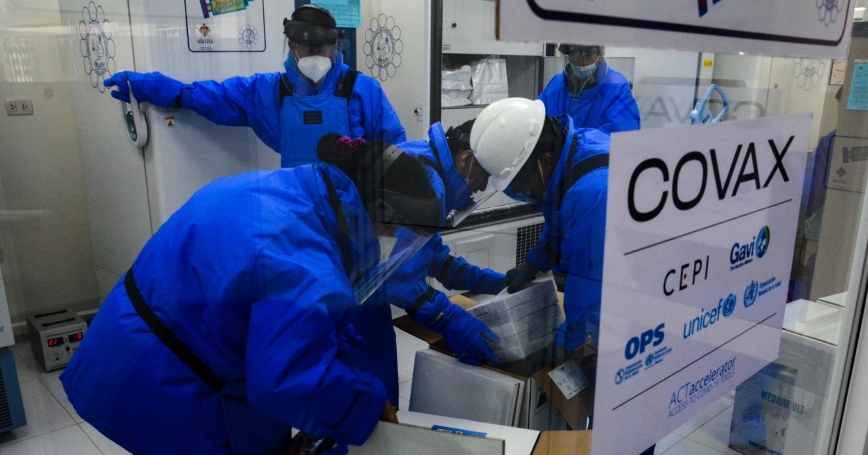 Authorities receive a shipment of COVID-19 vaccines donated by the United States through the U.N. Covax program in La Paz, Bolivia, September 26, 2021

With the World Health Organization's announcement of the Omicron variant of COVID-19 and the identification of the variant in the United States, there is renewed attention to the global threat imposed by COVID-19. Even with vaccination and boosters in the United States, new variants are likely to arise in other countries that may be more resilient to vaccination, spread more easily, or be more likely to cause severe consequences, such as hospitalization and death. As the U.S. government considers new plans to share vaccines with other nations, understanding whether Americans value sharing, particularly given Omicron, is even more important. There has been significant and warranted concern about vaccine nationalism at the country level, but we endeavored to understand whether attitudes that may underlie this concern are expressed by the American public.

In September 2021, RAND asked a group of 1,753 Americans about their views of sharing vaccines with other countries. This was part of a final survey in a longitudinal study of American health mindset and COVID-19 experiences, funded by the Robert Wood Johnson Foundation, conducted at four time points between summer 2020 and fall 2021.

Over two-thirds of respondents strongly or somewhat agreed that the United States should send extra vaccines to other countries.

While the Delta variant was still affecting Americans in September 2021, nearly 60 percent of Americans reported that they agreed that if the United States did not help to fight the spread of COVID-19 in other countries, it would put the country at risk.

Overall, American support for sharing vaccines globally was high even before the most recent variant. This is a cause for optimism for two reasons. First, while findings about American health mindset, including in this set of surveys, have often underscored a sense of health individualism, in this case, there appears to be a deeper understanding of the benefits of acting at a global level.

Further, these findings may reflect an American recognition of the interdependence inherent in pandemics and the benefit from proactively addressing the issue beyond U.S. borders to truly be on the path to pandemic recovery.

Katherine Carman is a senior economist and Anita Chandra is vice president and director of RAND Social and Economic Well-Being and a senior policy researcher at the nonprofit, nonpartisan RAND Corporation.