Biden's Southeast Asia Policy Still Has Much to Prove 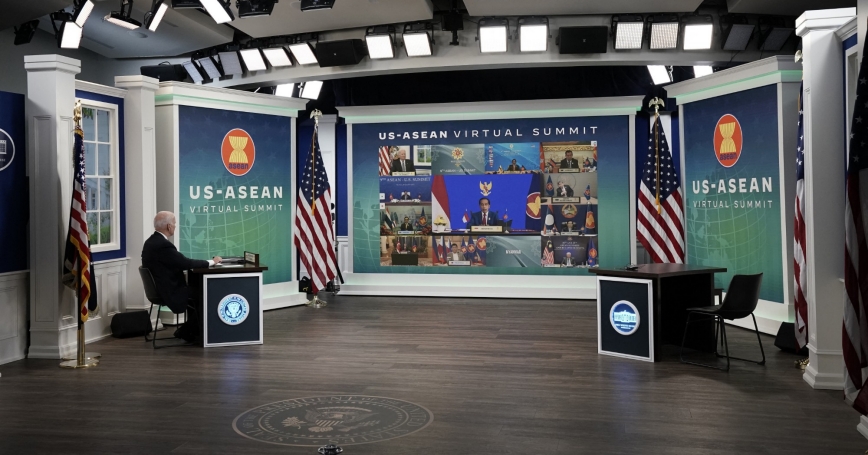 As the Biden administration's first year comes to a close, how is the United States faring in Southeast Asia, a region critical to winning the strategic competition against China in the Indo-Pacific? The returns are mixed, and there are worrying trends. Despite one year of honing an Indo-Pacific strategy, Washington is still no closer to a clear trade agenda that might counteract some of China's massive economic pull on the region. And as critical as it is to defend democracy at home and abroad, U.S. President Joe Biden's emphasis on values and democracy promotion will make it difficult to engage a region dominated by autocracies and near-autocracies in the quest to outcompete China.

First, the good news: Biden's overarching goal to place allies and partners at the center of his foreign policy is clearly visible in Southeast Asia. A flurry of senior U.S. officials have already visited the region, including Vice President Kamala Harris (Singapore and Vietnam), Defense Secretary Lloyd Austin (Singapore, the Philippines, and Vietnam), Deputy Secretary of State Wendy Sherman (Indonesia, Cambodia, and Thailand), newly-minted Assistant Secretary of State for East Asia Daniel Kritenbrink (Malaysia, Indonesia, Singapore, and Thailand), and Secretary of State Antony Blinken (Indonesia and Malaysia—Thailand was cancelled due to a COVID-19 case in Blinken's circle) just this week.

Blinken has also met virtually with Association of Southeast Asian Nations (ASEAN) foreign ministers, and both Blinken and Austin have hosted some of their Southeast Asian counterparts in Washington. Sherman last week likewise met with all 10 ASEAN ambassadors to the United States. Perhaps most crucially, Biden virtually attended the U.S.-ASEAN summit and the East Asia summit—reversing years of lower-level U.S. participation that had offended regional leaders.

Apart from showing up—which itself is an essential ingredient to success—the Biden administration also has dialed back some of its tough language on competition with China. In February, Biden said Washington was in “extreme competition” with Beijing. But before Sherman traveled to China in July, she said she was seeking out potential areas of cooperation and called for “guard rails” in U.S.-Chinese relations to avoid unnecessary escalations by either side. That shift in tone was welcomed throughout Southeast Asia. Even the nations that would most benefit from a hardline U.S. stance on China, such as Vietnam and the Philippines, do not want war in their region.

Relatedly, the Biden team has made clear that no Southeast Asian country is required to align with the United States. Rather, Washington argues that the region should prioritize maintaining a rules-based order and “free and open” Indo-Pacific—parenthetically suggesting that Beijing seeks the opposite. That plays well in Southeast Asia, where countries certainly do not want to be pressured into alignment with either Washington or Beijing, which could result in retaliation from the other.

The Biden administration has focused on upholding international law in the South China Sea as well. Specifically, Blinken in July reiterated the Trump administration's policy to recognize maritime exclusive economic zones (EEZs) claimed by Indonesia, Malaysia, the Philippines, and Vietnam. That stance takes direct aim at China's so-called nine-dash line claim, which would gobble up approximately 90 percent of the South China Sea based on what Beijing says are its historical rights instead of sharing the sea according to international law. Blinken's announcement was also meant as a tangible sign that the United States can be counted on—this time. Southeast Asian interlocutors routinely point to U.S. inaction when discussing China's annexation of the Scarborough Shoal, located inside the Philippines' recognized EEZ, in 2012. The event fundamentally shook faith in U.S. security commitments.

The good news: Biden's overarching goal to place allies and partners at the center of his foreign policy is clearly visible in Southeast Asia.

Another positive trend is that U.S.–Southeast Asian relations under Biden have been about more than China. The administration has a broad international agenda that includes climate change, global supply chains, and pandemic recovery, among many other points. In Singapore, Austin smartly couched U.S. policy in the context of empowering average Southeast Asians, highlighting hot-button topics in the region like fishing rights and underwater oil and gas deposits “afforded them by international law.” This approach will likely have greater impact than focusing just on China's bad behavior, which tends to be more politically divisive.

The Biden administration has also made strides on another Southeast Asian challenge not directly related to China: post-coup Myanmar. Washington has consistently criticized the Tatmadaw and called for a restoration of civilian control—echoing the position of many, if not most, of Myanmar's fellow ASEAN members.

Finally, although the Biden administration champions human rights, freedom, and democracy as integral to its foreign policy, its language has cooled when speaking with Southeast Asian partners whose governance is authoritarian or semiauthoritarian. Austin's speech in Singapore, for instance, characterized U.S. democracy as flawed, implying that both Southeast Asian nations and the United States must make continual improvements. (Blinken did the same thing one day later in India, a democracy that has become increasingly illiberal.) A softer touch on values will especially help improve relations with U.S. allies and partners who are key to competing against China but also authoritarian, such as Singapore, Vietnam, and Thailand.

It's not all good news, however. Biden's decision not to call a single Southeast Asian leader for a bilateral chat during his first year is troubling. By contrast, Biden has already met with Japanese, South Korean, Australian, and Indian leaders at the White House to underscore the importance of the Indo-Pacific. Southeast Asian interlocutors are in the dark as to why they cannot even secure a phone call. That said, the Biden administration's reported plan to host a U.S.-ASEAN Summit at the White House in January would likely go a long way toward improving the atmosphere.

Likewise, the fact that Blinken only just now made his maiden visit to the region sends another signal that Southeast Asia is low on the priority list. In an unfortunate episode, a technical glitch prevented Blinken from participating in an ASEAN foreign ministers virtual call in May, reportedly angering the Indonesian foreign minister so much that she refused to turn on her video feed. ASEAN countries are very sensitive about feeling neglected or marginalized.

Separately, the Biden administration's Summit for Democracy last week reinforced who Washington plans to prioritize. Just three ASEAN members were included in the proceedings—Indonesia, Malaysia, and the Philippines—leaving out key U.S. allies and partners Singapore, Thailand, and Vietnam. Casting the global order in terms of democracy versus autocracy is unlikely to resonate well in mostly authoritarian Southeast Asia.

Most importantly, Washington still lacks an Indo-Pacific strategy, which contradicts the Biden administration's repeated labeling of the Indo-Pacific as its priority theater and is sowing confusion among Southeast Asian officials. To be fair, the Trump administration did not issue its Indo-Pacific Strategy Report until 2019. The Interim National Security Strategic Guidance released in March covered the Indo-Pacific, but key details are missing. Adding to Southeast Asia's continued frustrations, in his speech in Jakarta, Indonesia, this week, Blinken only spoke about a “vision” for the region, not a “strategy.” Without a serious, formulated strategy in place, Southeast Asia isn't sure what to expect of Washington's future presence in the region.

Southeast Asia is also generally worried about extra-regional coalitions that could threaten so-called ASEAN centrality—the desire to act as a unified bloc—not to mention peace and stability. For instance, the United States participates in the Quadrilateral Security Dialogue, or Quad, along with Australia, India, and Japan. The four democracies implicitly seek to counter China's coercive behavior throughout the Indo-Pacific. To date, no ASEAN member is a part of this group nor has any country explicitly sanctioned it. Of all ASEAN members, the participation of the Philippines in the Quad would make the most sense, but even if Manila were interested, such a step would create new rifts in the region.

Getting ambassadors confirmed into Southeast Asia has also been slow. At present, the Biden administration has only managed to send one confirmed ambassador to the region: Jonathan Kaplan, who just assumed his post in Singapore earlier this month. In the case of Indonesia, Ambassador Sung Kim doesn't even focus on the country full-time; he sits in Jakarta but splits his time between U.S.-Indonesian affairs and his duties as Biden's special envoy to North Korea. Such arrangements bolster the narrative that Southeast Asia is still not Washington's priority.

Washington does not seem to have any realistic ideas to counter China's inescapable economic pull on Asian countries.

Finally, the Biden administration still has no regional economic or trade policy to speak of. Ever since the Trump administration withdrew from the Trans-Pacific Partnership, the United States has not come up with a viable alternative, be it due to incapability, unwillingness, or both. Now rebranded as the Comprehensive and Progressive Agreement for Trans-Pacific Partnership, the successor trade pact excludes the United States but includes several Southeast Asian members. China, meanwhile, has joined the ASEAN-lead Regional Comprehensive Economic Partnership (RCEP), where Australia, Japan, New Zealand, South Korea, and the 10 ASEAN states are members. As a bloc, RCEP now accounts for approximately one-third of global GDP. Beijing also has leveraged its economic prowess through its Belt and Road Initiative, a global investment and infrastructure program that is well suited to Southeast Asian needs. Washington does not seem to have any realistic ideas to counter the initiative—or, more generally, China's inescapable economic pull on Asian countries.

The Biden administration got a lot right in Southeast Asia in its first year. But it could do better to optimize competition against China, beginning with formulating a clear Indo-Pacific strategy—including economy and trade—and putting the personnel in place to execute it. The administration also needs to work on a more sensitive understanding of the delicate and at times precarious position Southeast Asian states are in as they deal with their much more powerful northern neighbor. If it heeds these points, the Biden administration's next three years should be much more successful in Southeast Asia.

This commentary originally appeared on Foreign Policy on December 16, 2021. Commentary gives RAND researchers a platform to convey insights based on their professional expertise and often on their peer-reviewed research and analysis.